We take the most powerful E-Class, yet, for a short spin around India’s only F1 track 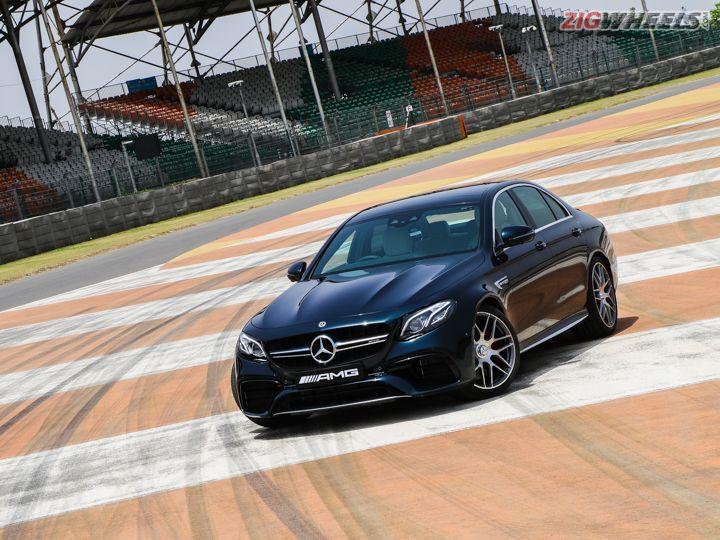 You say Mercedes-AMG, and the first image that pops up in your head would most likely be of a sedate looking family sedan burning its tyres to shreds around a corner while shrieking at the top of its lungs. But not all AMG saloons are like that… we are kidding, they are all like that and the new E63 S should be no exception. There is, however, one exception. The new E63 S comes with the 4MATIC+ AWD system which should make it ‘more controllable’ and a better track tool. The Mercedes-AMG E63 S has been priced at Rs 1.5 crore (ex-showroom India). In comparison, its chief rival, the BMW M5, retails for Rs 1.44 crore. So you can say it is priced rather aggressively. At the occasion of the launch, Mercedes India also gave us journalists a short spin in its most powerful AMG saloon around the BIC. Though we couldn’t test the limits of the car owing to the limited time, we did get a taste of just what the AMG is capable of. So does it trade the AMG lunacy for better lap times?

The first thing that gives the E63 away is the size. The AMG is based on the standard E-Class saloon and not the LWB model that is sold in India. It has a 140mm shorter wheelbase and is also 75mm shorter in length. Aesthetically, it is quite different from the E-Class at the front too. The bonnet is more muscular and the face is much bolder.

The wide gaping grille is complemented by two massive air intakes at the base of the front bumper that feed fresh air to the two turbos. From the side, you’d be hard pressed to differentiate it from the standard size E-class, barring the crimson red brake calipers and the 20-inch AMG sport wheels adorned with 265 section Michelin Pilot Sport rubber at the front and a 295 section tyres at the rear. The tail too looks quite familiar, apart from the spoiler that sits on top of the tailgate.

You can, however, opt for the AMG carbon-fibre package that gives you carbon-fibre ORVMs, a carbon-fibre spoiler and a few bits in the cabin as well to make your car stand out from the rest.

The cabin is quite like the one on the E-Class, but there are a few critical changes here. Unlike the E-Class, the AMG E63 S comes with a full virtual display that changes according to the mode you’re in. The COMAND system is in place as well and has the same operation as on the E-Class. There are, however, a few extra buttons on the centre console. There is a button with the image of the exhaust pipe, pressing which makes the car louder. There is a scroller that lets you toggle between driving modes such as Comfort, Sport, Sport+ and Race (the mode we were told to stay away from as it disengages the ESP).

The E63 S also gets optional AMG front seats that are ventilated and heated and have an extendable squab for extra comfort. Plus, you also get a flat-bottomed AMG steering wheel with Alcantara grips, unlike the conventional leather wrapped one on the standard car.

Let’s talk about the powertrain

But if you go for the optional AMG Performance pack, the top speed goes up to 300kmph. The engine is mated to a multi-clutch 9-speed gearbox with paddle shifters and the power is supplied to all four wheels via the 4MATIC+ AWD system which has been completely redesigned to offer continuously variable torque distribution to all four wheels depending on the traction each wheel has. The E63 S is the first car in India to get the multi-clutch system with continuously variable torque. The rear axle is fitted with an electronic LSD system and the car comes with a ‘drift’ mode as well, which essentially routes all the power to the rear wheels making it an RWD car when you feel like shredding your expensive soft compound tyres. And the drift mode will stay engaged until it is disengaged by the driver.

It also gets massive steel ventilated discs all around with tremendous stopping power. And, if you feel they are not exotic enough, you can opt for the optional AMG ceramic brake package that gets you massive ceramic brakes which are even more powerful and 40 per cent lighter than the standard ones.

It’s fast, really fast, bonkers fast. It’s sometimes beyond belief that something with four doors, three-zone climate control, a rear bench and a large boot can accelerate that hard and gather speed that fast. We just got one hot lap in the car and we drove it in the Sport+ mode as we were told to steer clear of the ESC button and the race mode.

0-200kmph comes up in the blink of an eye but what’s more mesmerising than the speed is the exhaust note that emanates from the quad exhaust. It sounds like the battle cry of the thunder god himself and every time you shift up, the overrun from the V8 is nothing short of explosions going off inside the exhaust system. The brakes work well and provide plenty of feel, but it’s the steering that steals the show (from what we could make out). The steering is well weighted and precise, and is extremely communicative - you know what the tyres are up to at all times so you can make minor adjustments mid-corner.

The suspension is well tuned to handle the track. Unfortunately, we can’t comment on its road characteristics yet. The E63 S is virtually flat through the corners, though it does feel heavy in the tighter ones and it doesn’t take too kindly to sudden changes in direction. But yet, it is an absolute hoot to drive. You’ll be redlining that beast of an engine just to hear the soundtrack, making the Burmester sound system kind of redundant.

It’s a performance saloon from the madhouse called AMG, what’s not to like? If you thought AWD would have made the E63 S less E63-like, it hasn’t. It is still every bit of a hooligan it used to be and remains the ideal car for someone who is a regular at track days and would rather take the corners sideways than kiss the apex. And although it is quite adept at carving corners, the drift mode is always more fun.