Two new launches in the sub-4 metre SUV space in a matter of a month - the Maruti Suzuki Vitara Brezza and the Mahindra NuvoSport. We put them in a head-to-head battle to find out which one stands tall 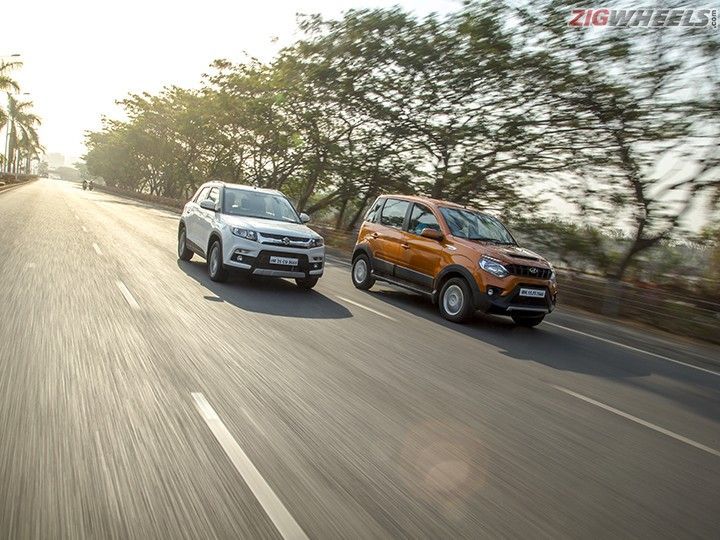 The sub-4 metre SUV class of cars has gained tremendous popularity in the last half a decade or so. Cars in this segment have the appeal of an SUV despite sporting dimensions that make them look straight out of ‘Honey I shrunk the Kids’. Moreover, with the kind of excise duty benefits that these cars get, they are priced well; making them extremely practical purchases.

Maruti Suzuki, couldn’t quite ignore this booming segment for long and recently brought in a well-rounded product in the Vitara Brezza. However, along with the Brezza, there is another new entrant in this segment, the Mahindra NuvoSport, and it is more than just a redesigned Quanto. For us, the compact SUV segment just got a lot more interesting…

Design is a matter of personal preferences and tastes. While some might prefer the subtle cues of the Vitara Brezza, others would love the bulky and rather flamboyant design of the NuvoSport. In terms of sheer size though, it is the NuvoSport that is definitely larger and more intimidating than the Vitara Brezza.

On the inside, Maruti Suzuki has played it safe by fitting an all-black dashboard which gets fine touches of brushed aluminium and piano black. It gets a large touchscreen infotainment with inbuilt navigation and Apple CarPlay. The placement of the buttons of the automatic climate control is not conventional and can take a bit getting used to. Built quality, although better than the NuvoSport, is far from impressive. The textured plastic on the upper half of the dashboard feels somewhat tacky and the gaps on the central panel aren’t consistent either.

The NuvoSport’s dashboard, on the other hand, looks somewhat similar to the Quanto, mainly due to its central air con vents. The textured plastic on the dashboard looks substandard and the quality isn’t something to write home about either. The NuvoSport doesn’t get an automatic climate control but makes use of the conventional knob layout instead, which by the way is extremely easy to use.

The seats on the Brezza are well bolstered but a bit too firm for our liking. The NuvoSport on the other hand sports wider seats but are not as supportive.

The NuvoSport’s wheelbase is longer than the Vitara Brezza thanks to which, it is able to make more space on the inside. Passengers in the second row not only have loads of leg and knee room but by pushing the wheels on both ends as far apart as possible, Mahindra has also been able to squeeze in jump seats at the back. Yes, the jump seats aren’t good enough for adults but even the 5+2 arrangement might attract a lot of buyers.

The Vitara Brezza is fairly spacious at the back but just not as roomy as its rival here. The Maruti offering is also not as wide as the Mahindra due to which three at the back might not be as comfortable. Moreover the NuvoSport gets a flatter floor at the back resulting in better foot room for the third row. Under thigh support on both cars is more or less the same. Both cars get plenty of stowage spaces in the cabin.

In terms of practicality, the Nuvosport stands tall here. It not only has the advantage of two extra seats, it has a bigger boot too. If that isn't enough for you, Mahindra has made enough space under the rear bench seat to fit a few laptop backpacks.

In terms of features and equipment, the Maruti offering comes with a longer list. Button start, keyless entry, Apple car play, navigation and projector headlamps are some features that are seen on the Brezza but are missing on the NuvoSport. The Brezza also gets a cooled glove box and automatic climate control. Additionally, the Vitara Brezza comes with a reverse camera while the NuvoSport makes do with just two parking sensors at the back. As far as safety is concerned, both cars come with front two airbags, ABS and EBD.

The large touch screen on the Vitara Brezza is easy to read and navigate. All the necessary information is on the instrumentation and right in front of your eyes. The touchscreen infotainment on the NuvoSport is an aftermarket one. The angle isn’t right for viewing and the interface isn’t exactly user-friendly either. The controls are too close to each other and require you to take your eyes off the road while navigating. And sadly, there are no buttons on the wheel to toggle between the songs or radio stations. Mahindra has placed the gear shift indicator, DTE, and some other information on the display screen at the top of the centre console, which isn’t the best place to do so.

The Vitara Brezza comes with the same 1.3-litre turbocharged diesel that we have seen on the S-Cross. In this state of tune, it makes 90PS of peak power at 4,000rpm and 200Nm of maximum torque at 1,750rpm. Although this unit makes less power and torque as opposed to the NuvoSport, the Brezza feels quicker to gain speeds due to its reduced weight. The Brezza tips the scale at just 1,195kg which is almost 100kg lighter than its rival. The VGT aims at eliminating turbo lag, but there is no covering up for the lack of low end punch on the Brezza. In fact quite often you are even forced to down shift while overtaking. Rev the Brezza hard and it gets quite noisy inside the cabin too, something that can get annoying during long highway hauls. That said, the Brezza revs a lot more freely right up to its red line as opposed to the Nuvosport.

Powering the NuvoSport is the same 1.5-litre unit from the TUV300, but in this state of tune it makes 101PS and best-in-class 240Nm. The NuvoSport’s torque comes in as low as 1,600rpm which makes it feel a lot more eager at low revs than the Brezza and somewhat helps compensate its increased weight. However, once you climb up the revs, the NuvoSport feels a bit sluggish and the turbo lag becomes evident. Inside the cabin though, the NuvoSport is more silent than the Brezza.

Just like the Swift, the 5-speed manual transmission on the Vitara Brezza is slick and precise. The gearbox on the NuvoSport, whereas, feels rubbery and has long throws.

The NuvoSport is a lot taller than the Vitara Brezza and one has to really climb into it. Although the seating position in the NuvoSport is tall, visibility from the driver’s seat isn’t great. What’s more, it gets only two IR sensors at the back, which sometimes fail to detect obstacles towards the edges; making it that much difficult to park.

A softer suspension setup means it can absorb bumps with relative ease. The 215/65 section rubber on the NuvoSport plays its part in offering a good ride quality. However, over larger bumps and continuous undulations the NuvoSport ends up feeling boaty.

The Vitara Brezza, on the other hand, feels a lot car-like in its dimensions. Ingress, egress as well as visibility all around is a lot easier. The Brezza also comes with a reversing camera which makes it easy to park in tight spots.

Setup on the stiffer side, the Brezza doesn't quite ride as well over broken roads as opposed to the Nuvosport. On larger bumps though it doesn’t roll as much as the Nuvosport which makes it marginally better. Thereby the overall ride quality feels pretty consistent and it has better road manners too.

The Brezza here is for the enthusiast. Although the steering wheel is lighter than the NuvoSport, and we would have liked it if it was weighted slightly heavier, it is precise and more communicative nonetheless. The suspension is setup on the stiffer side that keeps the body roll in check. And the tyres offer ample grip. The Brezza feels a lot more stable and confident at higher speeds too. Brakes have impressive bite and stopping power as well.

In the handling department, the Nuvosport feels considerably better than its predecessor. Borrowed from the new Scorpio, the chassis is a lot stiffer than the previously used Bolero platform. However, the Nuvosport still can't match up with the Brezza. There is quite a bit of body roll due to which it doesn't inspire as much confidence. Its taller dimensions upset the centre of gravity as well. And then there isn't enough feedback on the steering wheel too. Brakes are more progressive and gradual as opposed to the Brezza.

At Rs 9.12 lakh for the top-end manual variant the Mahindra Nuvosport is marginally cheaper than the Vitara Brezza, which is priced at Rs 9.54 lakh. However, the latter more than makes it up in terms of efficiency. While the Brezza claims an impressive 24.3kmpl, the NuvoSport gets an ARAI rated efficiency of 17.5kmpl. Moreover, Maruti Suzuki’s service network in India is unrivalled.

Mahindra has done well to bring in Nuvosport at a time when the sub-4 metre SUV segment is booming like never before. It has two big aspects going for it – space and ride quality. While the improvements over its predecessor are easily evident, the Nuvosport still has a lot of rough edges and still falls behind the Brezza in terms of features, engine and handling. Maruti Suzuki is known for producing promising all-rounders, the Vitara Brezza here being a classic example. It scores well in almost every department and has a strong service network working in its favour, making it the compact SUV to pick in this comparison.