I'm the millennial Maruti execs made countless presentations upon. Does the Ignis make me want it? 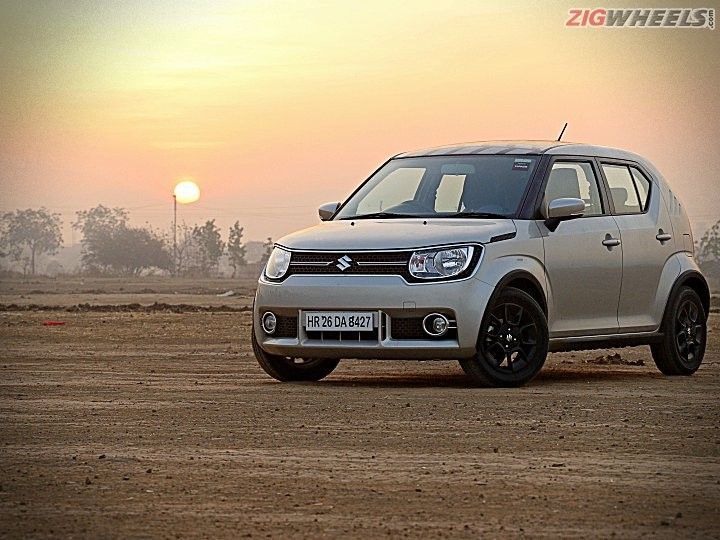 I believe the Ignis suffers from a serious case of FOMO. In case you had to Google that, Maruti wasn't thinking of you when it decided to put the hatchback on sale. I'll save you some trouble, it means fear of missing out. I get that sense because the Ignis wants to do everything. It wants to grab attention, be fun, practical, safe and efficient - all at the same time. Does it? Nay. Can it?

The Ignis' outfit of the day was a rather boring silver shade, paired with a snazzy roof wrap. I was pleasantly surprised when I glanced at it from my window. It's tall, wide and makes quite the first impression.

But, it isn't exactly what you'd call 'good looking'. Striking for sure, but calling it a pretty car is a bit far-fetched. It has the kei car theme going, so super short overhangs are paired with large 15-inch wheels and a tall roof height. The Ignis' quirk is courtesy the w-i-d-e C-pillar and the sharply raked windscreen. This draws quite a lot of polarising opinions - I like it!

I'm fond of the cutesy face too; the single-piece grille with the rounded headlamps bring a lot of character. The Zeta doesn't get the all-LED projector headlamps like the top-spec Alpha. Does that take away from the charm? A little bit. I reckon it could've done with a set of daytime running lamps if not the projectors.

I say follow me because you can practically walk inside the cabin of the Ignis. The front and rear doors open nice and wide, ingress and egress will barely be a concern. The large glasshouse makes the cabin super airy, and the bright white that envelopes the lower half of the dash and the doors adds to the sense of space. But, it is a tad too easy to get the white bits soiled. The chocolates, chips and cola will have to be consumed outside the car.

You can have as much as you want, though, because the Ignis is quite adept at accommodating healthy individuals. The front seats are nice and cushiony but have a hard headrest. The door pads are slightly flimsy too and do not have a usable elbow rest. Over to the rear, squeezing three in is possible, but not recommended. It should be fine for a quick run to grab a bite, but 5 aboard road trips are a strict no-no.

And, since this isn't the top-spec variant, there are three major things missing - automatic climate control, a touchscreen infotainment system and a height-adjust for the driver's seat. The first two make the dash look slightly awkward. The music player sits on a slab of plastic, and the dot matrix font on the screen isn't the most millennial thing around. The aircon chills the cabin down in no time. That said, I wish the switches were a tad better in terms of quality. They feel plasticky and do not look in place in a car that costs as much as the Ignis.

That's what the Ignis has in oodles. It isn't easily fazed by broken roads or potholes - the 180mm of ground clearance gives you the liberty to be slightly careless. But, there's an underlying stiffness to the way the Ignis rides, which comes to the fore when you hit the bigger potholes or the expansion joints on highways. It isn't as stiff as the Vitara Brezza, and manages to walk the tightrope between ride and handling nicely.

Speaking of which, I was pleasantly surprised when I chucked the Ignis into a long left-hander on the Mumbai-Pune Expressway. I remember praying when I went for the same corner at the same speed in a Mahindra KUV100, but this one simply obeyed. There's a hint of body roll, but nothing that's scary. The steering is nice and precise, not to mention just the right weight. Unlike Marutis of yore, it doesn't feel lifeless at highway speeds.

The ride, too, is relatively planted. Yes, it does feel floaty if you do speeds your parents asked you not to, but it doesn't cause you to be nervous. You can be rest assured a good stomp on the brake pedal will get you to a safe halt. Anti-lock brakes are standard across the range, but we did see a fair bit of squirming under hard braking while it came to a dead halt from 100kmph in 43.92 metres.

In spite of our test car being equipped with a convenience-spec automated manual transmission, the Ignis petrol is quite a hoot to drive. The 1.2-litre K-Series motor has a nice thrummy engine note, and you’ll enjoy revving it up to its 6,000rpm redline. Power delivery is linear, and the tug gets stronger as you move past the 2500rpm mark.

That’s also where the lag from the AMT stops bothering you, and lets you utilise all 90PS and 115Nm. Progress is brisk as it clocks 100kmph in 13.62 seconds. Slam the pedal down to the floor, and the gearbox doesn’t hesitate dropping a couple of gears if need be. The best bit is that it auto blips the motor to give you smoother (and quicker) roll-on acceleration. Upon kickdown, the 20-80kmph dash was dealt within a respectable 8.69 seconds. The gearbox holds the revs right up to the redline, and the shifts become a tad too noticeable as well.

If you really plan on giving it the beans, we’d recommend switching over to manual mode and momentarily taking your foot off the A-pedal during the upshifts. That practically negates the head nod associated with AMT gearboxes.

Thankfully, the shift shocks are minimal when you’re ambling about with a light right foot. The K-Series also sips with a pinched straw in this case – it returned 14.65kmpl inside the city and an impressive 21.89kmpl on the highway run.

At Rs 6.3 lakh (ex-showroom, Delhi), the Ignis isn’t exactly a bargain. While we do wish Maruti Suzuki retailed the AMT in the Alpha variant, the Zeta does cover all the essentials. The missing features such as the projector headlamps, the touchscreen or the automatic air-conditioning, for that matter, aren’t deal breakers. Compare it to the automatic variants of the Honda Brio and the Hyundai Grand i10 (which are priced similarly) and the Maruti has an upper hand in safety since dual airbags, anti-lock brakes and ISOFIX child seat mounts are standard.

So, does the Ignis make me want it? The answer to that, is yes. It is a fairly well-balanced package for something that targets a niche. It is just as friendly, easy to drive and easy on the wallet as any other Maruti hatchback on sale, with an added dose of flair.