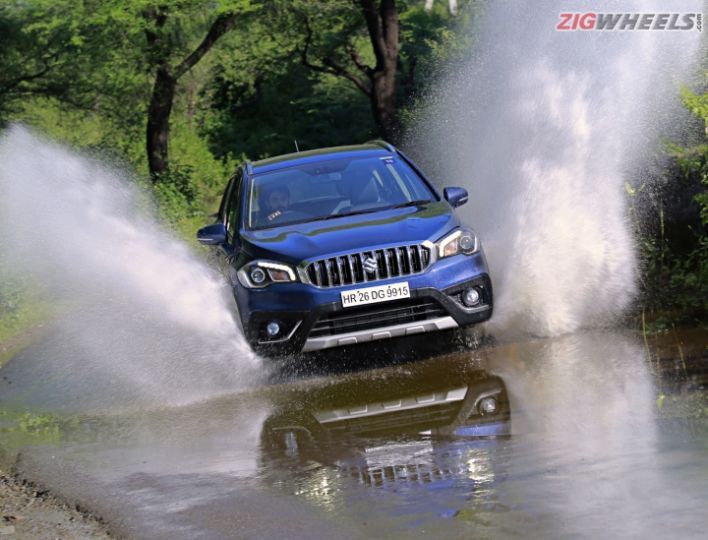 In a country that drools over tall and boxy SUVs, a crossover gets as much attention as the background dancers in a Bollywood movie. Naturally, the S-Cross felt a bit lost among the Dusters and Cretas. Making the S-Cross click with the masses was always going to be an uphill task.

Now, most of that was down to the way it looked. It never said “Hey, look at me!”, did it? Can a midlife facelift bring the S-Cross front and centre?

The droopy face of the outgoing generation wasn’t something you’d like instantly. It grew on a few of us at the ZigWheels office over time. The updated version follows a similar mantra. The big difference is that while it looked docile earlier, it now looks like it’s been promised cake and served broccoli.

Now when the face turns up in your rearview mirror you’re more likely to give it a second glance. In the metal, and plastic, the changes are focussed around here. From the bumper, the quarter panels, the hood and the lamps everything has been redesigned to give the S-Cross a more “upright” SUV-like look. It starts with the new grille which is wider and higher-set.  Spotting it will be easier because all that chrome on the grille is really hard to miss!

The headlamps have been reworked as well. They now get a smoked finish, and powering the projectors are LEDs. We’ve seen LED headlamps work their magic in the Dzire and the Ignis, and these ones are no different. The beam is concentrated and the throw is long too. Not to mention, it makes those driving ahead think a bigger, more expensive and possibly German car is in tow.

To accommodate the kink in the headlamp, the bumper gets an update as well. The creases are subdued no more, and that really makes the front end pop. Finally, the bonnet has had a shot of testosterone to supplement the angry face. The two crisp pleats on the hood do just enough to go along with the other updated elements.

Updates to the side profile might just go unnoticed. But they do lend the S-Cross a fresh flavour. We’re glad the alloys don’t look like wheel caps anymore. The 16-inch alloy wheels now get a simpler design and a two-tone finish. It’s also shod with larger 215/60 rubber which makes the car looks ever so slightly raised. If you dig into the numbers, you’ll find that the updated S-Cross is 5mm taller and 20mm wider.

Coming to the rear, you’ll notice a change only if you spot the Alpha variant. The LED taillamps (along with the projector headlamps) are available only on the top trim. If you’re keen-eyed you will also spot the tiny ‘SmartHybrid’ badge.

While changes on the outside are immediately noticeable, the updates on the inside require you to be a Suzuki nerd. We’ll save you the hassle: there’s only one difference in here.

The middle portion of the dash doesn’t feature the criss-cross texture anymore; it gets a smooth rubbery texture instead. And yes, it’s soft to touch. Everything else, from the layout, the materials used and the equipment list remains identical to the outgoing version.

Speaking of which, you do get quite a loaded car for the money. The basics of a height-adjustable seat, tilt-telescopic adjust for the steering, front and rear armrests are in place. The feel-good section of the feature list includes automatic climate control, rain-sensing wipers, and automatic headlamps with auto levelling.

Sitting in the middle of the dash is the now common 7.0-inch SmartPlay infotainment system. It gets a small update in the form of Android Auto, which works without a hiccup. The screen also doubles up as the display for the rear parking camera, but the guidelines are static. That’s a small but annoying miss.

Since we’re talking misses, Maruti could’ve gone no holds barred with features for the facelift. This would’ve let the S-Cross leapfrog its rivals. For instance, rear air-conditioning or a sunroof would’ve gone a long way in cementing its premium positioning. What’s also missing are those little details that make the experience rich. It can be something as simple as backlit power window switches or ambient lighting. They’re not absolutely necessary or even dealbreakers for that matter, but, for the price, they’re definitely good to have. Of course, this would’ve added to the cost. Once bitten, twice shy?

This aside, the cabin of the S-Cross is a good place to be in. Maruti hasn’t fiddled around with the seating at all. The leather-upholstered seats offer good support, and there’s nothing to complain about in terms of comfort. It continues to be a proper 5-seater with generous amount of knee, shoulder and headroom for the rear occupants. Like before, the rear seat reclines, so you can choose between a relaxed and a slightly upright position. The boot’s not so generous 353-litre capacity is unchanged, and the rear seats get a 60:40 split. Fold the rear bench away and you have access to 810 litres of space.

Okay, there’s one more change to the interior of the S-Cross. The instrument cluster gets an SHVS light, and ‘Smart Hybrid’ stamped on the speedo. This small detail points towards the bigger change under the hood.

Open the bonnet and you’ll find Maruti’s bread-and-butter 1.3-litre diesel engine thrumming away. It continues to make 90PS of power and 200Nm of torque. But it’s now paired with an integrated starter generator, or ISG as Maruti likes to call it. This in conjunction with the bigger battery forms a mild hybrid system. This, Maruti claims, bumps up fuel-efficiency by 7 per cent (25.1kmpl vs 23.65kmpl) and cuts back on CO2 emissions by 10 per cent (105.5gms/km vs 115gms/km). It’s also heavier by a full 35kgs, and that’s down to the bigger battery, the ISG and the associated belts and pulleys.

More importantly, it’s the torque assist that makes a small difference. The S-Cross doesn’t feel as bogged down by turbo lag as before. Even when the turbo isn’t spooling it feels easy to drive. Inside the city this will be a blessing. It’s comfortable doing 20kmph in third without protesting. This means you won’t be fidgeting with the gear lever too often at low speeds.

On the flipside, you’ll have to really work them to get anywhere in a hurry. Simply put, look elsewhere if you’re looking to have fun. While it pulls cleanly when you put the foot down, it takes its own sweet time to gather pace. The 1.3-litre motor is clearly stretched to the max to hustle this 1200kg+ machine.  What’s appreciable is the fact that the motor doesn’t break into a sweat maintaining triple digits on the speedo. What’s not is, you’ll have to downshift and rev the guts off the engine if you need that quick burst of power for an overtake. With a full passenger load, around the ghats - we reckon it’d struggle to be quick-footed.

We rubbed our eyes in disbelief a few times at how collected the S-Cross was through the rough stuff. The ride quality was always a highlight. But, dare we say, it’s become even better. There’s no other way of saying it: the ride quality is epic. It isn’t bothered by anything, and it keeps the thuds and jolts out of the cabin. It does have a stiff edge when you hit a nasty pothole at really high speeds. But the cabin remains calm and composed. Even on the highway it’s as relaxed as a Euro car. And that’s saying something! The suspension was tweaked a bit to accommodate the new and bigger tyres. The older 205-section JK Elanzos have been replaced by 215-section UX Royales. We couldn’t push it enough to find out if it offered any more grip. But the bigger highlight is that these don’t squeal and protest as much when you chuck it hard. And they aren’t as noisy either.

Also, the steering does an admirable job of telling you what the wheels are upto. The weight feels just right, and at highway speeds - it doesn’t feel all that vague either. This isn’t a car you go corner hunting with. Once you set that expectation straight, you will be pleased with what the steering has to offer.

Disc brakes all around make sure braking is fuss-free. The brake bites in early, and the pedal has a predictable progressive feel. Anti-lock brakes with EBD are standard across the range, and so are dual airbags.

Absolutely! Is it significantly different? The answer to that, quite simply, is no. The big disappointment is of course the absence of that fun-to-drive 1.6-litre engine. That motor felt at home on the highways, and this 1.3 just about does the job in comparison. But, that aside, the S-Cross' strengths remain. The ride quality is fantastic, it's spacious for a family of five, and the build quality is easily among the best we've seen from Maruti.

If the S-Cross wasn't on your radar, it now deserves a spot on your buying list. It’s unlikely that the update will change Maruti’s fortunes in the SUV space overnight, but it’s definitely a lot more appealing. Considering the package, it looks like it's a worthy alternative even if you were eyeing a sub 4-metre SUV like the Vitara Brezza or a cross hatch like the Active i20. The background dancer has the right moves to grab some of the limelight now.