Kia’s Rio X-Line, a ruggedised Hyundai i20 rival, gives us a taste of things to come from Kia 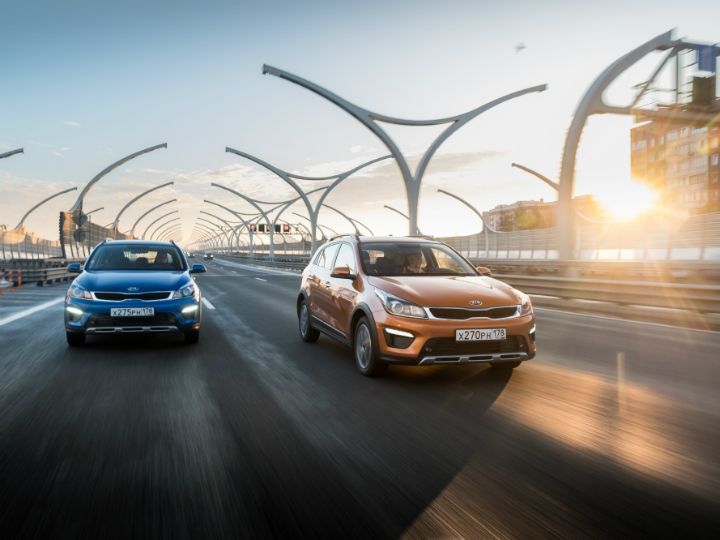 With almost its entire lineup of cars and a made-for-India concept, the Concept SP, in tow, Kia arrived in India with a bang. The youthful-looking cars and the promise of one quality standard across the world, including India, makes the first Kia seem even more tempting. But the wait for the first Kia, the production version of the Hyundai Creta-rivaling SP Concept, stretches till September 2019.

And, when the first Kia rolls into showrooms, what should buyers expect? Along the sidelines of the World Cup semi-finals in Moscow, we got a taste of the Rio X-Line to get a better understanding of brand Kia.

Right, it does. From the front you’d be hard pressed to think of the X-Line as a hatch. It has the fullness of design of a sedan. The headlamps internals don’t look particularly striking but the way they stretch backwards make it stand out from the Rio. The tiger nose grille is prominent as ever and the faux skid plates in silver do stand out and give it that added ruggedness.

Even when you view it from the side the X-Line impresses. The light plastic cladding for the wheel arches, doors and door sills looks discreet and appropriate for scuffs experienced in the urban jungle, not the Taiga. Also, in Europe, the X-Line rides 170mm off the ground, which is lower than the Active’s 190mm. Notably, the Rio and X-Line have a more low-slung stance than the Hyundais and this can be seen in the way the roof line rolls prominently towards the rear. However, the roof-rails give the X-Line a few crucial inches, but at 1510mm it is only 5mm taller than the i20.

Also, the boot is more prominent and the sharply cut tail lamps that stretch across it pronounce its generous proportions.

Kias are quite restrained in terms of their colours inside the cabin. Darker colours dominate, for the plastics and fabrics. The design focuses on getting the basics right rather than throwing in wow elements. The texture of plastics is handsome while the buttons and switches feel solid. Touchpoints like the leather for the gear lever and the steering wheel felt pleasing too.

The steering wheel is the most striking part thanks to the round horn pad and the instrument cluster that sits beyond it has two handsome analogue dials with a MID in between them. The layout of the dash is smart with slim aircon vents in the centre, a 7” infotainment screen and easy to use aircon controls housed under it. It doesn’t lack on practicality on other fronts either -- the door packets are well designed.

On the safety front the X-Line gets dual airbags, ABS, ESC, hill start assist, and even an emergency button to alert first responders in case of an accident, as standard.

Stepping into the rear means dropping down onto the seats as the roofline is low and the seats are set low too. As a result thigh support is not too good as the seats are set a bit low, and the glass area is a bit tight too. However, there is ample knee room so that even taller occupants won't complain about space. Our test car didn’t feature a centre armrest or air-con vents, absolute must-haves for India. Time spent inside the cabin makes it clear that the X-Line could do duty as a sedan quite easily.

Far from it. Covering distance calmly in the X-Line felt natural and relaxing. Sprightly? Very much. The X-Line we drove came with the familiar 1.6-litre petrol engine with 123 PS of power that sent power to the front wheels via a six-speed gearbox. On Russian motorways, running near the 100kph mark the performance felt adequate for cruising or overtaking, the gearbox shifting smoothly and promptly on most occasions. While there were no paddle shifters, the gear lever could be used for manual control.
Pressed hard there is a bit more performance to be squeezed out for emergencies.

The steering gave you a sense of connection that made the drive relaxing and the suspension offered a good deal of composure too. But, a sense of comfort and calm grows on you as you spend time in the front seats. This is down to the low and flat dashboard design which gives you an excellent view of the road ahead and makes the cabin feel a lot airier.

Yes, indeed. Kia is exploring the larger than 4-metre hatchback concept for India and the Rio X-Line seems like a very sensible pick. By retuning the suspension to suit our roads the X-Line could make for a very appealing, spacious yet practical hatchback that could be a solid alternative to compact sedans or compact SUVs too. But, you will have to be patient as Kia’s hatch, the Rio, or the cross-hatch, the X-Line, won’t make it to India before 2020. But, we now know what to expect from Kia and look forward a bit more keenly to their first offering in September 2019.