The Honda Navi has come in as a trendy option for the youngsters buying their first two-wheelers. But, at a similar price, where does it stand against the established scooters like the Honda Activa? 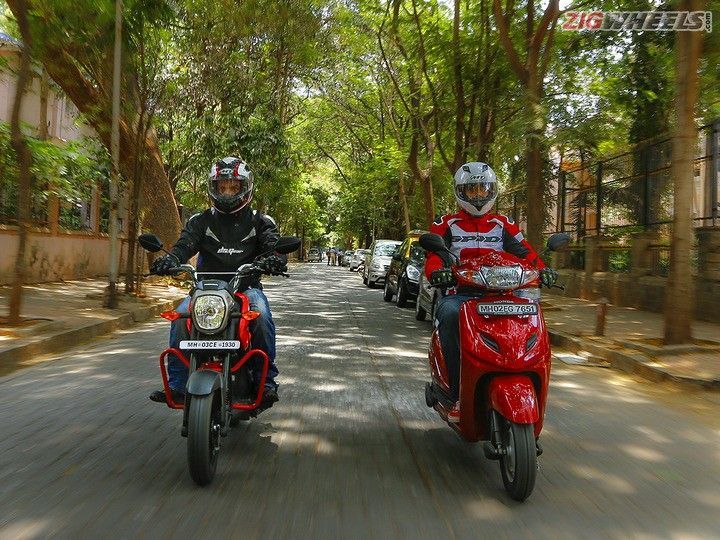 We’ve all had that dining table discussion with our parents at the time of buying the first two-wheeler. Fearing for our safety, they would always want us to start off with something safe, conservative and economical (read as underpowered, old-fashioned and extremely fuel efficient).

On the other hand, the adolescent in us refuses to give up on style. It’s something your personality is associated with as you hang out with your friends or take your girlfriend out on an early morning ride. But it’s your parents who’re ultimately going to bear the expenses for your first ride and thus a consensus needs to be reached between the two parties.

If you’re among the fortunate ones, you’ll be allowed to buy a bike with ample number of horses. But for most, like me, it usually boils down between a 100cc-110cc commuter and a scooter. We’ve grown up watching our fathers riding the former to and from office every day, and the closest cry from our dream ride thus ends up to be the latter, invariably.

Don’t believe me? Check out the parking lot of any college/tuitions and the number of Honda Activas, and its likes, stationed there would speak for themselves.

However, 2016 has brought about a sort of a paradigm shift in this playground with the Honda Navi! While speaking to one of Honda’s dealers, I was informed that the Indian government does not recognise a third division, apart from scooters and motorcycles, for two-wheelers yet. And the Honda Navi is here to do just that – break the clichés and set up an entirely new segment of two-wheelers; not only for the youth but also for the young-at-heart.

Now the question is that, at a rather similar pricing, where does the Navi stand against its already established rival – the Indian scooter? We took it out for a head-to-head against the face of gearless two-wheelers in India, the Honda Activa 3G, to answer that question.

I got the opportunity to pick up the Navi for the first time from a colleague’s place in Mumbai’s Dadar neighbourhood. The 20-odd km-long ride from there to the Andheri suburb turned more heads than my beard could ever do, even on its most glorious days. So much so that you want to mount a GoPro on your helmet and just record the priceless reactions of people being taken aback by something so uncannily pretty on the roads.

It’s been 10 days since, and the Navi’s charm ceases to fade; fetching eyeballs from even the prettiest of women. Apart from the cute little proportions, the all-new hexagonal lamp, the dash of colour on single-piece tank and side panels and the gaping hole in place of the engine under the tank, all play their part in the Navi’s uniqueness.

The wheels, forks, engine and exhaust are coloured in contrasting black hues while the tail lamp, borrowed from the Stunner 125, blends in seamlessly, to one’s surprise.

Against this inexplicably gorgeous machine, the Activa sort of disappears in the crowd. Nonetheless, it’s something that is aimed at a larger audience and most moms and sisters would prefer it over the Navi any day for its dynamic design, conventional scooter-like sitting position, premium headlights integrated into the handle bar unit, 3D chrome badging and informative instrument cluster; all of this on a sturdy metallic body.

In terms of features, the Honda Navi combines the best of both worlds. For instance, the fuel tank is positioned conventionally between your legs, just like a bike, and the accompanying fuel inlet does not even require you to get off it while refuelling. A fuel gauge though is missed on the rather simple console, but an old-school reserve fuel knob on the Navi comes in as a breather. For some riders, Navi's two key-holes -- one for locking the saddle and one for ignition, might be confusing intially.

The bummers include no pass light button on an average switch gear, the absence of a kill switch and alloys, all of which would definitely have made the Navi more cool. Myriad customisation options (to be offered soon) though will give you the chance to experiment further with the looks of the mini bike.

The Activa, on the other hand comes with a comparable, if not higher, set of features, including the monoshock rear suspension and tubeless tyres. Where the Activa just edges out its rival cousin is a relatively cavernous storage space with an underseat compartment that’s good for a half-face helmet, adjacent hooks and (like the Navi) an optional storage box. The combi-brake system also is a major plus for the Activa when it comes to safety.

At 101 kg, the Navi weighs a full seven kilos lesser than the Activa. Combine this with the sleeker design of the Navi and that would explain why it takes off from dead halt quicker than the latter (despite the same 109.2cc 4-cylinder air-cooled engine that is good for 8.1PS and 8.8Nm on both bikes). Beyond speeds of 60-65kmph though, the Navi’s engine starts sounding gruff and the vibrations can be felt through the seat.

Elsewhere, the handling is great, and thanks to 12-inch front wheels, the Navi lets you twist and turn at ease in Mumbai-like traffic conditions. With telescopic forks on the front, the ride quality feels extremely supple. Some of our colleagues would not even blink an eye to stand straight on the Navi’s footpegs and jump it into deep potholes. The drum brakes are good enough to decelerate from flying speeds, though a combi-brake system could have been employed.

As for the Activa, the ride feels a little stiffer once you’ve been on the Navi; largely due to its old-school trailing link front suspension setup. Braking performance on the Activa is much better as the scooter sheds speed effortlessly while the combi-braking system watches your back if you do get into sticky situations. Overall, it remains to be one of the best scooters around.

It would only be fair to judge the Hondas on everyday practicality after putting them through a string of tasks that we face in our day-to-day lives. So when in possession of the two-wheelers, we did just that – identified certain ‘daily challenges’, and executed them on Mumbai’s busy streets.

• The Navi features a longer seat than the Activa, which has a wider cushion under your backside. So, we picked up the ‘biggest’ members of our team, and rode pillion with them to find out what is more comfortable among the two. While the position of your buttocks is similar in both instances, the rear footpegs on the Navi are rather closely positioned to the front ones. As a result, the pillion’s shoes are constantly kicking the rider. However, on a first date, the closer the better. No?

• Next, it was time to refuel and it gave us the opportunity to find out how easily the Navi can be fed and fled on. You can remain seated on it, simply twist the key of the fuel tank lid, fill it up and take off. On the other hand, the Activa takes at least half a minute more by demanding you to get off it, lift the seat, open the underseat fuel tank lid and then go about your business. Too less scope on this one if you’re running late for a college lecture.

• With tanks full, we then took both the Hondas out for long-ish rides to find out whether the Navi undercuts the Activa on fuel efficiency. On both highway and city riding conditions, the Navi actually emerged victorious by returning 62km for a litre while the Activa burned a litre of petrol for 56km. The disadvantage with the Navi however is its tinier 3.8-litre fuel tank, which would run for far less than the Activa’s 5.3-litre reservoir. It means more visits to the bunk with the Navi.

• Finally, it was time for shopping. Grocery shopping, I mean. At the end of ticking off items from a lengthy list that moms toss, you are usually overflowing with items from the shopping bag. The Activa has a hook adjacent to the footboard that allows you to station at least a couple of small bags. The bigger ones can be put away under the seat. However, with the Navi, there is a hardly any room for tidying away, even with the optional storage box. Don’t tell your mom about this shortcoming if you’re planning to buy a Navi.

Both the two-wheelers are meant for city commutes and efficiently covering people’s daily riding requirements. The Navi however will be more suited for a youngster looking to buy his first two-wheeler along with keeping the style quotient up. Either if you’re getting late for that early morning college lecture or a date with your first crush in college, the Navi will have you covered.

The Navi is also an agile navigator through tough traffic and would also be a handy ride for even young-at-heart middle-aged men. For instance, there was a Navi parked outside a Honda dealership. Upon enquiring, the manager informed me that the 40-something owner of the dealership was himself the owner of that mule. How’s that?

But someone like my mom would definitely not prefer riding a Navi for her daily trips and that’s where it’s restricted. The Activa comes into the picture here as a complete family two-wheeler. Everyone, from the grandparents to the adolescent grandchildren, can jump on its saddle. Just that it won’t set a youngster apart from the rest of the crowd on the first day of college.

Here’s where things get interesting. Both the products come from the stables of the second largest two-wheeler manufacturer in India, so the widespread dealership network and prompt after-sales service should be at par.

Talking money, the Activa is priced at Rs 53,716 while the Navi carries a sticker price of Rs 42,824 (both prices ex-showroom, Mumbai). The heart would rate the Navi higher, on the back of better acceleration, agile characteristics in traffic and the funky styling. What makes its case even stronger is the fact that it is cheaper by almost Rs 11,000; a sum for which a student can get hold of something like a decent smartphone.

But what the Navi lacks is the practicality of the Activa in terms of storage space. The Activa is also among the best reselling two-wheelers in the country, something that remains unanswered with the Navi, as it will have a restricted audience.

As a young college goer, many would be tempted to buy the Navi ahead of the Activa. But will it equally impress the gentleman who is going to sign the cheque for it? Go ahead and try!