Harley-Davidson India expanded its Sportster family by launching the new 1200 Custom. We took the new cruiser motorcycle for a quick spin around Jaisalmer and here’s our first impression of the new motorcycle 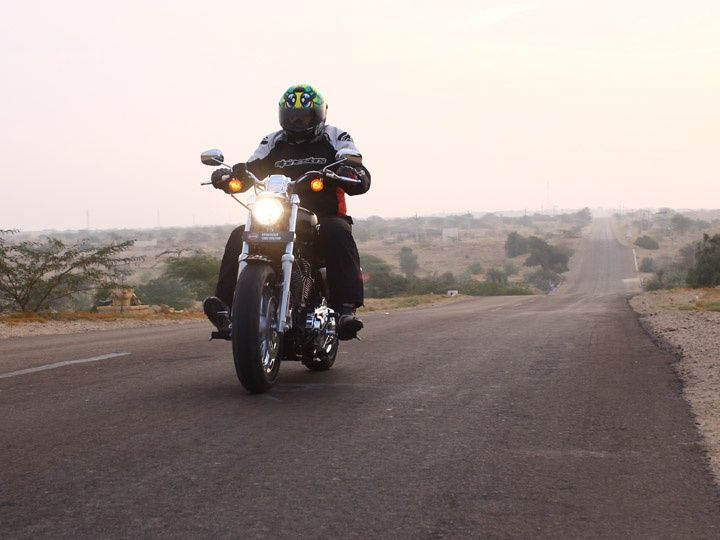 Harley-Davidson has been on an interesting journey in the Indian market. They were among the first of the premium motorcycle manufacturers to set shop in India (2010 to be precise). At that time there was lot scepticism in whether the American bikemaker did the correct thing by establishing themselves in India as demand for performance motorcycles was very low. They stepped in via the CBU route after the “mango diplomacy” didn’t bear much fruit. But sales of its motorcycles were rather fruitful. Given the demand, soon it started to assemble bikes in India which reduced the pricing substantially. But the most important move made by Harley-Davidson India was in 2014 when it decided to manufacture the Street 750 in India.

It not only allowed it to breach the sub Rs 4.5 lakh barrier but also made the iconic brand more approachable for hordes of bikers across the country. But 2015 was a rather quite year for Harley-Davidson India as apart from updates and facelifts no new offering have made their way onto our tarmac. Gladly though, 2016 on the other hand is off to a stonking start for Harley-Davidson as it launched the new Sportster 1200 Custom in India. The new motorcycle is a basically a replacement and as well as an upgrade for the Harley-Davidson Superlow that was recently discontinued and priced at Rs 6.232 lakh ex-showroom Delhi.

One look at the new motorcycle and you can identify that it is a Harley-Davidson offering with its classic cruiser styling. The round headlamp, large fuel tank and the generous looking saddle are all quintessential Harley design elements. Also there is no dearth of chrome on the motorcycle and the extra bling hikes its visual appeal further. We particularly liked the cast aluminium alloy wheel design which is reminiscent of the classic Fuchs wheels found on Porsches. The floating instrument cluster looks interesting with a large analogue speedometer and a small digital readout for tachometer, gear position indicator, trip meter, odometer, clock and distance to empty. Switch gear quality is top notch while the overall fit and finish quality is satisfactory.

Swing a leg over the bike and you are surprised by its petite dimension. In no way is the Harley-Davidson Sportster 1200 Custom a diminutive bike but it also doesn’t intimidate riders like other larger cruiser bikes normally do. The mildly raised handle bar, low saddle and the front-set foot pegs result in a very relaxed riding posture. I couldn’t really ride the motorcycle for a long duration as it was a short stint but the comfort factor of the Sportster 1200 Custom is high and it should be a great motorcycle to chug down the miles on the highway. Below the tank sits the chrome drenched familiar looking 1,200cc Evolution V-twin motor as seen on the Harley-Davidson Forty-Eight. Harley hasn’t divulged power figures but rather has focused its attention on the 96Nm of peak torque made available at 3,500rpm. Push the starter button and the air-cooled engine comes to life with a rumble emitting a distinctive Harley exhaust note. Open the throttle and the rush of torque pushes you off the line gently before getting more potent as the mid-range approaches.

Triple digit speeds arrive rather effortlessly and the motor feels joyous pottering at speeds around 100-120kmph in fifth gear. Given the fact that we were riding the Harley-Davidson Sportster 1200 Custom on rather narrow roads we didn’t push it to the limit. But the fact that it was composed at speeds around 120kmph gives us a fare idea about its high-speed dynamics. Vibrations are though part of the parcel but it doesn’t get to irritating levels though we would have preferred more refinement. The 5-speed gearbox which transmits power to the rear-wheel via belt drive slots into place with a loud clunk and isn’t the best set of transmission on sale. Talking about ride quality, the bike is setup on the stiffer side but it did absorb the minor bumps rather well. The low ground clearance (105mm) would be a concern on speedbrakers and it should have been raised for the Indian market. Although the bike weighs in a hefty 268kg, once in motion it does manage to mask its weight rather well.

Parking the bike isn’t cumbersome like many other high capacity cruiser motorcycles. We couldn’t ride the motorcycle on corners but it does show potential of being an enthusiastic machine around twisties. The Harley-Davidson Custom 1200 felt quick on its feet which is a trait very few Harley motorcycles can boast of and taking u-turn was effortless. The agile nature should make the Sportster 1200 Custom easy to ride in city traffic as well. Providing anchorage is disc brake on both the ends. Braking performance is good with nice bite and progression but ABS has been given a miss. We feel with the performance on offer and at this price point ABS should have been made standard which according to Harley-Davidson officials is in the pipeline.

The Harley-Davidson Sportster 1200 Custom has been priced at Rs 8.90 lakh ex-showroom Delhi. At this price point it is among the cheapest cruiser motorcycles on sale currently and undercuts the Forty-Eight by Rs 50,000. Talking about competition, its nearest rival is the Indian Scout which carries a sticker price of Rs 12 lakh. The bike will be offered only in a single clour shade which is disappointing but there will be tonnes of optional aftermarket extras.  The classic Harley-Davidson styling should appeal to a large set of buyers while the comfortable riding dynamics further adds to its repertoire. Furthermore its agile nature and compact dimensions makes the Harley-Davidson Sportster 1200 Custom a fun motorcycle to ride which is among the most important factors in a bike. So if you’re in the market looking for an easy to ride and comfortable cruiser motorcycle, we would strongly recommend you to check out the Sportster 1200 Custom before finalising your purchase.