We ride Harley’s newest Sportsters in the hills of Croatia 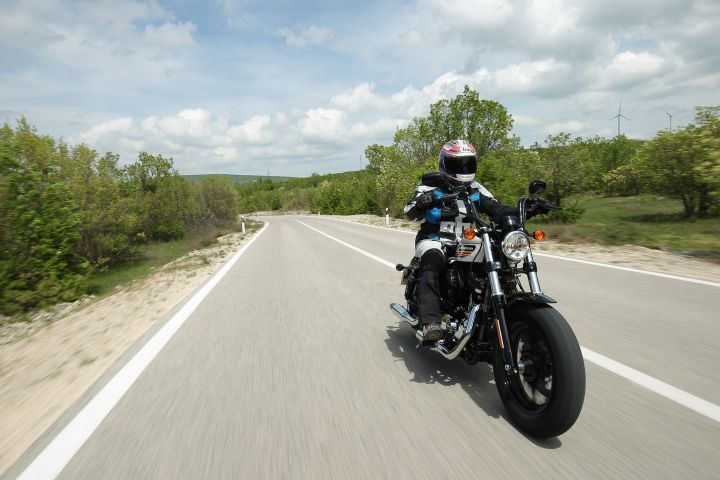 Barring the Street 750 and the Street Rod, the Iron 883 and the Forty Eight have been two of Harley-Davidson India’s best selling motorcycles. The lazy V-twin character in a smaller, more manageable and affordable package has made it a favourite for first-time Harley owners. The Forty Eight with its more aggressive stance offered a more bad-boy attitude. Harley took these two models a step ahead when they showed the larger Iron 1200 and Forty Eight to the world. And now we are in sunny Croatia to find out what these two new Sportsters are all about.

While the Iron 883 and Forty Eight look aces, Harley-Davidson has somehow managed to make the Iron 1200 and Forty Eight Special look even more special. They have gone the retro way with the two, specifically the 70’s era. Your attention is immediately drawn to the fuel tank as the rest of the two bikes are swathed in black. The simple but classy colours for the tank are complemented by horizontal stripes..

The Iron 1200 strikes a more sporty look thanks to the slimmer front wheel and the speed screen. It is a surround for the headlamp, a 70’s touch, also seen on the Street 750. Other retro influences are seen on the new ape hanger handlebars that is wider and higher than the one seen on the Iron 883. They offer a more relaxed riding position and allow more leverage when turning in. There is also a new fastback cafe seat that gets a more pronounced bump at the back to keep you from sliding back every time you accelerate. It works as advertised but does eat a bit into the seat space. Color options include Vivid Black, Twisted Cherry and Billiard White.

The Forty Eight Special continues to use a balloon front tyre for a more meaty look. However, instead of the low-set ‘bars it also uses ape hangers. These are slightly shorter ‘tallboy’ handlebars and are set forward for a more aggressive riding stance to go with the bike’s character. Rest of the bike remains unchanged.

Other than these changes, both bikes carry forward the same design and features as the smaller Iron 883 and Forty Eight. They do get keyless ignition as an optional extra.

Interestingly, Harley-Davidson has been offering a 1200cc engine bore kit for existing Iron 883 and Forty Eight owners for a while now.

With the 1202cc motor Harley promises 36 per cent more torque. It makes 96Nm as compared to 68Nm on the Iron 883. The new motor essentially is a bored out version of the 883 air-cooled Evolution V-twin. Engine bore has increased while stroke remains the same. The bike, despite having a larger capacity and more performance, weighs just one kilo more than the Iron 883. It’s the same case with the Forty Eight and Forty Eight Special.

Compression is also up and it shows in the way the motor revs freely. It picks up revs quickly and the torque surge is way stronger than the 883. This is a long stroke motor with a lower rev ceiling and plenty of torque from idling revs, so you don’t have to rev much to get going even in a hurry. But at city speeds you will tend to stick to the lower gears as the ratios are a bit tall. The upside is that you can stick to one gear and simply treat the motor as an automatic.

During our 160 kilometre ride we spent most of our time in third gear, where the motor was flexible enough to allow us to go from 30 all the way to 120kmph in third gear. It was only in the city that we had to drop down to 2nd gear, and, on rare occasions, to first gear.

Vibrations are well contained, creeping up around 2000 to 2500rpm and higher up around 4000rpm. It does have the characteristic vibrations that Harley-Davidson owners and enthusiasts the world over rave about. It will tire you after a while but then these Sportsters were never long-distance tourers, rather something you hopped on for a quick Sunday ride.

Both bikes feature the same chassis, suspension setup and tyres as the smaller Iron and Forty Eight. They remain unchanged as the new motor does not substantially increase weight or require any alterations to the frame. The result is the feeling of riding a more powerful Iron 883 and Forty Eight.

The Iron 1200 offers a more aggressive riding stance with its mid foot controls. It is quick to turn into corners but at high speeds you do wish it felt a bit more planted. The rear twin shock absorbers too are easily unsettled by mid-corner bumps. The 19-inch front and 16-inch rear Michelin Scorcher tyres offered fantastic grip, allowing us to push the bike around. Which brings us to the next issue: cornering clearance.

We felt that the bike had a lot to offer in terms of cornering on smooth roads but were limited by the low-set foot pegs and exhaust. In fact we ended up grinding the foot pegs and scraping the exhaust underside to the extent that one off the feeler bolts on the footpegs came right off.

The Forty Eight feels more planted. It has a heavier front end, a combination of fatter forks, a fatter 16-inch front tyre and shorter handlebars which requires more effort to turn. The plus side is that the forks get a brace above the front mudguard while the fatter front tyre offers a larger contact patch, which means more grip. The Forty Eight was unfazed by mild mid-corner bumps, and with slightly higher forward-set foot pegs, allowed for more cornering clearance. All this added up to offer a more enjoyable ride experience than the Iron 1200.

While both bikes had strong brakes, they did not feel as reassuring as the ones on the larger and heavier Road King we rode the day before. They however have good bite, enough to get the job done. ABS is an optional accessory but should be standard fitment when launched here.

When are they coming?

Harley-Davidson is in the process of finalising the bikes for its India lineup. There is a high possibility that only one of these (probably the Forty Eight) might come here as pricing these bikes right will be a tricky affair. The Iron 883 costs Rs 8.82 lakh (ex-Delhi) while the Forty Eight costs Rs 10.5 lakh. If Harley plans to launch both these bikes here, we expect them to cost close to a lakh more.

That would mean a price tag of close to Rs 10 lakh for the Iron 1200 and Rs 11.5 lakh for the Forty Eight Special. The pricing would eat into the sales of the 1200 Custom (Rs 10.65 lakh) and the recently launched Roadster (Rs 10.09 lakh) That would get the prices dangerously close to the new Softail range which starts from Rs 12.6 lakh. We expect the bikes to be launched by the end of this year.