The Japanese, the French, and the Indian hatchbacks compared on paper 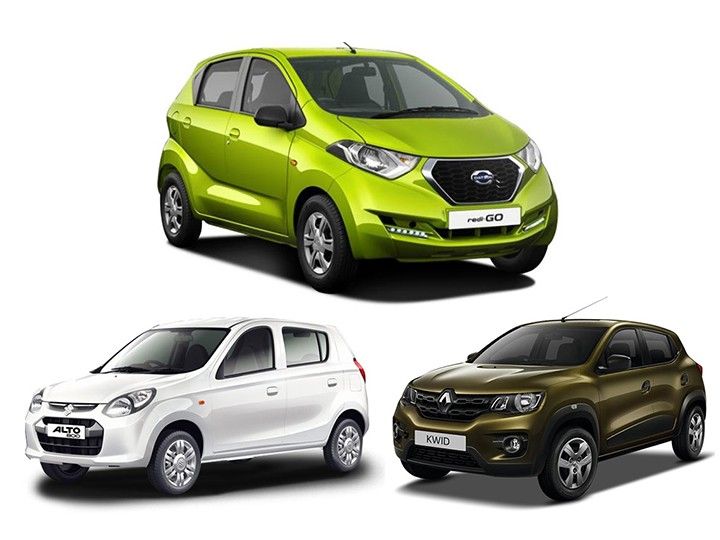 An entry-level hatchback will mostly be a first car for most car buyers, and buying your first car is no easy decision. To help you clear your doubts, we have compared Datsun’s all-new offering in the entry level hatchback segment with the Renault Kwid and the best-selling car in India, the Maruti Alto 800.

The Renault Kwid and Datsun redi-GO are based on the same CMF-A platform but have slightly different dimensions. The redi-Go has a tall-boy design whereas the Kwid, with its square wheel arches, looks more like a pseudo-crossover. On the other hand, the Maruti Alto has a conventional small hatchback design. Maruti has recently updated the same and it now comes with a redesigned front grille, refreshed headlamps, and is available in two new bright shades.

Talking about dimensions, the Kwid is 3,679mm long and 1,579mm wide which make it the longest and widest car in this comparison.  The Maruti Alto is the most compact hatchback with 3430mm of length, 1490mm width, and height of 1475mm. The redi-GO, due to its tall boy design, is the tallest with a height of 1541mm.

To carry your luggage, the Renault Kwid has a great boot space of 300 liters which is significantly more than the redi-GO (222 liters) and the Alto (177 liters).

The Renault Kwid and Datsun redi-GO use the same 799cc three-cylinder petrol engine. It produces 54PS of power along with 72Nm of torque. However, the redi-GO is lighter than the Kwid and Datsun claims that it can do 0-100kmph in 15.98 seconds which makes it the fastest car in this comparison.

India’s most sold car, the Alto uses Maruti’s tried and tested 796cc three-cylinder petrol engine which produces 47PS of power along with 69Nm of power. Every mechanic throughout the country is familiar with this engine, and widespread Maruti dealership network and easy availability of spare parts are the Alto’s strong points over its competitors.

Taking care of the transmission duties in all the three cars are 5-speed manual gearboxes. Renault also showcased a 1-litre AMT variant of the Kwid at the Indian Auto Expo in February. We can expect it to be launched by the upcoming festive season and it will compete with the Alto K10 which comes with a 1-litre petrol unit with an optional AMT gearbox as well.

While you cannot really expect a lot of features from entry-level hatchbacks, the Renault Kwid comes with a 7-inch touchscreen infotainment system with integrated navigation which supports Bluetooth, AUX and USB connectivity. On the other hand, the Datsun and the Maruti come with a simple music system which supports USB and AUX connectivity.

Sadly, this section of this comparison isn’t going to be very long. The maximum safety kit available on all the three cars is just an optional single driver-side airbag. None of the cars have ABS as well. The Renault Kwid scored a zero star rating in the recent Global NCAP crash test. Read more about it here. The Datsun redi-GO with dual airbags has scored one star in the Global NCAP crash test, under the #SaferCarsForIndia initiative.

The “Kitna deti hai?” question plays a very important role in this segment as most of buyers would be first-time car owners operating on a budget. The Renault Kwid and redi-GO have an identical fuel efficiency figure of 25.17kmpl which makes them the most fuel efficient petrol cars in India. Maruti has recently updated the Alto and the fuel efficiency has now improved by 9 percent at 24.7kmpl.

All the three cars are priced very competitively. The Alto is the most affordable of this bunch here, with prices starting at Rs. 2.47 lakh for the base STD variant, while the CNG (O) variant is priced at Rs. 3.76 lakh (ex-showroom Delhi).