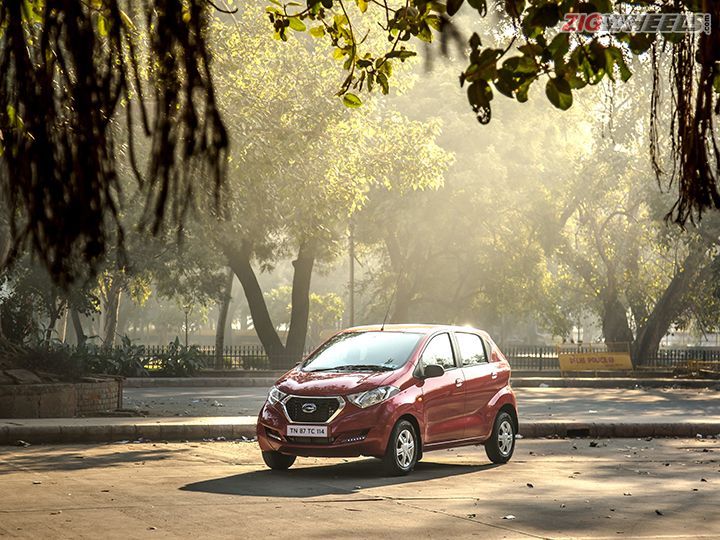 Automatic transmissions are gaining popularity in India as our roads are becoming more congested with every passing day. In order to offer its buyers the convenience of an automatic transmission in a budget, Datsun will soon launch its most affordable car, the redi-GO, with an automated manual transmission (AMT). The redi-GO shares mechanicals with the Renault Kwid and the 5-speed AMT paired with the 1.0-litre engine isn’t an exception either. We drove the redi-GO AMT in the heart of India’s capital to find out whether automating gear shifts has made the little Datsun a better city runabout.

Since the redi-GO AMT remains the same as the redi-GO 1.0, read our review of the latter to know more about the 1.0-litre engine’s performance and the exterior and interior styling. Without beating around the bush, let’s get straight to what’s new here, the 5-speed AMT.

Like we said before, the redi-GO shares the 5-speed AMT with the Renault Kwid, but the carmaker says that the redi-GO’s AMT is calibrated differently. The one thing that certainly separates the redi-GO’s AMT from the Kwid’s is that you get the traditional gear lever instead of the dial-type gear selector in the Kwid. With the gear lever, you also get the option of selecting gears manually, which is not there in the Kwid. The option of shifting gears manually from the floor-mounted gear lever makes driving the redi-GO AMT simple for new drivers and gives more experienced drivers the option of shifting manually as well. For example, while overtaking, shifting manually allows you to hold a gear longer, rather than risking the AMT's speed based shift logic deciding to shift up early while you are in the middle of the overtaking manoeuvre. One thing to keep in mind is that the manual shifts don’t reduce the time of gear shifts, they’re there just to help you stay in your preferred gear, depending on the driving conditions.

Datsun has also incorporated a creep mode in the AMT that smoothens the takeoff and moves the car forward when put in D mode. This makes city driving much easier and you can simply use the brake pedal in bumper-to-bumper traffic. Just release the brake pedal and the car pulls away gently from a standstill; there’s no rush to hit the throttle pedal to get going. It sounds simple but it really makes driving in bumper-to-bumper traffic a much nicer experience.

Also Read: Our review of the redi-GO 1.0 manual

The first thing that you notice while driving the redi-GO 1.0 AMT is the transmission’s eagerness to upshift. Feather the throttle and it shifts from first gear to second at around 15kmph, which is okay. It shifts to third at around 25kmph and to fourth between 30kmph and 40kmph; the shift from third to fourth being sooner than what an experienced driver would anticipate. It’s a great strategy for extracting the best economy from the engine but does hamper drivability in certain situations like fast-moving traffic - typical of a metro city like Delhi, where you want the engine to remain in its sweet spot. But more often than not, in D (automatic) mode the transmission tends to be in a gear too high to maintain pace with the car in front.

That said, it does manage to easily climb many flyovers in Delhi in the third gear, with three people on board. So, unless you’re driving in fast-moving traffic, the D-mode shift logic seems to be spot on. The redi-GO, then, is at its best in the fully automatic mode when driven in a relaxed manner; when you don’t mind a hurried driver overtaking you with just a car’s distance between you and the car in front. The downshifts and the upshifts happen with negligible head jerk and the engine turning over at a relaxed rpm.

Also Read: Our review of the Datsun redi-GO 0.8l

Since there are no mechanical changes compared to the redi-GO 1.0, the redi-GO AMT continues to offer a comfortable ride at city speeds. The steering is feather light at slow speeds which makes it easy to park and turn in the city. However, it feels a bit too light as speeds exceed 60kmph-70kmph.

Not really. The redi-GO looks the exactly the same as the redi-GO 1.0 from the outside. It doesn’t even get an AMT badge anywhere. We, however, wish it had the ORVM housing with internal mirror adjustment and external boot unlock. The redi-GO AMT is based on the redi-GO’s T(O) variant, but the one we drove came with a driver’s side airbag in it. Datsun recently introduced black interiors throughout the redi-GO range and added two features from the T variant onward – remote key and central locking. Despite the all-black interior, the redi-GO feels spacious on the inside.

Also Read: Our review of the Renault Kwid AMT

Talk of equipment and you don’t expect entry-level cars to pack in a lot of tech. So you get front power windows with switches near the gear lever and music system with USB and Bluetooth connectivity and speakers in the front doors. The Datsun redi-GO with dual airbags has scored one star in the Global NCAP crash test, under the #SaferCarsForIndia initiative.

The Datsun redi-GO is now equipped to take on its competition on all fronts with the inclusion of AMT in its range. The Japanese carmaker has done well to offer the option of manual gear shifts and creep with the 5-speed AMT, which not only makes it a better commuter than its manual counterpart but also widens its appeal for drivers with different skill sets. The redi-GO AMT is expected to be priced at around Rs 4 lakh which should make it more affordable than the top variants of both the Kwid AMT and the Maruti Suzuki Alto K10 AGS.