Datsun Go Plus vs Hyundai Grand i10 Petrol Comparison Review

The new Datsun Go Plus goes up against one of our favorite petrol hatchbacks, the Hyundai Grand i10. How does this new concept in the Indian automotive scene fare against the might of the family hatchback? We find out.. 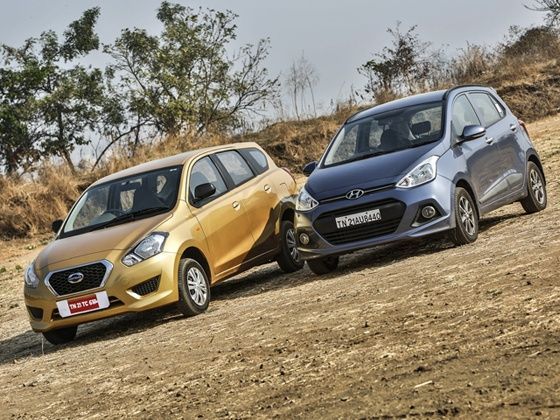 The Datsun Go Plus has created a whole new segment for themselves right in the melee of the cutthroat hatchback segments. With the flexible option of either seven seats or the largest boot in the segment, the Go plus redefines the term Multi purpose. But how does it perform versus a traditional and conventional 5-seater hatchback? Well, read on…

Comparing the Datsun Go Plus to the Hyundai Grand i10 might seem unlikely for most buyers, but since the Grand i10 is something of a benchmark in this segment, we though it would be only fair. Where the Go Plus adopts a more stationwagon style of design, the Grand i10 has a tall boyish stance to it. Something that did strike us though is how both these cars have a moniker in their name that signifies some sort of largeness.

Both also feature a large front grille and nicely sized headlamps that compliment both cars well. The Datsun Go Plus, with its wagon like proportions though does not look as balanced as the Grand i10 does. We also do not like the way the tiny wheel and tyre package fills the wheel arches well. As we know, the car is built on a strict budget, that said, adding a set of bigger wheels and tyres, especially to the top of the line variant is certainly a move Datsun should consider. The Grand i10 also for some reason looks more premium as compared to the Datsun Go Plus. Although that said, the base model of the Grand i10, priced similarly to the top of the line Datsun Go plus comes without wheel trims and body colored ORVMs and door handles.

Packaging seems to one of Datsun’s greatest fortes. Not only is the Go Plus the most spacious car you can buy in its price range, it is also one of the most spacious hatchbacks under Rs 10 lakh. The front and middle row of seats are quite comfortable and it is remarkable how much head room and shoulder room the Go+ has to offer. That said, the seats could have done with a little more padding on the back rest and on the head rests.

Comparatively, the Hyundai Grand i10 does feel slightly smaller on the insides but is actually almost as spacious at the rear. What does excel in the Grand i10 though is the quality and comfort level of the seats. For example, compared to the Go Plus, the Grand i10’s rear seat angle is far more relaxed and comfortable.

In terms of interior design however, the Grand i10 is far more superior than the Datsun Go Plus. Not only are the colors used on the dashboard and on the seats a more pleasing combination, the overall quality too is slightly higher. The Go Plus still has a long way to go in terms of interior appeal before it can meet the expectations of the critical Indian customer.

But it does have a huge trump card over the Grand i10 – boot space. In fact, we don’t recollect the last time a car offered this level of boot space in a car that is priced this low (an old Mahindra Jeep perhaps). But that is of course if you choose to never use the third row of seats. The last row though could of course come handy if you have a couple of small children or dogs, but then, you can forget using the boot to store anything but a few loaves of bread.

The Datsun Go Plus on the other hand does get a very simple infotainment system in the top of the line T variant but only with an AUX port and a USB charging spot. The Datsun Go Plus however does not get even manually adjustable rear view mirrors or inertia reel seatbelts at the rear and of course, no glovebox lid. In fact, one of the biggest negatives about the Datsun Go Plus is the general lack of features that one gets…or doesn’t get.

Hatchbacks are mostly meant for first time car buyers or those looking for a family car that transports them from point A to point B. And both these cars fit the bill to the T. The Go Plus offers relative ease of driving due to its great all-round visibility, light steering and relatively upright seating position. Comparatively, some first time buyers might find the Grand i10 a little cumbersome with its slightly lower driving position which might make it difficult to judge the car’s corners.

The most impressive aspect of the Go+ though has to be the way it rides over rough surfaces. Not only does the go plus feel comfortable on bad roads, the way it absorbs bumps is noteworthy too. The Grand i10 too is a great car in terms of the way it handles bad roads. The biggest difference between both though is how much noise filters through the two cars. Where the Grand i10 is quiet and composed, the Datsun Go Plus does tend to filter a lot of road noise and thuds.

The Hyundai Grand i10 also has a much much better gearbox than the Datsun Go Plus. Although both feel a little notchy, the Grand i10 is most certainly more refined, especially while going through the longer second to third gear shift patterns. The Datsun Go Plus’s gearbox also seems to grind its gears on rare occasions when slotting into reverse which could eventually lead to wear and tear on the gearbox.

Unlike some other Hyundais, the Grand i10 feels well planted at both lower and higher speeds. Body roll is well controlled and it does not lean much during emergency lane change maneuvers or spirited driving. Comparatively, the Datsun Go Plus feels unsettled while driven with gusto. And as we have maintained in our review too, most of this is down to the 155/70 R13 Strada tyres that come with the car. On the other hand the 165/65 R14 tyres on the Grand i10 provide great feedback while offering a good level of grip and composure.

The standard brakes even without ABS assist on the Hyundai Grand i10 feel adequate, but the ABS equipped Grand i10 definitely stops much much quicker and without any hoopla. Incidentally, The Datsun Go Plus’s brakes are also well set up to offer adequate bite when applied in both city usage and under emergency stop situations. While the Grand i10 does get ABS in the higher variants, the Datsun Go Plus does not even have an option in the top of the line T variants.

The Datsun Go Plus is priced between Rs 3.80-4.61 lakh while the Hyundai Grand i10 is priced between Rs 4.62-5.80 lakh (ex-showroom, Delhi). While technically, the two cars fall in slightly different categories in terms of price, they do offer about the same USP – an upgrade from the entry level hatchback like the Hyundai Eon or Maruti Suzuki Alto.

According to official ARAI figures, the Datsun Go Plus is rated at a more fuel efficient 20.6kmpl as compared to the Hyundai Grand i10’s 18.9kmpl. Expect this to be the case in real life scenarios too with most of this slim advantage being down to the fact that the Datsun has a longer and more progressive third and forth gear which helps with fuel efficiency.

The Datsun Go Plus and the Hyundai Grand i10 are quite similar yet so different. Where one is a conventional hatchback that offers an upgrade from a traditional A segment hatch, one is trying to re-write the Indian automotive market. The verdict is simple though, Datsun Go Plus is by no means a poor car, it just isn’t as refined and well put together as the Grand i10 is. What the Datsun Go Plus does have though, is potential. Give it a slightly updated interior, 15-inch alloy wheels with some meaty tyres, some sound insulation and a good infotainment system at around the Rs 5 lakh mark and we are sure more people will opt for it over more traditional cars like the Grand i10. But, as we mentioned, as of today, the Hyundai Grand i10 is still the benchmark.