The GLC experience hasn’t really changed all that much. But that isn’t necessarily a bad thing. 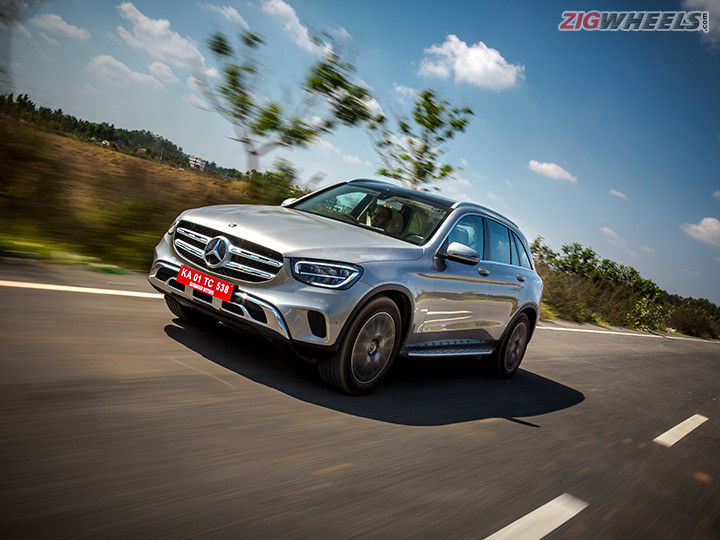 For a little over three years, Mercedes-Benz’ GLC has been a no-nonsense luxury SUV. Sure, it didn’t particularly set benchmarks in any department but it also didn’t give you much to complain -- doing everything you’d ask for. Not surprising then, the formula for the updated GLC is adding a small layer of garnishing over what’s a proven recipe. Let’s dive into what’s changed.

There’s not much to distinguish the newer GLC visually. You’d still recognise it as the small cousin in the Mercedes SUV family, but figuring out it’s the new one isn’t easy. You’d have to spot the mildly reworked front and rear bumpers, and the tail lamps with squared-out LED elements like the larger GLS. The headlamps too are full-LED units now, with a redesigned daytime running lamp setup.

The larger dual-tone dual-tone 19-inch wheels are easier to spot. Shod with 235/55 tyres, the GLC looks confident. Mercedes’ off-road pack comes as standard for the India-spec GLC. That means the ground clearance is raised, the front bumper has a better approach angle, and the side-steps get a tough aluminium-finish — all of which add to the GLC’s practicality.

Step inside, and the cabin is virtually identical. The layout remains unchanged, and so does the touch and feel. So, it’s expectedly rich. Every surface you touch feels like it will possibly outlast you. There’s open-pore wood finish on the dash and the doors, and the cross-hatch texture on the switches feels plush too.

There’s no dearth of room either, the GLC is ideal for a family of four. Getting the fifth occupant is a hassle because of the large transmission tunnel. The updated version is kinder to your luggage though. The capacity remains the same at 550-litres (1,600 with the seats folded), but the spare wheel is now neatly tucked under the boot floor.

That’s what you’d say to interact with the GLC. It now understands voice commands, courtesy the new infotainment system: a 10.25-inch touchscreen (replacing a 7-incher) laced with MBUX (Mercedes-Benz User Experience). Think of this as your Google Assistant, Siri or Alexa. It isn’t as polished as the three but works well for the basic commands you’d give it. You can ask it to set temperature, navigate to a destination, or give weather updates. It’s clever too -- for instance, if the driver/co-driver asks for a particular temperature, it’d set it for only their half. Say ‘I’m sleepy’ and it’ll load up a list of the nearest hotels, while ‘I need coffee’ will have the system tell you where to get your caffeine fix. You can also have some fun with it, and say ‘I love you’ or ‘Who’s your daddy?’ or ‘Tell me a joke!’ The responses don’t disappoint.

There are new ways to interact with the infotainment too. Of course, it begins with the touchscreen itself, that now gets a larger, crisper display. You can choose to use the trackpad in the centre console that gives you ample haptic feedback. Borrowed from the E-Class are the two touchpads on the steering wheel, letting you control the infotainment and instrument cluster respectively.

Speaking of which, it’s beyond us why Mercedes-Benz chose to skip the fully digital driver’s display on the GLC. That old-looking cluster just feels out of place next to that crisp touchscreen. Similarly, the GLC should’ve been equipped with a 360° camera, memory functions for the powered seats and a third-zone of climate control for the rear occupants. There’s no radar-based safety tech either, which the XC60 offers for similar money. However, the usuals are in place -- keyless entry and go, a massive panoramic sunroof, a banging 9-speaker audio system, powered front seats, and a powered tailgate.

A bigger addition comes in the form of E-SIM based connected car tech. As you’d expect, there’s an app that lets you track your car, lock/unlock it and pre-set climate control too. And, if you meet with an accident, the car automatically sends your location to concerned authorities. You also have the option of hitting the SOS button in case of emergencies.

You now get to choose between two new BS6-compliant powertrain options -- both of which will give you mixed feelings. The 245PS GLC 300 petrol has been binned in favour of a lower-powered 200 spec that makes 197PS and 320Nm. This variant isn’t available with four-wheel drive either. If you want that, you’d have to pick the diesel — the new 220 d. At 194PS, it makes 24PS more than the older 220 d, but torque remains an identical 400Nm. Notably, the feisty 300 d variant has been shown the door as well.

We only got to sample the new 2.0-litre diesel, and that too for a brief drive. It didn’t take us long to figure out that the experience isn’t particularly different. Mash the throttle down, and Mercedes claims the GLC will hit 100kmph in 7.9 seconds. But, that’s not what it eggs you on to do. It almost coaxes you into driving in a relaxed manner. And, the easy-going nature of the engine remains intact. You’ll never feel a dearth of power at any point. At the same time, it won’t surprise you either. Some might like this friendly nature of the GLC. While for others (like us), it felt a bit unexciting.

Eco, Comfort, Sport, Individual - you get to pick your drive mode. Each alters the sensitivity of the throttle, gearbox and steering wheel. It feels equally drivable in pretty much every mode, without any unpleasant surprises. The 9-speed gearbox is quick to respond, which means you feel confident making those quick overtakes as well as cruising calmly on the highway. You get paddle shifters too, in case you’re feeling particularly Hamilton-y.

The experience is rounded off by the improved refinement. You’d hear and feel less of the engine inside the cabin, compared to the old 2.1-litre motor. Something you’d definitely enjoy while being chauffeured to work on a weekday, or enjoying some quiet time out at a farmhouse on the weekend.

Even with the larger wheels, the GLC remains comfortable at all times. Smaller bumps and speed breakers are shrugged off without a care, and highway manners are expectedly confidence inspiring too. It does rock about side to side (like most German cars do) over really deep potholes, but it doesn’t unsettle the occupants as much. Much like the engine, the suspension too works in absolute silence. Some greater control over damping would’ve sealed it, for now, the GLC tends to bob slightly before going back to hugging the road.

Most owners will enjoy that, along with how little effort the steering takes. It just does what’s expected from it. Unless you’re driving to set a lap time, you wouldn’t complain about feeling slightly disconnected from the front wheels. The steering feels slightly numb as the speeds go up.

On the whole, there aren’t many holes you can poke into the GLC’s capabilities. Everything you’d expect from a luxury SUV, you get. Quality, presence, practicality and comfort -- it’s all in there. With the added tech and the new quieter motor, the GLC becomes even more tempting. Yes, it could’ve done with more features for sure. None of what’s missing will break the deal for you. Some might wish for more fun and excitement from the motor too.

The updated GLC then is much like the colour it’s finished in. Grey. Practically nothing wrong with that, but it won’t get you excited either. If that works for you, you’d happily ignore the small price premium (Rs 63,000 for the petrol, Rs 1.32 lakh for the diesel) Mercedes-Benz is charging.