The current generation C-Class has had an exemplary run in the first half of its life. To keep the momentum going in its second innings, the C has received some serious changes. What’s new? 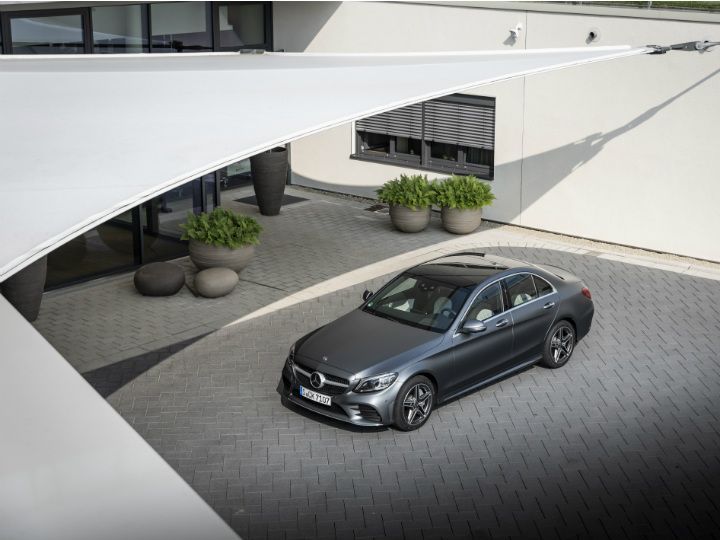 The wow factor of the current generation Mercedes-Benz C-Class has been on point since day one. Endowed with the S-Class’ visual grace and stateliness on the inside and underpinned by a lightweight and ultra-efficient platform, the C-Class has shrugged off the last four years without a care. Although the gearboxes were updated recently, the engines on offer have been carried over from the outgoing generation. Now, as the C-Class readies itself for the second half of its life Mercedes has made several changes to it, some underwhelming and some delightful. Let’s see what’s what and why you might want to wait until October for the C to arrive in India.

We told you there are some underwhelming aspects, and this is the main one! Unless you happen to be the most ardent C-Class aficionado you are unlikely to spot the changes to the S-Class-derived design. Hint, it’s the bumpers. There are plenty of options in terms of 16”, 17” or 18” rims and tyres to choose from. But one clear way to mark your C as a 2019 model is to pick one of the new metallic colours: Mojave Silver and Emerald Green. Matte Grey is another new shade; however, it is reserved for the coupes and cabriolets.

There is one design change that we loved, and that is the new layout for the Intelligent LED headlamps. These full-LED headlamps’ 19 LEDs are grouped into two prominent sections that give it a sinister look. The more high tech MULTIBEAM LED headlamps, offered for the first time on the C-Class, don’t look as cool. However, these allow for “bending” lights and also keep you from blinding oncoming traffic by blocking just the right number of the 84 LEDs. The optional UltraRange lamps can brighten the road upto 650 metres ahead.

For the record, the standard headlamps are halogens with LED DRLs but India could just get LEDs as standard like in some other markets. In which case they will perfectly complement the new tail lamps which look more artistic and stylish because of a more crystalline design for the elements inside.

That’s true! There’s an all-new turbo-petrol engine powering the C 200 now, replacing the old 2-litre engine. This 1.5-litre four-cylinder turbo powerhouse is good for 184PS, same as before. However, the peak torque figure at 280Nm is a bit lower compared to the previous 300Nm. The torque band is also higher up in the rev range. But with tech like variable valve lift and special twin-scroll turbo, responsiveness is expected to be strong.

Not convinced? Well, there is also mild-hybrid tech, or EQ Boost in Mercedes-speak. The starter-generator combination can give the crank a 14PS and 160Nm kick when the turbo isn’t fully up to speed. So, we wouldn’t start complaining just yet.

Not then, for sure. After driving on unrestricted sections of the Autobahn and through many small villages, we came away with two big realisations. First, it doesn’t feel like a “mere” 1.5 litre engine. On the German highways, the C 200 clambered past the 200kmph mark without a fuss, pulling strongly till 5500rpm with power tapering just slightly as it heads to the 6200rpm limiter. It is also happy to hold 120kmph with the engine turning over at a calm 1800rpm. The engine is ready to leap ahead when commanded; however, the pace of the 9-speed gearbox got in the way.

Second, it doesn’t feel turboed or a hybrid. In a good way. That means, it doesn’t let you feel turbo lag and that the way the starter-generator steps in to provide the boost is absolutely seamless. It’s only when you look at the special display that you realise that the electric torque is being pumped in. Rolling around on narrow village roads, the EQ Boost jumped in under 2000rpm to make the going fluid. But it can provide the punch kick when you accelerate hard, upto about 3500rpm. While coasting, the system also tops off the battery by recuperating energy.

Along with its peppy performance and good low-speed usability the C 200 also has an easygoing air that makes it feel like a great companion for your daily city commutes. Mercedes also claims that it is around 10 per cent more fuel efficient. We can’t wait to drive this further on Indian roads.

There is! We will now get a second petrol engine option too, the C 300 petrol! This is from the same engine family as the C 200 but boasts two litres of displacement and does without hybrid tech. This engine promises a lot of punch and could easily be the choice for those wanting a quick petrol C-Class without having to jump all the way to the AMG C 43. With 258PS of punch and a claimed 0-100 time of 5.9 seconds, it is promising and is by no means a paper tiger.

It is properly quick. Mercedes claims that the 370Nm is on tap from 1800 to 4000rpm and it felt that way too as the C 300 overtook vehicles up ahead. With revs comes more power and the scenery seemed to blur a bit faster between 3000 - 4000rpm. It felt perfectly capable, except for two things.

One, for a petrol we would have expected it to be quieter. The engine is audible at startup and as you get going you do know that it isn’t a smooth six-cylinder. On the go, the volume and note persist; however, in Sport+ mode the engine note morphs it into a sporty snort. So, you could enjoy it.

Then there is the gearbox. It tends to hold onto gears a bit longer than necessary, so every now and then we had to pull at the steering-mounted paddles to get the gearbox to shift up and let the revs drop. This was typically under the 100kmph mark. Nonetheless, for those looking to stretch their legs on the highways often, the C 300 will be worth inspecting.

Nope. There’re two new BSVI-compliant diesels coming our way now. The base engine is the 1951cc unit already available in India on the E-Class, which will now make its debut on the C-Class too. This engine, although smaller than the outgoing 2.1-litre engine used on the C 220 d, makes 24PS more power in the C 220 d guise. While peak torque is lower than before - 360 Nm versus 400Nm - it is now available from lower revs. So, it is said to be more efficient, and slashes the 0-100kph time by 0.5 second, claims Mercedes. Why shouldn’t it be - after all Mercedes claims friction has been reduced by 25 per cent and the engine is also lighter by 16 per cent.

But if you were looking for a more punchy diesel, Mercedes-Benz will now offer the C 300 d in place of the C 250 d. This 245PS engine trumps the 250 d by 41PS while continuing to offer the same 500Nm of torque, but over a wider rev range. On the road its easy-going nature felt soothing as we stuck to speed limits around the small Bavarian villages. It ambles about at just over 1000rpm, and the turbos pour the go-go juice from 1400rpm. So, a change of pace never bothers the C 300 d.

And does it grumble? At idle, a bit. But after that it keeps a well-mannered tone throughout, even when you rev it hard. The only stutter in this sweet-talking package is from the 9GTronic when asked to handle a quick change of pace from lower speeds.

On the whole, yes. The C 200 felt like a city bred youth, light on its feet, ready to amble or sprint and at ease through it all. The C 300 petrol is a more potent package for people with more pressing lives, although it requires some adjustments from you too. The C 300 diesel has a similar potency but feels more in tune with the driver, and more willing to adapt too. The choice of driving modes finetunes their nature further. Comfort makes the throttle, gearbox and suspension adequately relaxed. For more sporting moments you have the Sport and Sport+ modes where the throttle becomes sharper, gearbox keener, and, except for the diesels, there are sportier exhaust notes to give you company too.

The design for the cabin is unchanged save for a few key changes. Apparently, the fingerprint-hungry and scratch-loving piano black trim are falling out of favour with buyers. So, you have more wood trims to choose from: open pore brown walnut and anthracite oak. These are, roughly translated, non-lacquered wood finishes in brown and black.

Contrasting beautifully with that are the crisp displays. A 16:9 (read short and wide) hi-def 10.25” screen for the infotainment sits popped up on the dash, and the driver can also choose a 12.3” full digital display as the instrument cluster. Borrowed from the S and E-Class, the display has three layouts to choose from. The crisp graphics and bright colours and the many combinations of how to display the information you want make it look quite attractive. Feeling sporty? Boost pressure, g-forces can be called out. At more ordinary times, navigation instructions can be pulled onto a part of the screen.

There is lots more technology, for sure. It is all supported by an all-new 48-volt electrical architecture that has made the host of new technologies possible. You now get features from the S-Class making their way into the C.  Active steering assist can now steer for you, and when combined with Distronic active distance control, the C is also capable of driving semi-autonomously.

We let the C drive through the boring bits of the test route and it steered smoothly through curves and even through the village main streets, safe in the knowledge that it could make emergency stops too. While we were happy to keep our hands off the wheel, the system, as required by law, requires the driver to keep his or her hands on the wheel or it will remind you to do so. Interestingly, Mercedes now also has a feature that lets you know if your car has been in a “parking accident.” Basically, if anyone bumps into it, or it is towed away or broken into, an alert is sent to your phone via the “Mercedes me” app which even shows the area where the damage may have occurred.

If you judge the facelifted C-Class on its ability to impress the casual observer, it would score poorly. However, Mercedes-Benz has done what was required. The new lineup of engines gives it a feature and technology boost - under the hood and in the cabin - that makes it feel like a more sophisticated and capable companion. The new digital displays are offered as options in Europe but we can expect Mercedes-Benz India to equip only their top of the line variants with these.

The new engines aren’t the kinds that will make you go week in the knees. Despite the slightly jerky shifts from the gearbox the C-Class proved to be easy to drive, packs sufficient performance and promises better efficiency and emissions too. We can expect the prices to be hiked by Rs 1 lakh-1.5 lakh for the updated models. The C-Class will be launched in India by October and is an update that’s worth looking forward to.