The F-Type SVR is faster, louder, quicker, but better behaved! Sounds strange? We spent a few hours to get to the bottom of it. 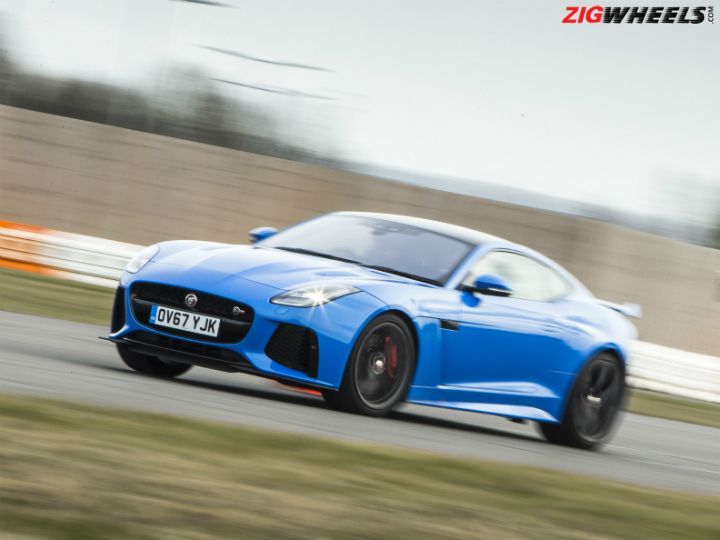 Raw and uncouth muscle car manners draped with British elegance - that’s how the raucous V8-powered Jaguar F-Type always came across to me. But clearly, the folks at Jaguar’s Special Vehicle Operations unit thought it to be a bit tame. So they poked around and made it madder still, on paper. Oddly, Jaguar claims that the F-Type SVR despite the more exciting numbers is a car for all seasons and drivers of all kinds of skill sets. Read, not-racers. Us. We headed to Jaguar’s testing grounds to get a taste of the SVR before it lands here in India. Now, let's get your questions answered.

How much faster is it?

Whether coupe or convertible, the F-Type SVR breaks the 300kmph mark by a significant margin. The maddest of the “regular” F-Types is good for 300kph only: The coupe will hit a claimed 322kmph, while the convertible is restricted to 314kmph.

Ah, you mean quicker! That’s more exciting too! The SVR, coupe or convertible, will do the ton in 3.7 seconds - that’s 0.4 seconds sooner than the 550PS versions of the F-Type. Part of the credit has to go to the 25kg of weight savings over the F-Type R AWD. The titanium exhaust and some other aluminium bits under the skin help with that. If you choose some optional extras like forged rims and Jaguar’s Carbon Ceramic Matrix brakes the overall weight reduction is 50kg.

So what’s under the hood?

Same old, same old. In terms of hardware the 5-litre supercharged V8 is carried over, and it even has the same 8-speed gearbox from ZF. But the supercharger and cooling systems have been altered to deal with the higher performance demanded by the more aggressive electric brain. The result is 575PS of power and a stonking 700Nm of torque! And the torque is available in a wider rev range too: from 3500rpm - 5000rpm. SVO also says that the shift calibration of the gearbox has been tweaked to make it more exciting. And, obviously, the exhaust note sits on the right side of legal levels, just about.

Will it kick it tail around even more?

You bet it can! But to make the SVR more cat-like, the power and torque is sent to all four wheels as standard. And yes, the all-wheel-drive system is borrowed from the regular F-Type R. All of the power is delivered to the ground via tyres that are 10mm wider compared to the R: that's 265/35 ZR20 at the front and 305/30 ZR20 at the rear.

What about the wing?! Tell us!

That gorgeous carbon-fibre piece of active aerodynamics is optional. Yes. And, you need it if you want the 322kmph top speed. It has essentially a high position and a low position. But wait, those are a bit misleading. The high position is a bit higher but the wing angle is a lot more aggressive to increase downforce. The car’s computer actively adjusts the angle depending on what you are doing. It will give you more downforce in corners by increasing the wing angle or reducing it for straights. However, if you want to do a top speed run, you will have to manually choose the low setting.

Aero has been improved in other ways too. For instance, the bulky exhaust muffler that sat below the boot has been done away with to clean up the airflow and save weight too.

This SVR is said to be sharper to attack corners better, thanks to many alterations under the skin. Obviously, the suspension has been recalibrated: the continuously adjustable dampers get new valves and logic and there’s a slimmer anti-roll bar at the front, but the anti-roll bar at the rear has been beefed up. There’s a much stiffer aluminium knuckle too, on which the rear wheels sit. The torque vectoring system has also been recalibrated to help with turn-in. So, all in all, the F-Type SVR is expected to be more confident and sharper too.

We got some time with the F-Type SVR at the Gaydon test track. Our time there was limited and broken up into sections of slaloms, brake tests and some chaperoned laps around the track. But, one thing is clear: the SVR is mad but at the same time more forgiving. Running through the long never-ending left-hander at 120kmph it didn’t feel like it would snap out from under you if you stepped on the gas. The light and direct steering made it quite delightful to make the micro-corrections to stay on the line. It feels significantly different to chuck when compared to the two-wheel drive F-Types we have driven in India. You can turn in later and with more aggression. There’s lots of grip to rely on. Overdo it, and you will get understeer. But on the whole, the SVR feels like we would have wanted less muscle car and more sportscar.

Listening to the engine roar as it revs to the 6600rpm redline in Dynamic mode before shifting up is the SVR’s calling card. You’ll get your answer. No. The rasp and rumble make you and bystanders smile. The pace is undeniably rapid and exciting, hitting 290kph was done without a fuss. Into the braking zones, the optional carbon ceramic brakes offered better feel, and, being larger, offered stronger bite when compared to the standard steel units. Rather than outright pace, it was the urgency of the throttle response that made me prod the big pedal with care when balancing the F-SVR through the bends.

No, we think not. Over some rough road test tracks we were jigging about in our superb seats, but more often than not the cruelty of the bumps and scooped-out tarmac didn’t quite make it into the cabin. While on Indian roads you will still have to watch out for the craters to save the rims, for the most part, the F-Type, even in SVR guise, doesn’t seem any less livable than the regular F-Type. Normal mode softens the suspension and engine responses sufficiently too.

Right, the SVR, except for the few aero updates like the wing and the vents behind the front wheels, looks pretty regular. Of course, the wheels, the SVO badge on the boot and the four exhaust tips poking out prominently from the rear bumper will clue people in too. On the inside, quilted and perforated leather with contrast stitching, and Alcantara will subtly increase the sense of specialness. However, the basic design and materials remain unchanged, an area where we think the F-Type could do with more wow. Shutlines and plastics are just a touch off the “sweet” point. And the competition sets a high benchmark. However, the manufacture year 2019 F-Type SVR that will make its way to India will come with updated infotainment systems and a larger screen too.

When can we have it?

The F-Type SVR will come to India around August 2019. It will be the third of four SVO products that JLR plans to bring to India in the coming year. You can expect prices to stay in the same range as the existing range. Which is around 2.5 crores for the Coupe and 2.7 crores for the Convertible. While it isn't going to leapfrog its competition,  the F-Type SVR seems to deliver, faster, louder and nicer.