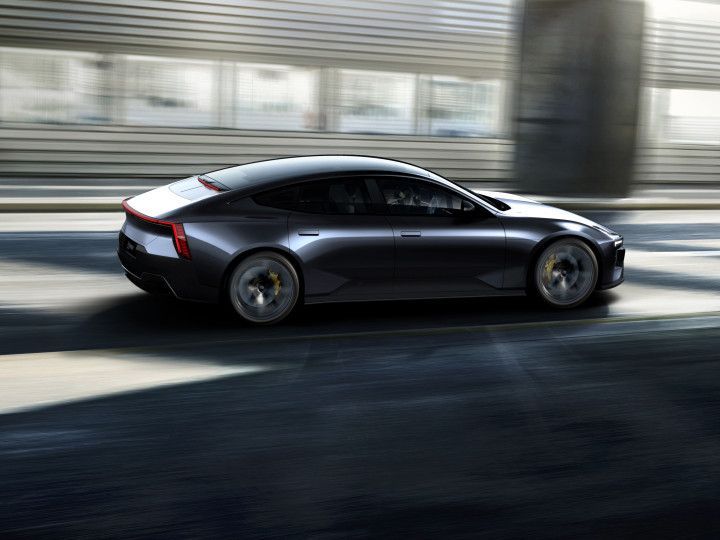 Polestar has given us its first sneak peek of its upcoming all-electric grand tourer, the Polestar 5. It is essentially the production version of the Precept concept car that debuted last year. And if you know what the concept looked like, this would be very easy to recognise as Polestar has barely strayed away from its design.

At first glance, you will notice that the smooth flowing lines and curves of the Precept concept have been retained here. Even the clean flowing silhouette seems to be unchanged. But there are a few changes. For instance, the cameras of the show car have been replaced by conventional mirrors while the production car will not get those sweet looking suicide doors.

The front-end features the Polestar’s latest iteration of the Thor LED headlamps. Even the massive glass roof of the Precept concept seems to have made it to production. Then there’s the fact the rear-end gets sleek connecting LED tail lamps, adding to the futuristic look. That said, Polestar has slightly altered the positioning of the rear spoiler, probably for aerodynamics.

An interior picture is yet to be shown to the audience. But we reckon it should feature the Android-based infotainment system that’s seen on its siblings. Naturally, this being a part of Volvo and Geely group, it should come with a high quality cabin befitting its segment. Even the safety features should consist of the latest advanced driver assistance systems.

There is still no word about the Polestar 5’s powertrain. So we would keep you updated on that front once it has been revealed.

The Polestar 5 will enter production in 2024 and will lock horns with the Audi e-tron GT, Porsche Taycan, and Tesla Model S.