Here’s The Kia Sonet Before You’re Supposed To See It!

The new sub-4m will lock horns with the Hyundai Venue, Tata Nexon, Mahindra XUV300, and the upcoming Nissan Magnite and Renault Kiger 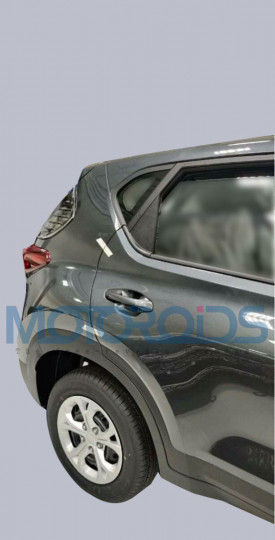 The Kia Sonet, first introduced to the world at the 2020 Auto Expo in concept form, is slated to be revealed in its production-spec form on 7 August. While Kia has been teasing the Sonet reveal with glimpses of the front of the car, it has recently been spotted almost fully uncovered and it looks pretty close to the concept we saw a few months ago. Since the front of the sub-4m SUV was covered, let’s take a look at the rest of the Sonet.

Steel wheels seen on the model suggest that the spied model was only a base variant. The connected tail lamps look exactly the same as seen on the concept, except that the bar between them doesn’t look like it can light up. The black gloss inserts on the side of the rear windscreen are also similar to the concept, and it gets a massive faux skid plate.

Just like the Kia Seltos and Hyundai Creta, the Sonet will share its powertrain options with its sibling, the Hyundai Venue. It is expected to get the same 1.2-litre petrol, 1.0-litre turbo-petrol, and 1.5-litre diesel engines. The main highlight will be Hyundai-Kia’s new clutchless manual 6-speed iMT transmission, with the other options being the standard 5-speed/6-speed MT and 7-speed DCT.

Kia’s third offering in India, the Sonet is expected to outperform its competitors, just like the Seltos and the Carnival. While the Seltos has received tough competition from the 2020 Hyundai Creta, the Sonet is bound to make waves across the segment with its impressive design and feature list. It is expected to be priced around Rs 7 lakh to Rs 11.5 lakh and will lock horns with the Hyundai Venue, Maruti Suzuki Vitara Brezza, Tata Nexon, and Mahindra XUV300. It will also face stiff competition from the upcoming Nissan Magnite and Renault Kiger.