Here’s Your First Look At The Kia Sonet GT Line Interior, Before You're Supposed To See It

As expected, the interior of the Sonet borrows quite a lot of elements from the Seltos 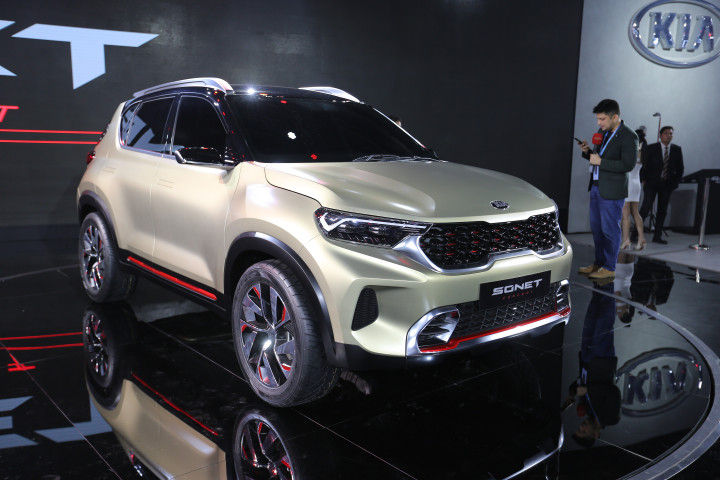 Kia India has announced that the Sonet will be launched on August 7. While the exterior of the sub-4m SUV has already been partially revealed through teasers and spy shots, its interior has been spied now -- and that too in the top-of-the-line GT Line trim. This confirms rumours that the Sonet will be available in two broad trim levels -- Tech Line and sportier GT Line -- like the bigger Seltos.

As expected, the Kia Sonet borrows most of its interior elements from the Seltos, including its steering wheel, instrument cluster cowl and the touchscreen infotainment system. The Sonet's 10.25-inch touchscreen makes it the largest offering in its segment. Although it does not get the Seltos’ 7.0-inch TFT LCD screen for the MID, it does get a multi-colour display with a digital reading for the speedometer.

The Kia Sonet will share powertrain options with its sibling, the Hyundai Venue. It will get a 1.2-litre petrol, a 1.0-litre turbo-petrol, and a 1.5-litre diesel engine. Drive will be transmitted through the standard 5-speed/6-speed manual transmission and 7-speed DCT. The Sonet will also get Kia-Hyundai's new 6-speed iMT clutchless manual transmission as an option.

The Sonet is Kia's third offering in India after the Seltos and the Carnival. It is expected to replicate the success of the Seltos with its bold design and massive host of features. It will lock horns with the likes of the Hyundai Venue, Mahindra XUV300, Ford EcoSport, and Maruti Suzuki Vitara Brezza. The Kia Sonet is expected to be priced from Rs 7 lakh to Rs 11.5 lakh.