The T-ROC is VW’s first attempt in the premium midsize segment. But how does it fare when pitched against its only competitor, the Jeep Compass? Let’s find out 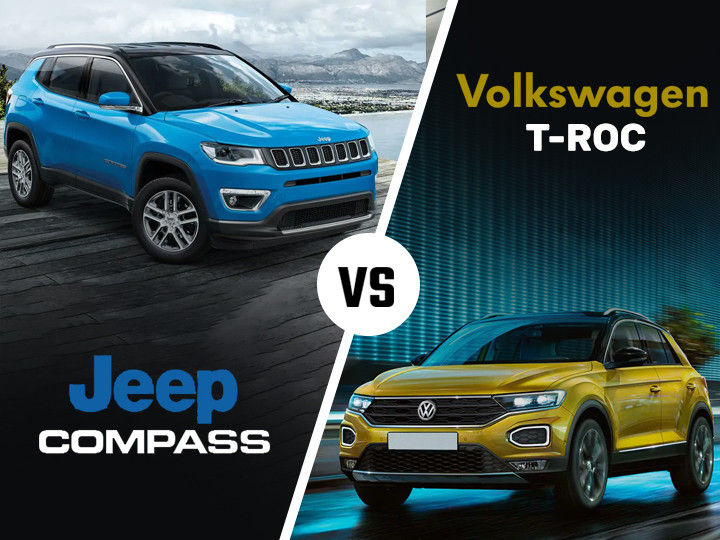 Volkswagen India has just launched the T-ROC at Rs 19.99 lakh (ex-showroom India). The T-ROC is being offered via the CBU (completely built unit) route and comes in one single, fully-loaded variant. It marks Volkswagen’s foray into the premium midsize SUV segment and it locks horns with the Jeep Compass. So how does the T-ROC fare when pitched against the Compass? Should you consider it over the Jeep that enjoys a loyal fan base in India? Let’s find out.

Overall, the Volkswagen T-ROC is a tad smaller than the Jeep Compass. In terms of length, it’s 53mm shorter than the Compass and has a 46mm smaller wheelbase as well. And thanks to the sloping roofline, it is not as tall as the Compass either. But despite its smaller length, the T-ROC offers a larger boot.

Both models have an almost identical feature list and will satisfy most of your requirements. Both SUVs are equipped with a touchscreen infotainment system, Android Auto and Apple CarPlay, dual-zone climate control, cruise control, a panoramic sunroof, keyless entry with push-button start, auto headlamps and wipers, and an auto-dimming interior rearview mirror.

Even though the T-ROC comes with a fancy digital driver’s display, it misses out on powered front seats, a crucial feature the Jeep Compass offers. However, if you are looking for a petrol SUV with cruise control, you are limited to the T-Roc as the Compass only offers this feature with the automatic variants only.

The Volkswagen T-ROC comes with a 1.5-litre TSI petrol engine that develops 150PS of power and 250Nm of torque. Though the TSI motor is not as powerful as the Jeep’s engine, it does have similar torque output.

The T-ROC also comes with active cylinder technology which shuts down two cylinders depending on the load. This technology should enhance fuel economy by quite a margin. That said, VW is yet to reveal the official fuel efficiency figures for the T-ROC. The Compass petrol has a claimed fuel efficiency of 14.1kmpl.

The T-ROC can be had with a 7-speed DSG only. On the other hand, the Compass’ base variant is offered with a 6-speed manual while top-spec variants utilise a 7-speed DCT.

Sure, the Jeep Compass may come across as the more attractive option here as it has a lower starting price thanks to the base-spec manual variant. However, if you’re considering a top-spec, premium, midsize SUV, the Volkswagen T-ROC seems like a better deal. Also, when you consider the fact that it’s a fully imported unit and costs a full Rs 1.93 lakh lesser than the range-topping Compass, the Volkswagen seems like a steal thanks to the additional features on offer.