Both the YZF-R1M and YZF-R1 share the same newly-designed engine, featuring a 998cc liquid-cooled, 4-stroke, in-line four- cylinder, 4-valve system with a crossplane crankshaft. The high-end YZF-R1M gets advanced suspension and electronics and will cost about Rs 7 lakh more than the YZF-R1 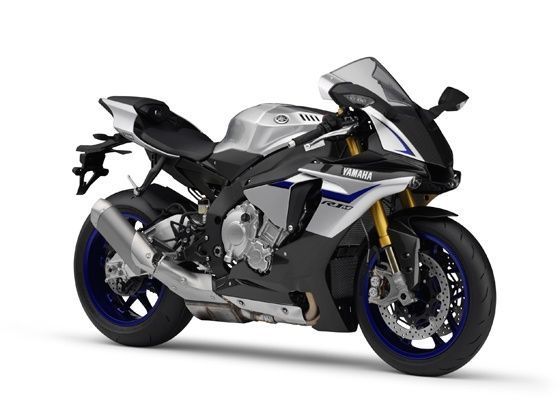 The Yamaha YZF-R1M is available in a shade named Bluish White Metallic 2 and the YZF-R1 is available in two new colours - Deep purplish blue metallic C and Vivid Red Cocktail 1. The new bikes  are based on Yamaha’s "High Tech Armed Pure Sport" concept of an all-out supersport model fully armed with advanced technology.

Designed to be the fastest machines on the circuit, they allow riders to experience firsthand the technical philosophy behind Yamaha’s MotoGP racing machine, the YZR-M1.

This new engine achieves maximum power of 200PS, an increase of approximately 18PS over the current R1 model. Yamaha Motor's engineers implemented weight reduction technology throughout the new model to lighten it by approximately 4kg. In addition, the engine width is reduced by 34mm.

The full screen of the TFT LCD digital meter created a "bar display tachometer", accelerometer and brake pressure displays etc. that give a similar visual impression to analog meters. The rider can select from two different display modes: "Street", which is tailored to travel on public roads, and "Track" which prioritizes the information displays required for race and circuit riding.

A communication control unit (CCU), standard on the YZF-R1M and optional on the YZF-R1 enables recording of the riding conditions through logging functionality, and automated circuit lap time measurement using GPS. It is also possible to create settings data on smartphones via an application that can be downloaded to any Android-based smartphone.

Based on the “Speed Racer” concept, the new models have a light, slim, and compact look. The new fairing shape features the cross-layered wing – an aerodynamic characteristic which allows airflow to cross between the inside and outside of the fairing. The front face of the new models inherits the twin-headlight configuration found in the R-series of the past, yet it bears a strong resemblance to YZR-M1.

The new YZF-R1M and YZF-R1 will compete against the recently launched Kawasaki Ninja H2 and Ducati 1299 Panigale in India.