BMW launches the new petrol powered Mini 3-Door Cooper S at Rs 34.65 lakh. It will be sold in India via the CBU route. For more details of the new Mini Cooper S log on to zigwheels.com 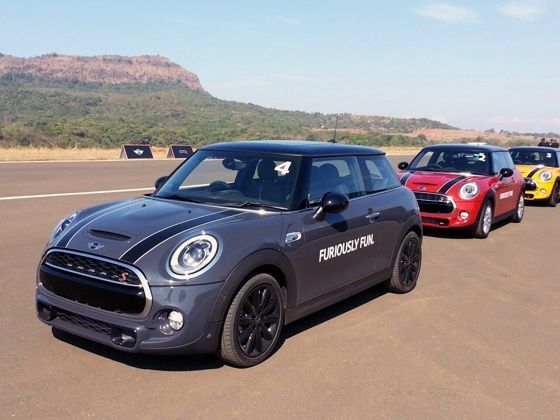 A few months after the launch of the 2015 Cooper D 3-door and 5-Door, Mini has now introduced the 3-Door Cooper S. The UK-based car maker claims that the petrol powered Cooper S is targeted towards serious Mini enthusiasts while the diesel is focused towards a buyer new to the brand.

To be sold just in the 3-Door form, the Mini Cooper S is the most powerful amongst its product line-up. The Cooper S sports a 2.0-litre 4-cylinder twin-turbo unit that makes 192PS and 280Nm of torque. The engine has been developed from scratch for the new Cooper S and in this state of tune it can touch the 100kmph marker in just 6.7 seconds and recoed a top speed of 233kmph. It comes mated to a 6-speed automatic Steptronic gearbox.

At the launch, Philipp von Sahr, President BMW Group India said, Minis have always have a knack for speed and agility and the new Mini Cooper S takes that passion even further. The powerful Mini TwinPower Turbo 4-cylinder engine takes the classic Mini go-kart feeling to new heights as it revels in the mindblowing force of increased power and acceleration. The new Mini Cooper S is furiously fun and ready to dominate the Indian streets like never before.”

On the outside the 3-Door Mini Cooper S looks similar to its diesel sibling except for a new grille and bumper up front and 10-spoke alloy wheels. The insides too continue to have the retro-Mini look and are once again similar to the diesel variant.

Mini has brought the Cooper S to India via the CBU route which has had a direct effect on the price too. Launched at a prices of Rs 34.65 lakh (all-India ex-showroom), it also packs a lot more features than its diesel variant.