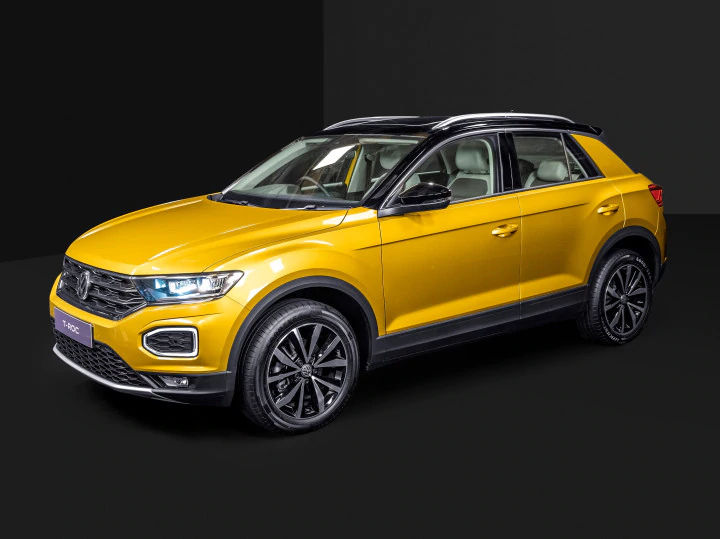 UPDATE: Volkswagen India has launched the T-ROC in India at Rs 19.99 lakh (ex-showroom).

Volkswagen India is all set to launch the T-ROC on March 18. Volkswagen’s premium midsize SUV, the T-ROC will be brought to India as a completely built unit (CBU). It’ll be offered with a BS6-compliant petrol engine only. Here are five things you need to know about VW’s upcoming SUV:

The Volkswagen T-ROC looks like a typical VW with plenty of straight lines and sharp creases. That said, there are a few elements that could catch your eye. For instance, the DRLs that surround the faux air dams look quite funky. The sharp shoulder line and the taut profile give it a sporty look. Other highlights include a familiar VW grille, LED projector headlamps, and split-LED tail lamps.

The interior of the VW T-ROC comes with plenty of familiar bits such as the 3-spoke steering wheel, infotainment system and climate control knobs, which seem to be a straight lift from the bigger Tiguan Allspace. The interior also comes with colour coordinated bits, which add a bit of funk.

Expected features in the VW T-ROC include connected car technology, Android Auto and Apple CarPlay, dual-zone climate control, cruise control, a panoramic sunroof, powered front seats, auto headlamps and wipers, as well as keyless entry with push-button start. On the safety front, it could come with a minimum of six airbags, front and rear parking sensors, a rearview camera, and electronic stability control.

The Volkswagen T-ROC will be powered by a 1.5-litre TSI EVO petrol engine that develops 150PS of power and 250Nm of torque. The EVO tag refers to its active cylinder management system, which shuts off two cylinders during less load for additional fuel efficiency. The T-ROC will be offered with a 7-speed DSG only.

Expect the T-ROC to be priced upward of Rs 20 lakh (ex-showroom) as it’s brought to our country as a CBU. The T-ROC will lock horns with the Jeep Compass and the upcoming Skoda Karoq.