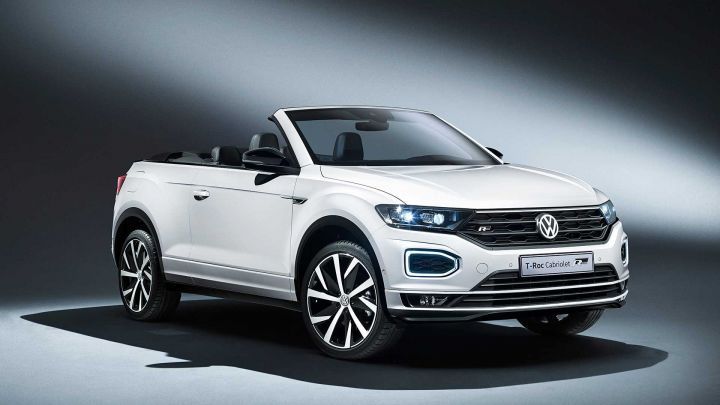 Volkswagen will join the likes of Range Rover, not by debuting a butch 4x4 but rather a cabriolet SUV like the Evoque Convertible. Yes, as weird as it sounds, Volkswagen has taken the wraps off the T-Roc Cabriolet which comes with an electrically folding soft top. Set for a world premiere at the upcoming Frankfurt Motor Show, the cabriolet will go on sale from mid-2020. Some time before that, closer to home, Volkswagen will debut the standard T-Roc SUV to take on the Compass and the likes in the mid-size SUV segment.

Obviously, the SUV ( if you like to call it that) has ditched its hard roof and SUV cues to become a soft-top convertible which sort of questions the whole point of the T-Roc being a chunky SUV. On the bright side though, the soft top can open in nine seconds and at speeds of up to 30kmph.

It comes in two trim options: Style and R-Line. As the names signify, the former is the sombre version while the R-line adds more drama to the package. The T-Roc convertible is powered by two engine options: a turbocharged 1.0-litre three-cylinder making 115PS or a turbocharged 1.5-litre four-cylinder good for 150PS. Gearbox options include a 6-speed manual and a 7-speed DSG.

The standard T-Roc is offered with six TDI and TSI engine options in various global markets. These engines have outputs ranging from 85PS TO 190PS. In India, the SUV is likely to be offered with a choice of a 1.5-litre TSI EVO petrol and 2.0-litre TDI diesel engines. It could get the option of a 6-speed manual along with the tried-and-tested 7-speed DSG gearbox.

Volkswagen is trying to crack a highly competitive segment with the T-Roc in India. The Kia Seltos is the latest entrant in a segment which also comprises of the Tata Harrier, MG Hector, Hyundai Creta and the Jeep Compass. We think that the SUV will initially come as a CBU with the German carmaker likely to begin production based on market response. And for the pricing, expect it to range from Rs 17 lakh to Rs 20 lakh (ex-showroom). And if you dig the T-Roc Cabriolet, we are sorry to inform that the chances of it making it to our country is virtually nil.