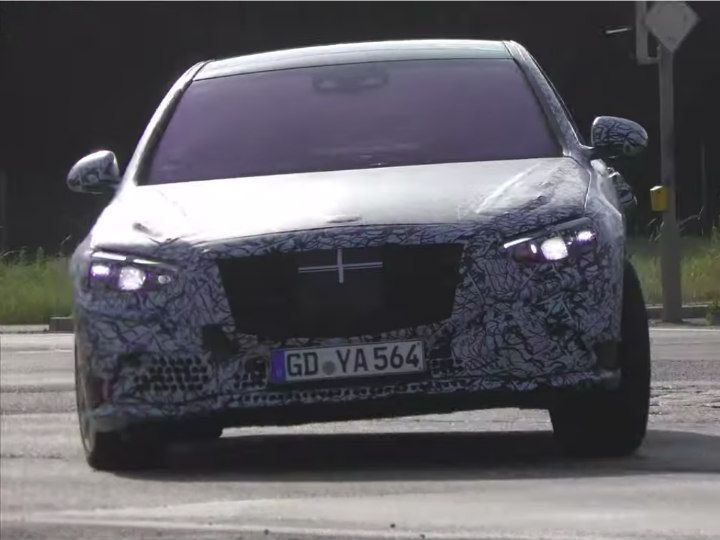 Mercedes-Benz has been prepping the next iteration of its S-Class sedan for quite a while now. Codenamed W223, the sedan has been spotted multiple times on the public roads all over Europe with different camo wraps around the sedan. Now, more spy footage of the flagship sedan being tested in a camo wrap on the streets of Europe has surfaced online.

The S-Class spotted recently also had a heavy camouflage hiding most of its design elements. A key highlight of the new S-Class though will be the pop-up door handles, which too were completely covered this time around. What’s visible though is the signature Mercedes grille and LED headlamps that will come with the automaker’s ‘digital light’ system that can project shapes and words on the ground in front of the car.

At the rear, the S-Class is still heavily camouflaged like in earlier spy shots. Not many details have been revealed yet, but what we do know is that it will feature sleek LED tail lamps with trapezoidal exhaust tips that come with the top-end S 560 model.

Coming to the interior, the next-gen S-Class is expected to receive a Tesla-esque interior overhaul. Key highlights include a huge centre console that could give the driver access to almost all the features of the car, including the infotainment system, climate control, vehicle parameters, ambient lighting, and more. The S-Class is also expected to feature the latest MBUX system from Mercedes, with augmented reality and intelligent voice control. It will link the all-digital driver’s display and the infotainment system. Other interior highlights include a brown and beige dashboard with plenty of customisation options, including different colours, inlays and trims.

Mercedes is yet to reveal details on what could power the sedan. But we expect the 2020 S-Class to be powered by either a 4.0-litre twin-turbo V8, a 3.0-litre twin-turbo six-pot or even a hybrid powertrain. Unfortunately, these are all speculations up to this point.

Despite the scarcity of details, we do know that Mercedes-Benz is expected to debut the S-Class sometime next year and it is likely to make its way to India soon after. The 2020 S-Class is likely to get a slight price hike compared to the current model that is priced from Rs 1.36 crore for the S350D and goes up to Rs 3.02 crore for the top-end S63 AMG variant (both prices ex-showroom Delhi). Further details on the sedan might only be revealed once its debut is a few months away