Here’s All You Need To Know About The Ultraviolette F77

The Ultraviolette F77 is a sporty all-electric alternative to 300cc performance motorcycles sold in India. Find out more about it here: 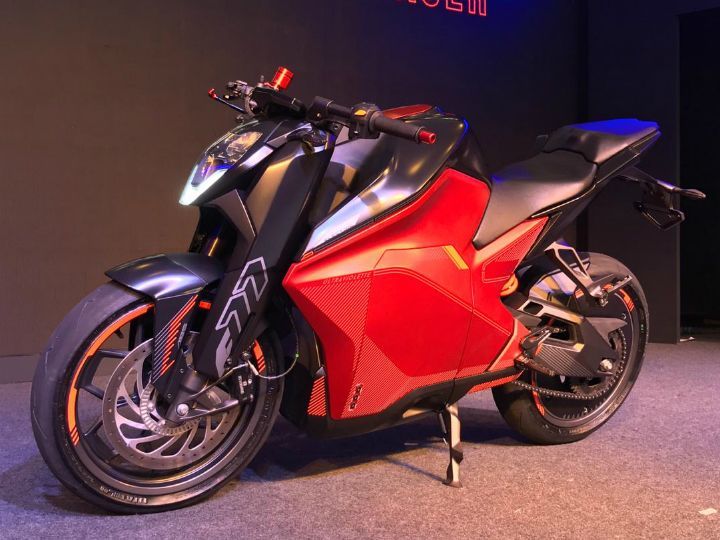 Ultraviolette has launched India’s fastest electric motorcycle, the F77. It offers performance on par with 300cc sports bikes. It even impresses with its battery and charging technology. This new electric motorcycle is an interesting proposition and here's all you need to know about it.

Ultraviolette claims the F77 does a VBox tested 0-60kmph in a scant 2.92 seconds and 0-100kmph in 7.03 seconds. That is as quick as the Apache and just a second off the 0-100kmph figure of the KTM 390 Duke! You can check out the performance comparison between the three here. The VBox tested top speed is 147kmph which is quite quick for an entry-level performance motorcycle. These figures are courtesy a 25kW BLDC electric motor which offers upto 90Nm of torque. There is no gearbox and so there are no gear and clutch levers. The F77 has its rear brake lever mounted near the right leg like conventional motorcycles.

It offers a good range as well:

The 4.2kWh modular battery platform holds three swappable lithium-ion battery packs which offer a combined real-world range of 130 to 150km on a full charge. For reference, the Revolt RV 400 offers an ARAI tested range of 156km.  Each battery pack weighs just 8.5kg and is brimming with tech. You can read all bout it here.

Like the Revolt RV 400 and Ather 450, the F77 is loaded with features and technology. You get the de rigeur all-LED lighting, a full-colour TFT screen, Bluetooth connectivity, over-the-air updates, three ride modes (Eco, Sport & Insane) and a dedicated app that displays important details like the battery charge and range. It also allows you to adjust torque delivery and battery regeneration level as per your liking.

You can charge it three ways:

The F77 comes with a built-in 1kw AC charger which plugs into your household three-point power socket. With this setup, the batteries can be charged upto 80 percent in three hours and fully charged in five hours. Ultraviolette also offers a 3kW DC fast charger that plugs into the socket over the dummy fuel tank. It charges the batteries upto 80 percent in less than 50 minutes while a full charge takes less than 90 minutes. The compact fast charger needs a 15 amp socket and would cost an additional Rs 20,000.

The third option is a Home Charging Pod which can hold upto three battery packs. You can simply remove the battery packs from the motorcycle and charge them at home on the pods. Ultraviolette will also sell separate battery packs so if you have range anxiety, you can carry one pack along. You can run the F77 on a single battery pack but it will offer performance on par with 150cc bikes.

It gets sporty underpinnings:

The Ultraviolette F77’s underpinnings are quite similar to that of the KTM 390 Duke. It is based on a trellis frame and gets an upside down cartridge type forks and gas-charged monoshock. A 320mm front disc with 4-piston ByBre radial caliper and 230mm rear disc along with switchable dual-channel ABS takes care of braking. However, the tyres are more premium Metzeler Sportec M7 radials.  Pirelli Supercorsas will be offered as an option.

It has tricky pricing:

Ultraviolette has officially launched the F77 but has not given out the exact price of the bike. Instead, the company has said that the F77 will be priced in the range of Rs 3 lakh to Rs 3.25 lakh on-road. The motorcycle will initially be available in Bangalore, with deliveries set to begin in October next year. You can pre-book the motorcycle by logging into Ultraviolette’s website.