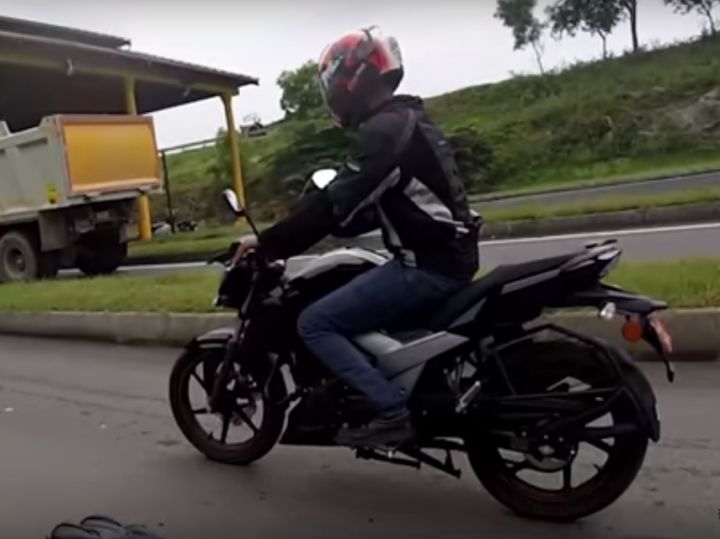 The TVS Apache RTR 160 has always been TVS’ most popular motorcycles. It is also the only bike that has managed to give the Bajaj Pulsar 150 a run for its money over the past few years. With the Bajaj receiving an update earlier this year, the Apache RTR 160 has been feeling a bit left out. With passage of time, it has started to show its age and begs for a proper makeover. The boffins at TVS have taken note of the situation and have begun working on an all-new version. Just look at the spy shots of the 2018 Apache RTR 160. Man, it doesn’t disappoint! The tank, tailpiece and the LED tail lamp are similar to the RTR 200. The  centre panel is different though.

Through our sources we can confirm that the 2018 TVS Apache RTR 160 will see its India launch before the first half of 2018. From what the pictures suggest, the RTR 160 will take over not just the split double cradle frame and suspension of the RTR 200 but also the body work and exhaust canister. It will also get a fully digital instrument console like its elder sibling.

Suspension duties will be handled by 37mm front forks and a gas-charged monoshock damper at the rear, which should make it more reliable and efficient when compared to the dualshock units seen in the current version. For braking, the current variant employs 270mm disc brakes as the RTR 200. The difference, however, comes in the form of the rear disc. Where the smaller bike gets a 200mm disc, the 200cc motorcycle gets a 240mm disc. Hence, there’s a chance that the rear disc could be replaced on the 2018 variant of the RTR 160 as well. The bike, however, will continue to utilise a single piece seat unlike the RTR 200, which gets a two-piece seat.