Let’s find out if the new 125cc scooters seen at the Auto Expo have what it takes to challenge the feature-rich Honda Grazia, on paper 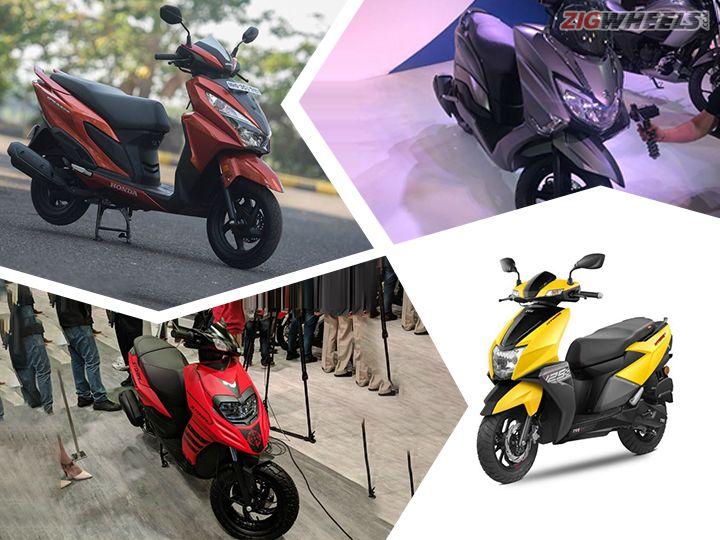 Auto Expo 2018 saw many 125cc scooters making their official debut. They will soon compete in one of the fastest growing and fiercely contested two wheeler segments of India, which has been upped a notch by the Honda Grazia. So far the Honda Grazia has been giving the Suzuki Access 125 tough competition, but that might change soon. Today, before we pit them against each other on tarmac, we compare how they stand on paper.

Meanwhile, Suzuki has equipped the upcoming Burgman Street with the same reliable Suzuki Access' engine. This 124cc air-cooled, single cylinder unit makes 8.7PS of power at 7000rpm and 10.2Nm of torque at 5000rpm. We found this engine to be brisk and easy in terms of acceleration. It also packs a good mid-range that can be a boon in traffic.

Last but not the least, the winner of our comparison test against the Access 125, the Honda Grazia packs the same 124.9cc engine that we have seen on the Honda Activa 125. This air-cooled, single-cylinder mill delivers 8.5PS of peak power at 6500rpm and 10.5Nm of torque at 5000rpm. Just as expected, this engine packs the same refinement and responsiveness of power delivery from low to mid-range as seen on the Honda Activa 125.

To take the fight head-on against its competition, TVS has packed the Ntorq 125 with tons of features. For starters, its fully digital instrument console boasts of 55 features, including navigation assist, lap timer, engine oil temperature, top speed recorder, last park location assist, service reminder, incoming call alert, incoming message alert, miss call alert and more! In addition to this the scooter also gets LED DRLs, an external fuel filler cap and a USB phone charger. However, we feel that the addition of LED headlamps could've further cemented its position against the competition.

The Suzuki Burgman Street packs a split LED headlamp unit upfront. Along with it, the scooter packs the same digital instrument cluster seen on the Suzuki Gixxer as well. As is typical of maxi-scooters, the console is bolted on to the body and in between the between the handlebar and the large windscreen. The scooter also gets a 12V DC outlet for charging electronics in its lower storage.

The Aprilia SR 125 may seem to be lacking on the features front. However, according to the company, the scooter will come with Bluetooth connectivity in the near future that will help riders access vehicle diagnostics through an app. In addition to this, riders will also be able to send out alerts in case of an emergency and access navigation apps to locate service stations, petrol pumps and Aprilia showrooms and service centres. But for now, the scooter is as barebones in terms of features as the SR 150.

The Honda Grazia, on the other hand, was the first scooter in the segment to get LED headlamps, with clear lens indicators on either side. It also gets an all-digital instrument console with a speedometer and tachometer placed on top. The second, smaller, red-backlit LCD panel underneath displays other information such as time, fuel gauge, odometer and trip meter. To further add to the practicality front, Honda has added an additional storage compartment behind the front apron. It houses a charging socket that helps in charging your phone on the go.

Suspension duties on the TVS are handled by telescopic forks at the front and twin gas-charged shock absorbers at the rear. Braking is done with the help of a front 220mm disc and a rear 130mm drum brake. TVS has equipped the Ntorq 125 with 12-inch wheels on both sides. It also packs a 5.0-litre fuel tank. The scooter tips the scale at 116.1kg (kerb).

Aprilia has equipped the SR 125 with 32mm telescopic forks at the front and a monoshock unit at the rear. Braking duties are handled by a 220mm disc at the front and a 240mm drum unit at the rear. The SR 125 packs the same segment-leading 14-inch wheels, which is sure to make riding around corners more fun. The scooter packs a 6.5-litre fuel tank.

Just like the Activa 125, the Honda Grazia too gets telescopic forks at the front and a monoshock unit at the rear. Braking is done via an optional 190mm disc at the front and a 130mm drum unit at the back. As a norm, the Grazia too gets Honda's CBS technology, which will aid both seasoned and new riders in case of emergency braking. The Grazia gets a large 12-inch wheel up front and a smaller 10-inch one at the back, shod with either Ceat or MRF Tyres. Fuel tank capacity stands at 5.3 litres, and the Grazia is a kilo lighter than the Honda Activa 125, which weighs 108kg for the high-end Deluxe variant.

Considering the price point and the combination of features and performance on offer, the Ntorq comes across as the ideal value for money scooter here. It is not only tech-laden but packs in strong power figures too. The Aprilia SR 125 offers sporty design and a performance-oriented engine but the lack of features that is in stark contrast to its high price point makes it lose some brownie points.Both the scooter are sure to attract more young buyers in their own rights.

On the other hand, the Suzuki Burgman Street is a scaled down version of a maxi scooter and should appeal to those looking for outright comfort. However, if you want a no-nonsense scooter that can do a bit of everything, the Grazia is your answer.