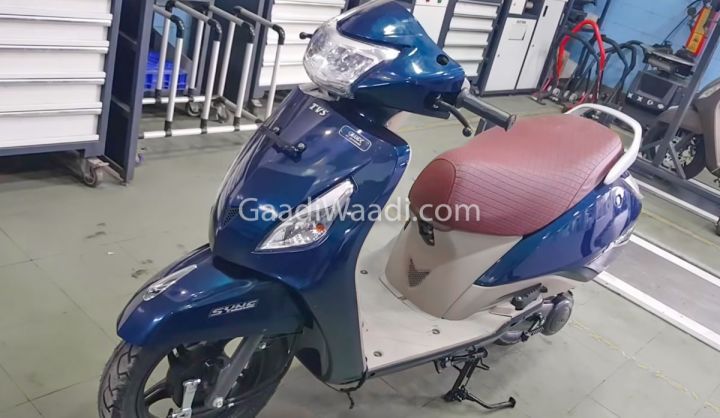 The TVS Jupiter Grande variant has been spotted in what looks like a TVS R&D centre. The uncamouflaged scooter is draped in a new metallic blue colour scheme and bears a ‘Grande’ sticker on the front apron. There’s a chrome strip on the front fender too, a la the Classic Edition. The interior panels are finished in beige, similar to the ZX variant, while the seat cover is a premium unit with diamond stitching, which is unseen in the variants currently available. The lack of a front disc brake suggests the scooter will be priced at a slight premium over the ZX variant, which retails for Rs 54,436, ex-showroom Delhi.

The headlamp unit seems to be LED, while the instrument cluster gets a digital inset as well. The inset displays a fuel gauge, clock and trip meter readouts. There’s a low fuel light, Eco and Power lights too, apart from the high-beam and indicator tell-tale lights. Mechanically, the scooter is expected to remain unchanged. Drawing power from a 109.7cc single-cylinder air-cooled engine, the scooter comes with a CVT gearbox. The engine is good for 7.99PS at 7500rpm and 8Nm at 5500rpm. 30mm telescopic front forks and a gas-charged rear monoshock suspend the underbone frame. Brakes include 130mm drum units on both ends with Sync Brake System (SBS).

Expect TVS to launch the scooter this festive season. When launched, it will rival the Honda Activa 5G DLX variant, which is priced at Rs 55,430. Other notable rivals include the Yamaha Alpha disc brake version, which retails at Rs 55,130, and the Hero Maestro Edge Dual Tone colour variant, which costs Rs 51,300 (all prices, ex-showroom Delhi).