The Bonneville Speedmaster looks promising, but is it better than its competition? 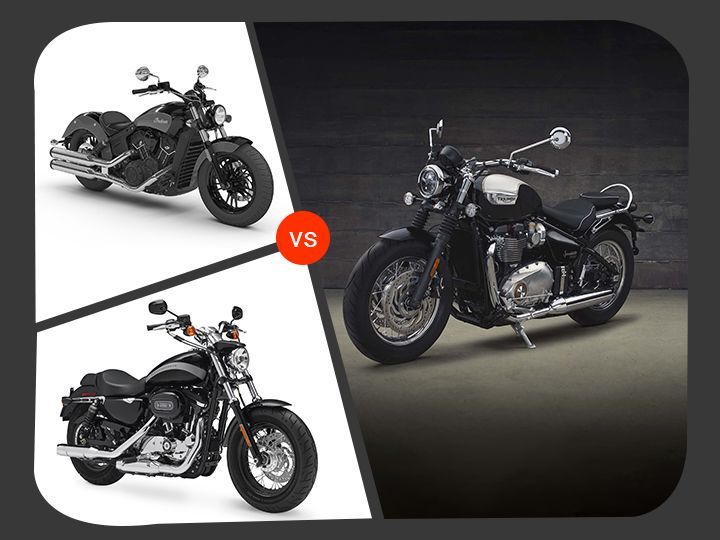 The Triumph Bonneville Speedmaster is the British motorcycle manufacturer’s latest offering in the cruiser segment. Based on the gorgeous Bonneville Bobber, the Speedmaster goes up against established rivals like the Indian Scout Sixty and the Harley-Davidson Sportster 1200 Custom. So how does it fare against them? Let’s find out.

Like the Bonneville Bobber, the Speedmaster too features the liquid-cooled, 1200cc parallel-twin engine that produces 77PS of power and 106Nm of torque at 4000rpm. This engine is paired to a 6-speed gearbox. The Indian Scout Sixty packs a liquid-cooled, 999cc V-Twin engine that is mated to a 5-speed gearbox. This motor develops 78PS of power and 88Nm of peak torque at 5000rpm. Harley-Davidson doesn’t reveal power figures of their bikes. However, we know that the Sportster 1200 Custom’s air-cooled, 1202cc Evolution engine produces 97Nm of peak torque at 4250rpm. The Harley-Davidson too gets a 5-speed gearbox.

It is clearly evident that the Triumph is the torquiest motorcycle of the lot. Although all three bikes are on par in terms of their power output, the Triumph’s 6-speed gearbox should help it improve its cruising ability on the highway.

The Triumph Bonneville Speedmaster gets LED headlamps with DRLs at the front and LED tail lamps at the rear. The instrument panel consists of an analogue speedometer and multi-function LCD screen which displays info like the odometer, a trip meter, gear position indicator, fuel gauge, a distance-to-empty indicator, a service indicator, a clock, current and average fuel consumption, display and traction control settings. The screen is controlled by a scroll button mounted on the handlebar. There are two riding modes to choose from - Road and Rain. You also get ride-by-wire technology for an enhanced throttle response. It is also the only bike here to feature cruise control. To help you in cold weather, you also get heated grips as an optional extra.

The Indian Scout Sixty has an old-school charm but does not offer features that a motorcycle at this price point deserves. Even the instrument cluster is bereft of any fancy wizardry. It consists of a speedometer, an odometer, a low fuel light, and an engine temperature display. The Scout Sixty gets ABS as standard but no traction control.

The Harley-Davidson Sportster 1200 Custom is equipped with a handlebar-mounted instrument cluster which features a speedometer, an odometer, a clock, dual trip meters, a low fuel and oil pressure indicator, an engine diagnostic readout, and LED indicator lights. It does miss out on a fuel gauge, a huge miss for a serious cruiser. Unlike the 2017 model, the 2018 version gets ABS as standard here.

In terms of weight, the Triumph Bonneville Speedmaster takes the middle ground with a dry weight of 245.5kg. This cruiser gets a low seat height of 705mm, which is decent enough for Indian riders. However, it does lag behind in terms of fuel capacity with a 12-litre fuel tank. This means you’ll have to make for stops for fuel while out on a long ride. The Speedmaster utilises KYB 41mm forks with cartridge dampings offering 90mm of travel at the front. At the rear, you get KYB monoshock with linkage and stepped preload adjuster and offers 73.3mm of wheel travel. Braking duties are handled by twin 310mm disc with two-piston callipers at the front and a single 233mm disc at the rear.

The Harley-Davidson Sportster 1200 Custom is the heaviest of the bunch at 255kg (dry). It has a relatively higher seat height of 725mm. But the Harley-Davidson offers a 17-litre fuel tank, the largest among the trio, a major advantage when it comes to non-stop cruising. The 1200 Custom uses telescopic forks at the front and a twin shock setup at the rear. In terms of stopping power, the Harley gets dual-piston brakes on both ends.

The Triumph Bonneville Speedmaster is estimated to be priced at Rs 11 lakh. The Harley-Davidson Sportster 1200 Custom is priced at Rs 9.75 lakh (ex-showroom Delhi). The Indian Scout Sixty will set you back by Rs 11.99 lakh (ex-showroom Delhi). The Harley-Davidson Sportster is clearly the most affordable one here but the missing fuel gauge is a bit of a bother. The Triumph Bonneville Speedmaster is expected to cost more than the Harley.

For the extra dough, you get features like cruise control, traction control, two riding modes, and an LCD unit which displays all the necessary information you could ask for. The Scout Sixty, despite being the more expensive thanks to it being a CBU, offers a lower displacement engine, lower torque and almost no features. The Triumph Bonneville Speedmaster is the clear winner here with a torquey engine and class-leading features. The British cruiser is expected to be launched at the 2018 Auto Expo.