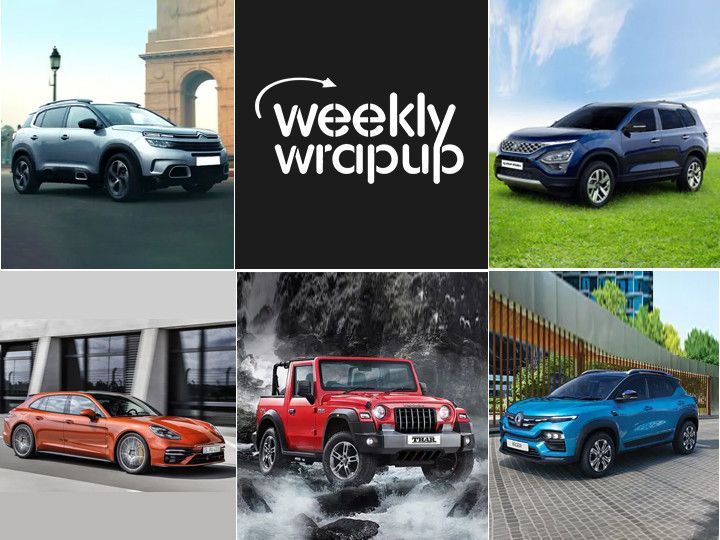 Thanks to updates from all around the world, we have been on our toes since the past seven days. A popular French carmaker made their India debut with a premium midsize SUV, while we saw a new launch from a sports car manufacturer from Stuttgart. We also have key updates from our homegrown carmakers: Tata and Mahindra.

The highlight over the past seven days was the roll out of the Union Budget. While we expected to see a drop in taxes on automobiles, the finance minister, Nirmala Sitharaman, had made announcements that could promote Athmanirbar. The vehicle scrappage policy was also introduced. Details here.

After a long delay, the wraps are finally off the C5 Aircross, Citroen’s debut model for India. The SUV will be available in two variants and provided with a 2.0-litre diesel engine. The SUV will take on the Jeep Compass’s range-topping Model S and the upcoming facelifted VW Tiguan. More details here.

The new Tata Safari is a three-row derivative of the Harrier. Sure, it lacks an all-wheel drivetrain, but it is the SUV’s most feature-loaded and advanced version ever. Prices to be revealed on…. click here.

Porsche has brought the facelifted Panamera to India. While cosmetic updates are minor, the carmaker hasn’t skimped on performance, bringing  two spicy new variants to our shores. Details here.

Most Renault dealers across India have begun accepting bookings for the new Kiger sub-4 metre SUV ahead of its launch in March. In fact, a select few have even started receiving the SUV for display. City-wise booking amounts here.

Mahindra is in the spotlight for its spy shots yet again. This time, it’s the new Bolero Neo, which is essentially the facelifted TUV300. We also have important updates regarding the XUV300 and the new Thar. Check out in detail by clicking these links: