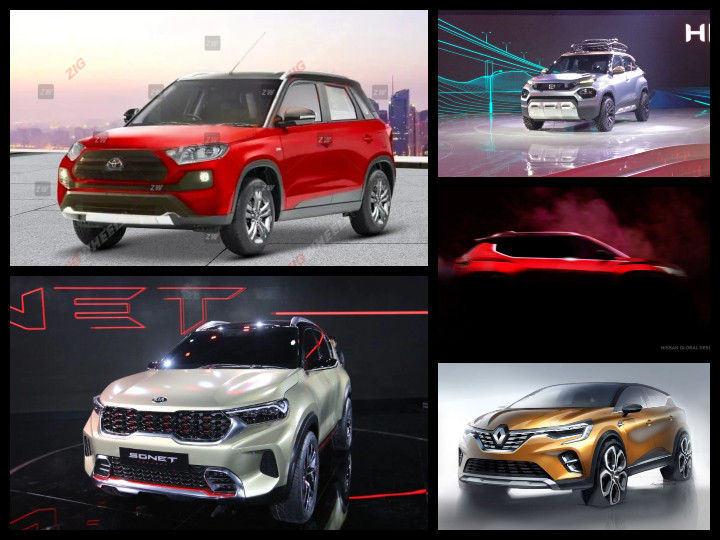 With their compact footprint and SUV styling, sub 4-metre SUVs have been a hit amongst Indian car buyers. The Ford EcoSport, with its SUV silhouette and feature loaded cabin, was the one that pioneered this segment and soon most major manufacturers followed suit. Now, even more are set to enter the fray. So here’s a list of five sub 4-metre SUVs you could wait for:

Kia Sonet: Expect it to be a value-packed, feature-rich package

One of the most anticipated models this year, the Sonet could hit a hat-trick for Kia Motors India. We saw the near-production concept at Auto Expo 2020 and came away impressed. The Sonet will come loaded with features like a 10.25-inch infotainment system, connected car technology and a Bose sound system, and it’s likely to be offered with three engine options. More details here.

Nissan’s Sub 4-metre SUV: Likely to be the most affordable in its class with premium features

This is one SUV that could put Nissan back on the map. The design sketch of the sub 4-metre SUV suggests that it could like a smaller version of the Kicks. Further, the carmaker could christen the upcoming SUV as the Magnite. Technical aspects of the upcoming SUV are yet to be revealed. However, we expect it to be powered by a new 1.0-litre turbo-petrol engine that will get an automatic transmission option as well.

Yes, we were a bit disappointed by the Renault HBC absence at Auto Expo 2020. However, we did manage to get a glimpse of the SUV through spy shots. First impressions suggest that it could look like a larger version of the Kwid. Details about the HBC are scarce at the moment. We expect it to be powered by a 1.0-litre turbo-petrol engine which could be paired with manual and automatic transmission options.

The Tata HBX is a micro SUV which sits below the Nexon sub 4-metre SUV. It will go up against the Maruti Suzuki Ignis and Mahindra KUV100 Nxt. The HBX holds the advantage of looking like a proper SUV over its crossover rivals. It is expected to come with a well appointed interior that could takes cues from premium Tata cars like the Altroz. The HBX will be offered as a petrol-only model, with an electric version on the cards. More details here.

The Toyota Urban Cruiser will essentially be a rebadged Maruti Suzuki Vitara Brezza. It will be the second model to be shared between Suzuki and Toyota after the Baleno. Like the Glanza, the Urban Cruiser could look identical to its Maruti counterpart. It’ll be powered by Maruti’s 1.5-litre petrol engine that develops 105PS and 138Nm coupled to a mild-hybrid system as seen on the facelifted Brezza. More details here.

These are the five sub 4-metre SUVs that are expected to hit our roads soon after the coronavirus lockdown. Which SUV are you waiting for? Let us know in the comments section below.