WTH: This KTM 1290 SuperDuke ATV Is A Fun Way To Rip Through Your Farm

This four-wheeled monster is a good tool to terrorise both your neighbours and their sheep! 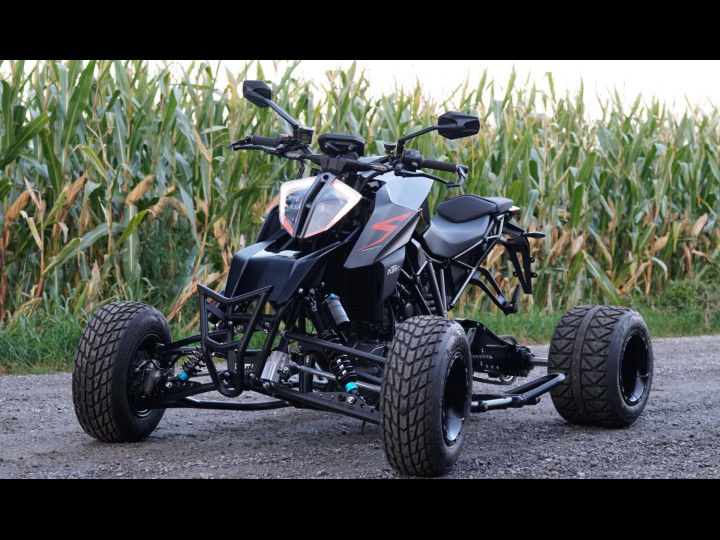 Bar conversations are fun. You have a pint or two with your mates and drum up visions of what you could do if you put your minds into it. We believe one such conversation over lots of alcohol could have led to the birth of this unholy creation, 1290 SD-R, a KTM 1290 SuperDuke-based all-terrain quad bike.

The folks over at E-ATV Racing started off building KTM-powered ATVs. The brand has various models based on the 690 Duke, 990 Duke, and 1190 RC8. However, the E.-ATV 1290 SD-R is hands down their most manic creation yet.

What you essentially get is a super quad belting out 177PS and capable of accelerating to 100kmph in less than 3 seconds! The acceleration must be insane owing to the small wheels. A brave soul even managed to reach 218kmph in this! Imagine the windblast at that speed.

It has a 23-litre fuel tank so you might just run out of courage before you run out of fuel.

Thankfully, this isn't a yard-built patch job. Apart from the motorcycle itself, the ATV frame is built of chrome-moly tubes. The front suspension is connected to the frame via CNC milled powder-coated aluminium components. It uses two adjustable TFX shock absorbers up front and a WP monoshock at the back. Braking is via Brembo discs with combined-ABS from Bosch. It weighs just 238kg, so expect mind-numbing performance figures.