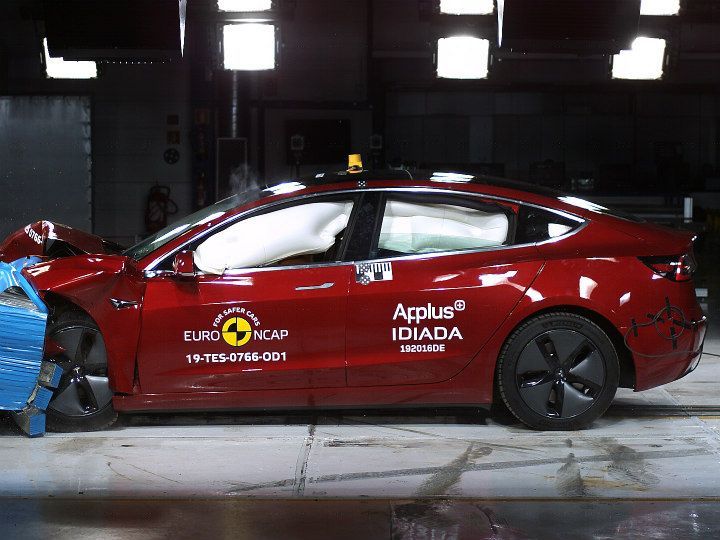 The Tesla Model 3 has joined an exclusive club of the safest vehicles on sale in Europe after scoring a 5-star Euro NCAP (European New Car Assessment Programme) safety rating. Euro-NCAP conducts some of the most stringent safety tests in the world and the entry-level Tesla sedan has aced it.

It  also scored one of the best Safety Assist scores seen to date at 94 per cent thanks to its various advanced driver assistance systems. The array of active safety technology offered on the Tesla Model 3 include lane keeping, autonomous emergency braking and speed limit assist as well as Level 3 autonomous driving mode. Another major highlight of the test is that the electric saloon got a perfect score in the frontal offset deformable barrier crash test, which has been an important section of Euro NCAP tests since its creation in 1997.

Going further, the Model 3 scored an impressive 96 per cent in the adult protection category, 86 per cent in child protection category and 74 per cent for pedestrian safety. The pedestrian protection test involves firing a half-bowling ball like projectile, intended to simulate a pedestrian’s head, into the windshield at 40kmph and then examining how the vehicle absorbs the energy of the impact. Tesla has had a great track record in terms of safety, and the Model 3 has improved upon that further.

Much of the credit goes to the car's chassis layout and the lack of a combustion engine. The latter makes the front of the car an effective crumple zone, while the skateboard like chassis lowers the centre of gravity, reducing the risk of a rollover.

The Tesla Model 3 comes with two battery pack options - 50kWh and 75kWh. The smaller unit gives it 350km of range on a full charge. It lets the Model 3 accelerate from 0-100kmph in 5.6 seconds and achieve a top speed of 210kmph. With a supercharger installed, the battery can be juiced up to give a range of 210km in about 30 minutes. From a standard home charging socket, an average of 48km of range is added for every hour of charging. The 75kWh battery pack can power the Model 3 for 500km on a single charge, complete 0-100kmph in 5.1 seconds and reach a top speed of 225kmph. Supercharging and standard home charging times are a claimed 270km in 30 minutes and 60km every hour, respectively.

This bodes well for anyone eyeing a practical all-electric sedan. Like other Tesla models, the Model 3 doesn’t have any direct rivals. However, it is comparable to the Mercedes-Benz C-Class, BMW 3 Series, Volvo S60, Jaguar XE and the Audi A4 in terms of size.