Tata Motors At Auto Expo 2020: A Quick Round Up 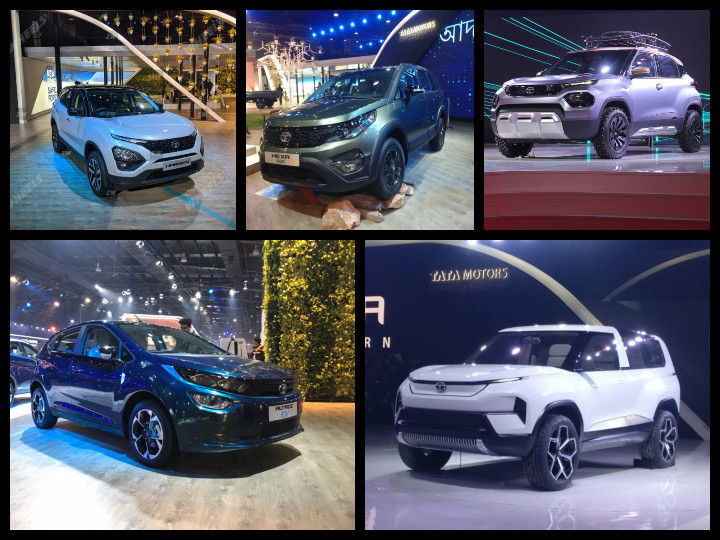 Tata Motors surprised us by introducing the Sierra as an electric concept SUV. Yes, the Sierra could make a comeback and the Indian manufacturer will take a call on whether to launch the SUV or not after conducting a feasibility study. If launched, the Sierra will most probably slot between the Harrier and Gravitas. In terms of design, the Sierra takes us through memory lane thanks to its evolutionary design. Have a closer look at the iconic SUV in our detailed image gallery.

The Tata HBX is essentially a close-to-production version of the H2X concept micro-SUV that made its debut at the 2019 Geneva Motor Show. It borrows styling cues from the premium Harrier and the recently launched Nexon BS6. Inside, the HBX’s cabin looks familiar as it borrows plenty of components from the Altroz. Speaking of which, the HBX is based on the Altroz’ ALFA Arc platform and will utilise its BS6-compliant 1.2-litre petrol powertrain as well. A diesel HBX is highly unlikely.

Tata Motors launched the 2020 Harrier at Auto Expo 2020. The main change lie under the hood as it comes with a powerful BS6-compliant 2.0-litre Multijet engine developing 170PS. It also debuts the long awaited 6-speed automatic gearbox. Cosmetic updates in the Harrier include new machine-finished 18-inch alloy wheels and a new red exterior shade. It also comes with new features like a panoramic sunroof, powered driver’s seats and an auto-dimming IRVM. Have all the upgrades made the Harrier out of reach? Find out here.

Tata Motors took the wraps off the production-spec Altroz EV at Auto Expo 2020. Just like the Nexon EV, the Altroz features plenty of blue inserts to denote its cleaner nature. Inside, the Altroz EV’s dashboard looks similar to the standard model, albeit with blue inserts. Powering the Altroz EV is Tata’s Ziptron powertrain. We expect the specifications to be similar to the recently launched Tata Nexon EV. Here’s a closer look at the upcoming electric hatchback.

These were the main highlights at Tata Motors’ pavilion. It also showcased the recently launched Nexon EV as well as the facelifted Nexon, Tiago and Tigor. Other highlights include the display of BS6 range of commercial vehicles and Tata’s Ultra T.7 electric truck. Which Tata vehicle caught your attention at Auto Expo 2020? Let us know in the comments section below.