Tata's new flagship, the Hexa has finally been launched with prices starting at Rs 11.99 lakh. We compare it to its two chief rivals, the Toyota Innova Crysta 2.4 and the Mahindra XUV500 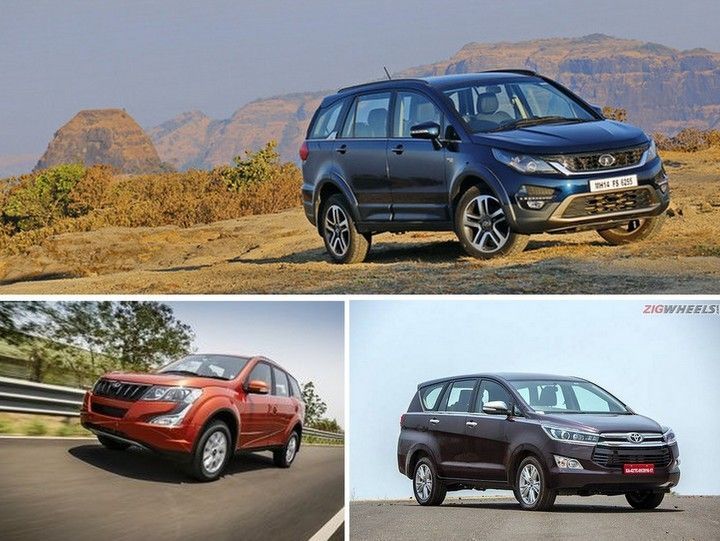 The Mahindra XUV500 marks its domain with its stylish SUV stance and optional all-wheel drive set-up. The Toyota Innova Crysta is an established utility vehicle that’s just as popular among private owners as it is among cab companies. The Tata Hexa blurs the line between the two categories by blending the best of both worlds. Its design and dimensions complement each other to liberate a tonne of cabin space. And the four-wheel drive set-up combined with the body-on frame architecture gives it the ‘go anywhere’ ability.
Let’s see how well it manages to punch two heavy hitters at the same time.

The Hexa is longer and wider than the XUV500 and the Crysta. It also has the longest wheelbase among the trio, and beats the Crysta’s by 100mm. All of these characteristics should liberate more space in the cabin, especially for taller occupants. And the third row should be quite spacious as well. The turning radius takes the biggest hit with big cars and the 5.75m rating reflects that. With a 200mm ground clearance, tackling even the tallest speed breakers should not be a problem.

The Hexa and the XUV500 come with a 2.2-litre engine, while the Innova Crysta packs a 2.4-litre unit. However, the Hexa manages to not only trump the XUV, but also the Crysta’s bigger engine with the best power and torque figures. The 156PS of power is marginally more than the Innova’s 150PS figure, but the 400Nm of torque is at a whole new level.

What also boosts its off-road credentials is the combination of a body-on-frame and the option of 4WD. The XUV500 is available with an AWD set-up, but its monocoque frame limits its off-roading capabilities. The Innova’s body-on-frame is also capable of handling a fair deal of abuse, but lack of a 4WD set-up means all that beating can only happen on tarmac.

The Innova is also the only vehicle here with a 5-speed manual transmission, while the Indian manufacturers offer a 6-speed gearbox.

The battle of the features starts off with the safety kit, and the Innova is quick to get off the mark by offering knee airbag for the driver as standard equipment. The XUV500 and Hexa don’t have it even as an option. However, the stopping power is stronger in the Indian offerings here, as they come with disc brakes on all four corners.

The XUV goes further and provides a Tyre Pressure Monitoring System (TPMS) and a cornering light, while Hexa gets a defogger for the outside rear-view mirror.

When it comes to comfort and convenience, the Hexa appears to be missing out on quite a bit of kit. There’s no power-adjustable driver seat, push button start, or rake adjustment for the steering, and the touchscreen is also smaller than the phones we carry in our pockets. It does make up for the tiny infotainment screen with the JBL-powered 10-speaker music system that can get the party started anywhere.

The XUV again presents a great case for itself by offering a power sunroof without making any glaring omissions in the features department.

The Tata Hexa skips a few features that the XUV500 comes with. Push-button start with passive keyless entry, telescopic steering and electronic seat adjustment are missing on the Hexa. The touchscreen infotainment system is also on the smaller side compared to the XUV and the Crysta. While its pricing is on the lower side, it's not too far from the XUV500. Though the Hexa does offer fantastic cabin space and a robust mechanical set-up.