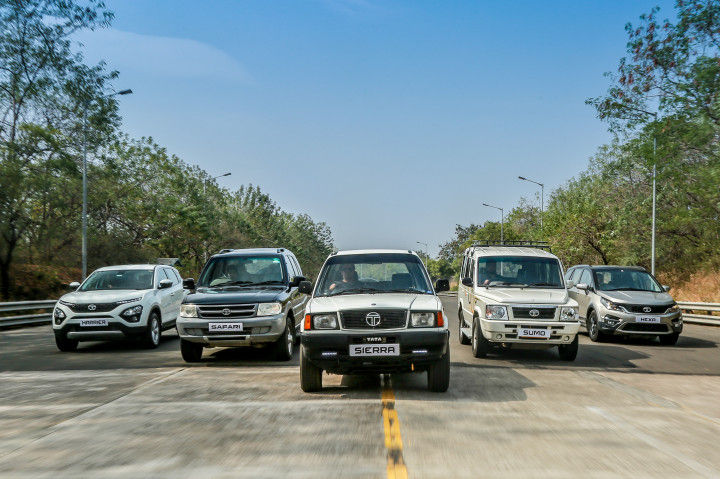 The Harrier, Tata Motors’ current flagship SUV, is based on a Land Rover platform, has butch looks, a modern cabin and excellent highway cruising abilities. In fact, in our books, the Harrier also looks and feels the most S-U-V in its segment. However, the Harrier stands to benefit with a few additions that would certainly make it feel like a more complete car. And for that purpose, its predecessors -- Sierra, Safari, Sumo and Hexa -- have some serious advice for Tata’s latest flagship.

Back in the day, Tata Motors or TELCO (Tata Engineering And Locomotive Company) was majorly known as a commercial vehicle maker. Despite the naysayers and apprehensions, Tata Motors went ahead and launched the Sierra!

Three-door cars are facing the grey sky in recent days. In today’s car-crazy world, most buyers would mock a three-door car and might refrain from it. But Tata dared to offer one in 1991 and believe me or not, it was quite popular. The Tata Sierra was a 3-door SUV based on the 207 commercial vehicle and utilised a Peugeot sourced 63PS 2.0-litre diesel engine. In fact, it even drove like the 207 pick-up truck. That said, the desirability level it had out of a scale of 10 was 100!

The Sierra’s main draw was its unique 3-door styling and feature-laded cabin. It packed a handful of modern features back in the day like a tilt-adjustable steering column, power steering and even power windows. Standard issue stuff today, but a B-I-G deal in the 90s. Yes, the Harrier also comes loaded with these features. But one place where the Sierra could inspire the Harrier is its with big rear alpine windows.

Well, we’re not asking for a 3-door Harrier or the Sierra’s alpine windows to be fitted on Tata’s new age flagship. But the Harrier could do with a massive panoramic sunroof. And, Tata Motors will soon introduce the much-loved feature in the 2020 Harrier BS6. Sunroof checked, what else could the Harrier pack in?

For that, we have to move to the SUV that the Harrier actually succeeded - the Safari. It was one car that set the base for the Indian manufacturer. In fact, the Safari had so much emotional appeal that many of my colleagues and I were in tears when Tata pulled the plug. How did the Safari manage to grab the hearts of Indian buyers?

Well, besides its butch styling and serious road presence, the Safari was unique in its appeal because of what it did for Indian buyers. In a sea of cars that were largely about affordable mobility, the Safari offered an adventurous lifestyle.  The high driving position with the bird’s eye view allowed you to dominate and bully everyone on the road. Corner carving was certainly not the Safari’s cup of tea, but the Safari was a great car on the highway and an able mile muncher. Tata also marketed the Safari aggressively with quirky ads that were way ahead of their time!. That said, there’s a little advice we’re sure the Safari would give the Harrier, and that’s to offer 4x4/AWD. The promise of Land Rover DNA doesn't feel complete without this option, does it?

However, most people prefer to drive their SUVs on-road rather than off-road. To make your on tarmac experience more convenient, the Hexa has some advice for the Harrier. The Hexa is essentially based on the Aria, a product that was immensely capable but failed to hit the nail hard amongst Indian people. But Tata Motors fixed all the negatives of the Aria and brought out the more complete Hexa. Tata Motors gave it a tinge of SUV despite its MPV-like silhouette, a huge thumbs up. Further, the Hexa is known for its comfortable seating position, a feature-rich cabin, and a good driving experience.

Speaking of which, the Hexa’s popularity really rose because of one single reason - its smooth-shifting 6-speed automatic gearbox. In fact, Tata cracked it with its first proper automatic car as it made the giant a breeze to drive in tight city confines. Yes, the Harrier should’ve also been offered with an automatic transmission from day one. However, going by the saying ‘better late than never’, the Tata Harrier BS6 has been teased with an automatic gearbox.

Before I pack up, there is another iconic SUV that would like to give advice to the Harrier - the Sumo. The Sumo was actually named after Sumanth Moolgaokar, known as the architect of Tata Motors. Mr Moolgaokar led Tata Motors for four decades and was awarded the Padma Bhushan in 1990.

Just like Mr Sumanth Moolgaokar, the Sumo is known for its hard-working nature. It’s a time tested workhorse and was initially developed for military and off-road purposes. In fact, visit the Himalayas or any hill station and you’ll see these plying as faithful cabbies. Its ability to seat 10 people and no-nonsense nature made the Sumo successful in the Indian market. Yes, there was a more modern and safer Sumo Grande for those who wanted a tinge of premiumness. But Indians were happy with the basic Sumo Gold, a model which shares its roots with the Tata 207 pick up.

Just like the Sumo, we wish the Harrier could also carry more than five people but in a safer and more comfortable manner. That will be addressed by the Harrier’s 7-seater cousin, the Gravitas, which is set to debut at Auto Expo 2020.

Yes, the Tata Harrier isn't the perfect car and there certainly is a lot of pressure on its shoulders, given the legacy of the SUVs that came before it. But we’re happy to see Tata Motors take feedback and improvise its flagship offering. It has recently teased the 2020 Harrier which packs in a panoramic sunroof, an automatic gearbox and a BS6-compliant engine. Further, an all-wheel drive variant is a possibility for the SUV as well. Clearly, Tata is taking their time and has been filling the Harrier’s holes with features its predecessors offered. While the current Harrier is impressive, we’re eagerly waiting to have a stint behind the wheel of its upgraded sibling!