The Switch eScrambler Is The Embodiment Of No-nonsense Minimalism 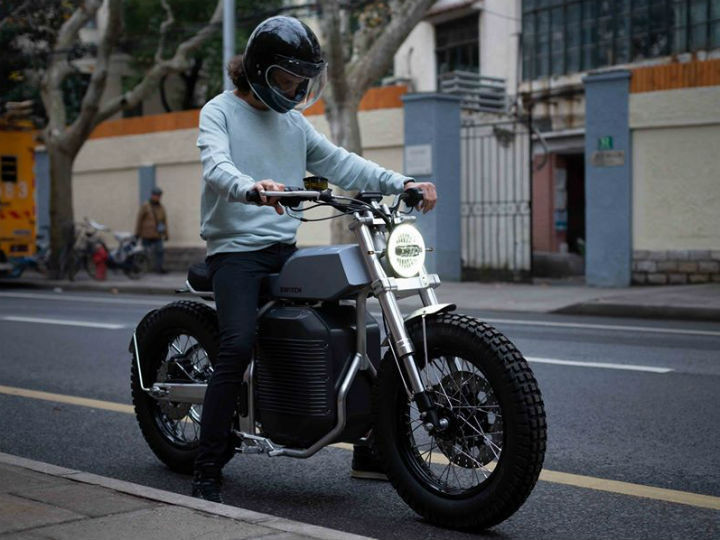 Since there's no internal combustion engine in an electric bike, it leaves for a huge scope of playing around with the design. Shanghai-based electric startup Switch Motorcycles seems to have gone the ‘minimalism’ route with its recently unveiled eScrambler prototype. The production version is planned to be launched in 2022.

This eScrambler almost looks like it has been designed around the battery pack. The 11kWh lithium-ion battery pack sits inside a double-cradle frame and is linked to a powerful 50kW electric motor located near the swingarm pivot. The electric motor and the swingarm pivot are coaxial, so this ensures the tension of the belt drive remains the same irrespective of the swingarm movement. The motorcycle is claimed to accelerate from 0-100kmph in 3.2 seconds and onto a top speed of 150kmph. There are three riding modes, and cruise control is standard.

The bike rides on 18-inch aluminium spoke rims wrapped with fat block-pattern tyres. There’s an inverted front fork and a rear monoshock to take care of road undulations. Brakes include discs on both ends from J.Juan. The startup is currently working on developing a Bosch ABS system for the motorcycle.

A closer look at the motorcycle will make you realise there’s barely any wiring visible. That’s because all the electronics including the controller are housed inside the faux fuel tank. The fuel tank also exudes a bit of conventionalism, contrasting the contemporary, minimalistic design lines on the rest of the motorcycle.

It also gets all sorts of modern gizmos like WiFi connectivity, GPS tracking, LCD instrument cluster, sleek, all-LED lighting system and even a USB charging port.

Overall, the Switch eScrambler seems to have a great balance of minimalistic design tempered with tech-laden features and a powerful motor. And with all these aspects, it is expected to command premium pricing. We’ll get to know more details about this electric motorcycle in the months to come, so stay tuned.