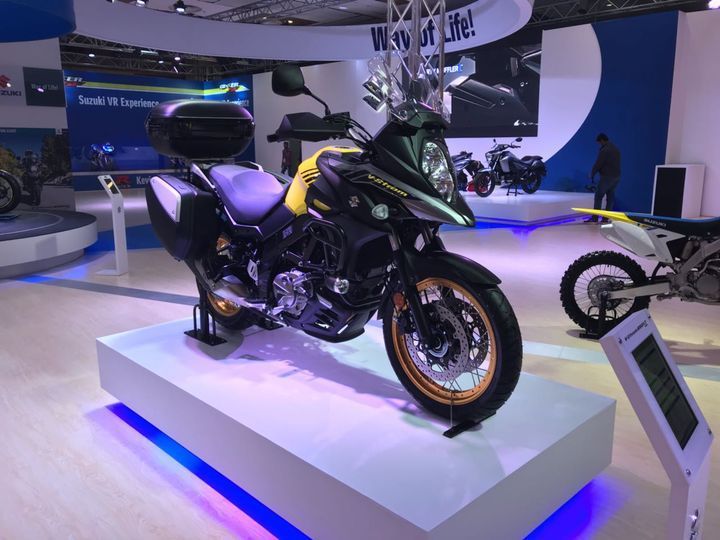 Suzuki has unveiled the V-Strom 650XT here at the Auto Expo 2018. The adventure tourer motorcycle has been immensely popular internationally and the company aims to achieve the same kind of engagement levels from India as well. However, while Suzuki hasn't given out many details about when it would go on sale here, we hope to see it showrooms by the end of 2018.

In terms of design, the Suzuki V-Strom 650XT shares a lot with its elder sibling, the V-Strom 1000. Internationally, the motorcycle is available in two variants - the standard V-Strom 650 and the V-Strom 650XT. The standard V-Strom gets slightly lighter cast aluminium wheels with Bridgestone Battle Wing Tyres while the more hardcore 650XT seen here gets aluminium rims with stainless-steel wire spokes and tubeless Bridgestone Battlax Adventure tyres.

Powering the motorcycle is a 645cc, liquid-cooled, four-stroke V-twin engine that is mated to a six-speed gearbox. Peak power output of 71PS is produced at 8800rpm and 62.3Nm of torque comes in at 6500rpm.

Suspension duties here are handled by 43mm telescopic forks up front that offers 150mm of travel, while the rear gets a monoshock with adjustable rebound and preload. Braking is taken care of by ABS-assisted 310mm front discs and a 260mm rear disc.

Along with the Suzuki GSX-S750, Suzuki is planning to get the V-Strom 650XT to India via the CKD route as well. However, it is currently in the works to revamp their assembly line since it's designed to cater to only one product, the Suzuki Hayabusa.

We are hoping to see the new middle-weight adventure bike on our roads in some time next year. Once launched, the Suzuki V-Strom 650XT is expected to be priced at around Rs 6-7 lakh (ex-showroom). The Suzuki V-Strom 650XT will also receive some strong competition from the Kawasaki Versys 650 and the upcoming Benelli TRK 502.