These two-wheelers from the 2018 Auto Expo caught our attention and won over our hearts! 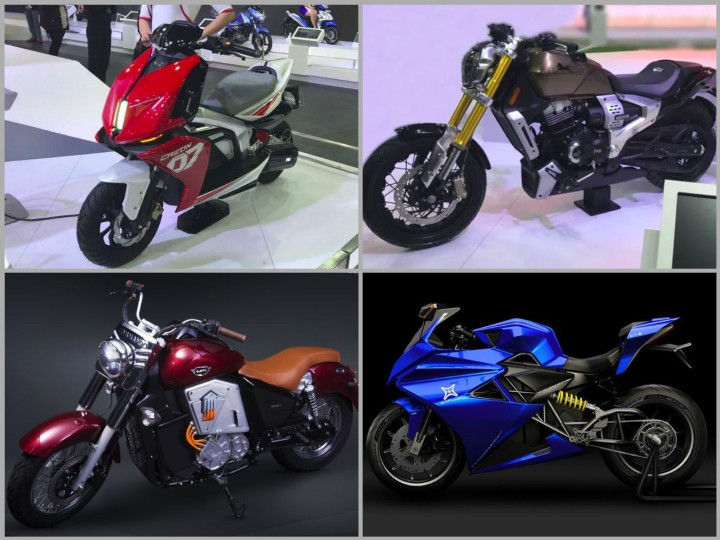 The 2018 Auto Expo was a mixed bag of surprises. We got to see a range of eclectic electric motorcycles apart from premium big bikes and small-capacity two-wheelers. Of all those, here are the top five that really caught our attention:

Bengaluru-based startup Emflux created shockwaves with its unveiling of India’s first electric sportsbike, the Emflux Model One. This fully faired e-bike was capable of sprinting from zero to 100kmph in just three seconds and onto an equally impressive top speed of 200kmph. The motorcycle was powered by an AC induction electric motor which pushed out 68PS and 84Nm. Emflux claimed its Samsung-developed lithium-ion battery pack can offer a range of 200km and was capable of charging up to 80 per cent in just a little over half an hour.

The bike was planned to be launched in the following year, 2019, but it did not pan out. Emflux was rather silent until recently in August this year, when it released a teaser image hinting at the launch of not one but two electric motorcycles. Fingers crossed, we hope Emflux launches the upcoming motorcycles at the 2020 Auto Expo.

Another electric motorcycle that really turned heads was the UM Renegade Thor. This electric cruiser debuted at the 2017 EICMA and was showcased at the 2018 Auto Expo. Like the Emflux Model One, this cruiser too had remarkable performance figures. Its electric motor produced 40.7PS of power and a massive 70Nm of torque, along with a claimed top speed of 180kmph. The electric motor was mated to a 5-speed transmission linked to a final chain drive.

The typical swanky cruiser chassis housed a large lithium polymer battery pack which was capable of delivering 270km on a full charge and could charge up to 80 per cent in 40 minutes using a fast charger.

Interestingly, this motorcycle was priced at Rs 9.9 lakh (ex-showroom) and UM said it will produce a made-in-India Thor with a range of 71km at Rs 4.9 lakh. However, this plan didn’t pan out, and even the brand recently made an abrupt exit from the Indian market leaving both dealers and customers high and dry.

The TVS Zeppelin is the Hosur-based brand’s first cruiser and its production version is likely to be launched early next year. This concept cruiser featured a unique mild-hybrid system called E-Boost.

This supplements the 220cc fuel-injected motor by giving it a small boost of torque whenever necessary. The petrol-powered engine alone was capable of producing 20PS and 18.5Nm, which is similar to the Apache RTR 200 4V’s numbers. Expect TVS to price the production version of this cruiser under Rs 2 lakh (ex-showroom).

The TVS Creon with its contemporary design lines and sporty colours made it look like it was straight out of science fiction. It featured an aluminium twin spar frame as opposed to the underbone chassis generally used in scooters. The electric motor was good for 16PS of power and it could accelerate from zero to 60kmph at an impressive 5.1 seconds.

TVS is unlikely to launch the production version of this scooter anytime soon. That said, we might see something electric (figuratively and metaphorically) in the future. Will it be a dialled-down scooter like the Chetak electric or will it be something sporty like the Ather 450? Only time will tell.

Kawasaki’s supercharged madness never fails to excite us. After the Japanese brand gave us the formidable H2 and the downright rabid H2R, the brand then went on to launch the H2SX sports tourer at last year’s auto expo. This motorcycle features the same engine as the H2 but it has been tuned to offer a more linear touring-friendly power delivery. But make no mistake, it still makes a hair-raising 200PS of power and 137.3Nm of torque.

Kawasaki retails this motorcycle at Rs 22.89 lakh. The brand also offers a more premium SE variant at Rs 29.19 lakh (both ex-showroom India), which gets even fancier bits like a TFT screen, launch control and a bidirectional quickshifter.