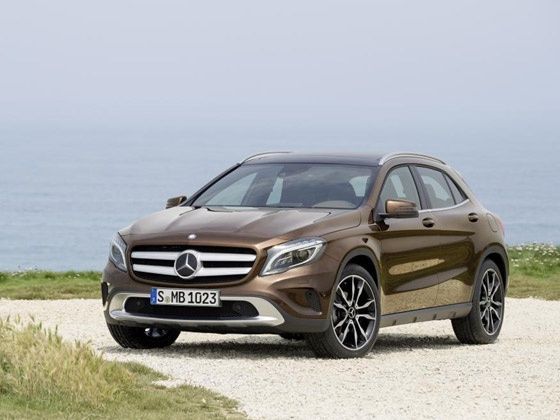 Mercedes-Benz is by far the oldest premium car manufacture to have its presences in India. And though it may seem to have gone a bit astray in the past, the German luxury car brand is back on the right track in our country. After launching a slew of impressive new cars like the all-new Mercedes-Benz S-Class, new Mercedes-Benz ML, an impressive range of AMG models including the just launched Mercedes-Benz CLA45 AMG, the car maker is now about to make its debut in the country’s compact SUV segment this October.
According to a company insider the next big model to be launched in India is the Mercedes-Benz GLA compact SUV, which will be pitted against the Audi Q3 and BMW X1. And since the other two German luxury car brands already have a first mover’s advantage, being on sale in India for quite a while now, Mercedes-Benz is ensuring that it offers an attractive package with the new Mercedes-Benz GLA. Mercedes is aiming to quickly make up lost ground and give its competition some serious challenge. So the compact SUV will come with smart coupe-like exterior design, delicately done interiors and most importantly strong petrol and diesel engine options.

Sources have confirmed that the petrol option will be the GLA200 CGi version with a very refined 1.6-litre, 4-cylinder, turbocharged, direct injection engine capable of 156PS peak power and 250Nm of maximum torque. Claimed 0-100kmph figure is said to be about 8.9-seconds with a top speed of 205kmph.

Diesel loving Indian will be offered the GLA200 CDi, packed with a new 2.1-litre, 4-cylinder, turbocharged oil-burner. The motor will be capable to churn out 136PS of peak power and a strong 300Nm of maximum torque and would be good for 0-100 time of a respectable 10 seconds, with limited top speed of 205kmph. Both the petrol and diesel engines will be mated to a familiar 7G-DCT automatic transmission with a dual clutch setup.

Our source has revealed that the company has almost finalised the launch dates of the new Mercedes-Benz GLA and is looking at introducing it in India in the month of October, just around the festive season. This will hopefully give a flying start to the Mercedes-Benz baby SUV in India. We expect the Mercedes-Benz GLA to be priced aggressively between Rs 25-35 lakh to make the competition feel the heat. Earlier, we had got exclusive shots of the GLA being tested in India, for more details click here: Mercedes-Benz GLA spied testing in India