The Renault Kiger SUV Looks Like A Triber On Steroids! 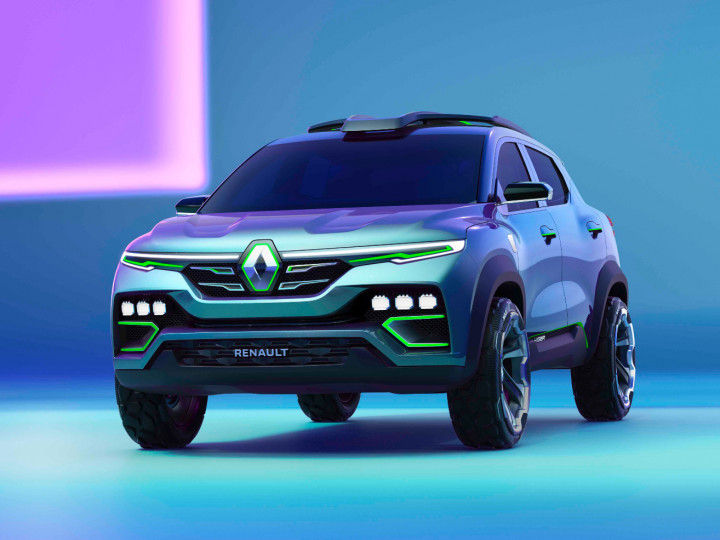 Renault has revealed the sub-4 metre SUV concept of its upcoming offering, the Kiger. The production-spec version of the sub-compact SUV will feature nearly 80 percent of the concept’s design cues when it’s launched in early-2021.

It is essentially a Nissan Magnite with a different set of clothes. The Kiger will mark the entry of the French carmaker into the hotly contested sub-4 metre SUV segment featuring the Kia Sonet, Hyundai Venue and Tata Nexon.

The Kiger is based on Renault’s low-cost CMF-A+ platform that underpins models such as the Triber and Magnite. We expect its dimensions to be similar to the Magnite -- 3,994mm long, 1,758mm wide, and 1,572mm tall with a 2,500mm long wheelbase. It could come with a roomy cabin, like the Magnite.

Technical details aside, what we are focusing on today is the Kiger’s exterior design. The concept is finished in a unique shade called Aurora Borealis, inspired by the Northern Lights, that changes between purple and blue hues depending on the light and angle you look at it from. Contrasting green elements add a dash of funkiness.

Since the Kiger is based on the Magnite, its silhouette looks similar to the Nissan with haunches above the squared wheel arches that are nicely filled by the 19-inch alloy wheels with grooved tyres. That said, the Renault SUV has received a major redesign at the front and rear.

The Renault Triber-like bold grille takes centre stage. It’s flanked by split-LED headlamps with the DRLs that are connected by the logo. The bumper looks muscular which is further aided by tough body cladding with green inserts. The roof rails feature a unique roof rack, hinting that the production model could get a usable one that could hold 50kgs, like the Triber or even the Magnite. The rear-end features C-shaped LED tail lamps and a butch bumper with green inserts. The show car has a ground clearance of 210mm.

While Renault has done a good job of differentiating the Kiger from the Magnite, it somewhat looks like a Triber on steroids. We have been seeing the Kiger testing for a while now and the pre-production test mules look similar to the concept. Take a closer look by clicking here.

The Kiger’s interior is yet to be revealed, but it’s likely to borrow bits from its Nissan sibling. The feature list is also likely to be similar to the Magnite with highlights being an 8-inch touchscreen infotainment system with Apple CarPlay and Android Auto, connected car tech, cruise control, a digital instrument display, steering-mounted audio controls, and keyless entry with push-button start. Safety will be covered by up to four airbags, ABS with EBD, parking sensors, a parking camera, and electronic stability control.

The Kiger’s engine options have been previewed by the Magnite. Nissan’s new 1.0-litre turbo-petrol that develops 100PS and 160Nm (152Nm in CVT) will be offered here. The Triber’s 72PS 1.0-litre naturally aspirated petrol engine will also be on offer for those who want something affordable. A 5-speed manual gearbox will come as standard while the CVT will be available with the turbo-petrol engine. That said, Renault could offer the 5-speed AMT in the naturally aspirated motor for those who want an automatic in the base engine.

The Renault Kiger will go on sale in early-2021, possibly by March. It's likely to be priced similar to the Magnite with a starting price of around Rs 5.50 lakh. The Kiger will be introduced in other foriegn markets after its India debut. The Renault won't have it easy in the segment as it fights out with biggies such as the Kia Sonet, Tata Nexon, Ford EcoSport , Maruti Suzuki Vitara Brezza , and Hyundai Venue. But if priced right, Renault could have a winner on its hands.