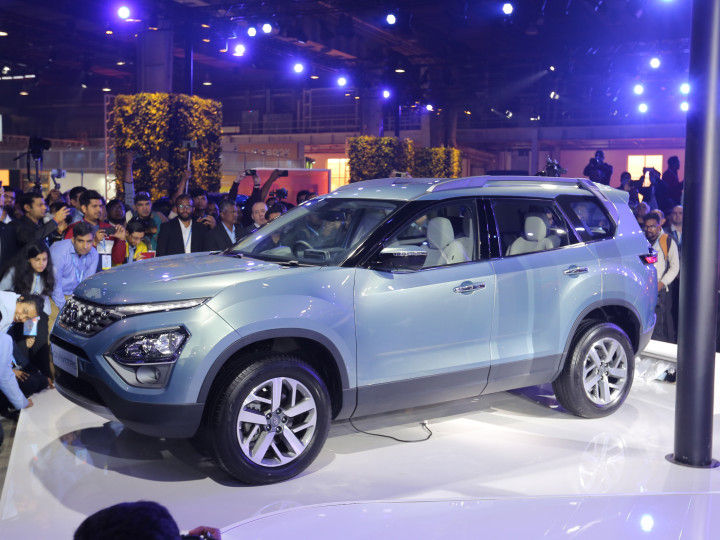 A production-spec Tata Gravitas has been spotted undisguised in the country. The 7-seater SUV, based on the Harrier, made its India debut at the Auto Expo 2020. It is expected to be launched in January 2021.

The Gravitas seen here is finished in dark blue, a shade that’s not on offer with the Harrier. The rear-end looks different from the Harrier thanks to the third row bench. It gets an upright tail gate and a stepped roof to liberate more headroom for third row occupants. Just like the MG Hector Plus, Tata could offer the Gravitas either as a 6-seater with captain seats or a 7-seater with bench seats.

While the dashboard layout is similar to the Harrier, the Gravitas utilises a lighter black-beige colour scheme that looks more premium and aids in an airier cabin. It also comes with an electronic parking brake with auto hold function, a feature that’s missing in the Harrier, as seen on one of the test mules.

The rest of the feature list is expected to be similar to the 5-seater SUV. It comes with an 8.8-inch touchscreen infotainment system with Android Auto and Apple CarPlay, cruise control, steering-mounted audio controls, climate control, a JBL sound system, powered driver’s seat, and 7-inch coloured multi-info display. We can expect connected car tech with the Gravitas too. Safety is covered by six airbags, ABS with EBD, parking sensors, and electronic stability control.

The Gravitas will be powered by the FCA-sourced 170PS 2.0-litre diesel engine that can be had with either a 6-speed manual or 6-speed torque converter automatic transmission. A 1.5-litre turbo petrol engine could be offered later.

The Gravitas is likely to command a premium of Rs 1 lakh over the Harrier which is priced from Rs 13.84 lakh (ex-showroom). It will rival the MG Hector Plus and the upcoming 2021 Mahindra XUV500.