The Mahindra Thar Could Soon Have A Rival In India!

The Force Gurkha, Thar’s closest rival, has been spotted testing in its production avatar 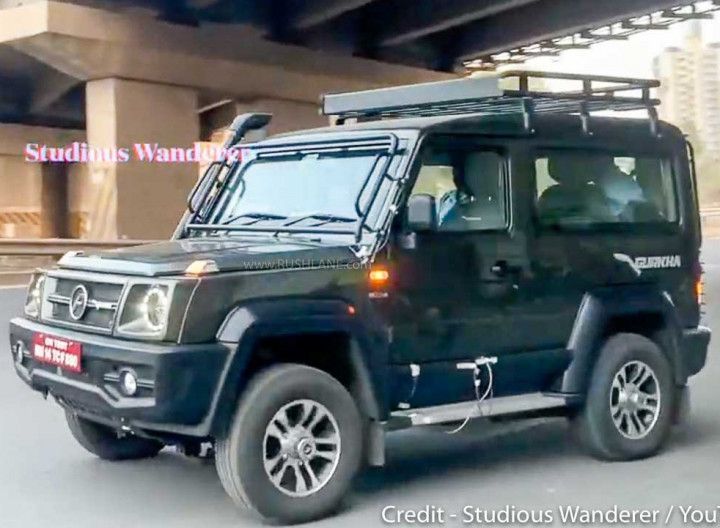 The Mahindra Thar is currently the only lifestyle off-roader one can buy below Rs 20 lakh (on-road). It, however, will soon be accompanied by the Force Gurkha, which has been spotted testing in the country. The Gurkha, as seen in these pictures, also gets a few updates over the version showcased at Auto Expo 2020.

The Gurkha’s exterior remains largely unchanged compared to the model seen at the Auto Expo. But it’s a good thing, as the round headlamps, slatted grille, and the upright, boxy silhouette remind us of the G-Class. The raised suspension and the 16-inch tyres with chrome-plated alloys look ready to take a beating.

However, it’s the interiors of the Gurkha that see a few changes. The dashboard’s layout is still utilitarian compared to the Thar. However, Force has spruced up things with a gloss black trim around the air-con controls. The interior come finished in an all-black colour scheme instead of black-brown finish of the show car at Auto Expo 2020. The touchscreen infotainment system, though, is still an aftermarket unit. It also comes with captain seats for rear occupants and jump seats for the third row.

In terms of features, we expect it to get the basics covered, including front power windows, remote locking, and a multi-info display. A manual-aircon will be part of the package as well. Safety will be taken care of by dual airbags, ABS with EBD, and rear parking sensors. The Gurkha, from what we can see in the images, also has a snorkel, likely to be an official accessory.

The test mule, seen here, is powered by a 2.6-litre common-rail diesel engine churning 90PS and 260Nm. This motor is offered with a 5-speed manual transmission. A low-range transfer case is provided to make life easier on the rough stuff. Plus, there’s manual-locking front and rear differential, which the Thar misses out on completely. The 2.2-litre diesel unit, which generates 140PS and 321Nm, could come at a later date.

Prices for the Force Gurkha are likely to be revealed in the coming weeks. We expect it to command a premium over the older model that’s priced from Rs 9.75 lakh (ex-showroom). The Gurkha will lock horns with the Mahindra Thar and the upcoming Maruti Suzuki Jimny.