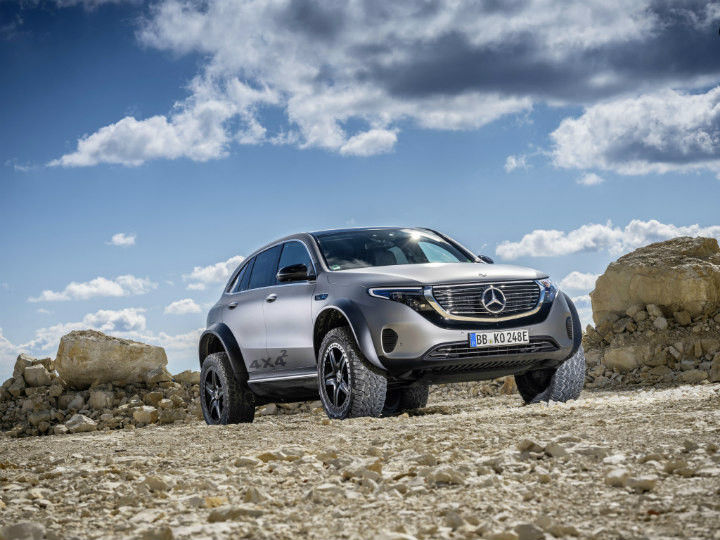 Mercedes-Benz had begun its assault into the electric SUV segment with the unveil of the EQC electric SUV at the LA Auto Show in November 2019. Well it's almost a year since then, and the carmaker has gone bonkers in this while with the EQC by unveiling a one-off EQC 4x4 concept. It showcases the future of electrified 4x4 Mercedes models with some extreme off-road hardware.

The body of the concept remains pretty much the same as the standard production model, aside from aggressive wheel arches and massive 20-inch wheels with off-road tyres. It also boasts  greater approach, departure and breakover angles than the standard model at 31.8 degrees, 33.0 degrees and 24.2 degrees. Ground clearance is over twice as high at 293mm, with fording depth up by 150mm at 400mm. There’s also a special pair of headlights that double up as loudspeakers as part of the mandatory external noise generator (Acoustic Vehicle Alert system) for safety purposes.

Much of these gains including the height increase of 20cm is down to the switch to portal axles. This means that the wheels are not positioned at the height of the axle centre. Instead they are lower down on the axle hubs, leading to the entire vehicle moving up in height. That said, the suspension is still attached to the same body mounting points as the standard model.

Under the hood, the EQC 4x4 retains the same mechanicals as the standard model with a twin-electric motor setup pushing 408PS and 760Nm to all four wheels, juiced up by an 80kWh battery pack. A new off-road mode from the GLC has been added, which while using targeted brake interventions, allows better torque curve when maneuvering on loose soil.

As the Mercedes-Benz EQC 4x4 is a one-off concept, don’t expect it to make it into production. That said, its 4x4 system may lay the groundwork for a future electric G Class. The carmaker recently unveiled its strategy for the future by announcing five new electric vehicles in the works. Back home, the EQC was recently launched at an introductory price tag of Rs 99.30 lakh (ex-showroom). It will rival the upcoming  Audi e-tron and Jaguar i-PACE.