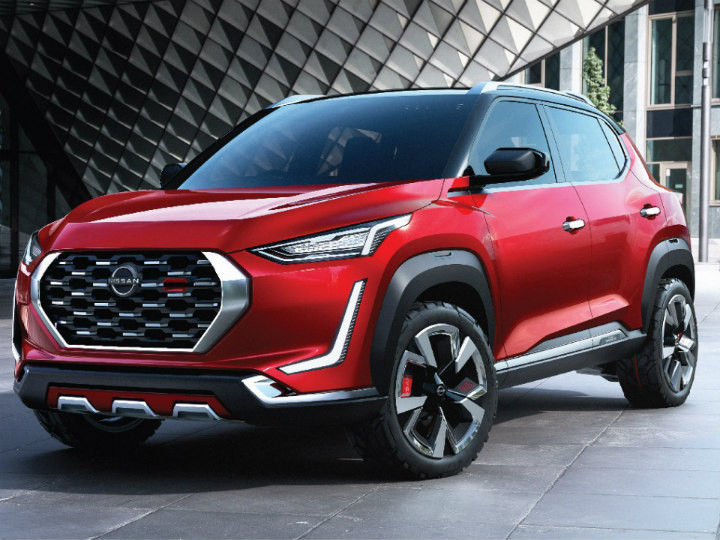 After teasing its upcoming Magnite sub 4-metre SUV, Nissan has finally taken the wraps off its new sub 4-metre SUV in concept form. This coincides with the debut of Nissan’s new, sleeker and more minimalistic two-dimensional logo.  It sports a bold design and is expected to be packed with premium features. But it will be a while before we see the launch of the production-spec SUV as the coronavirus pandemic has delayed proceedings to a likely launch in January 2021.

At a glance, Nissan’s new SUV concept sports a bold exterior design which should bode well for the production-spec model since it will be a toned down version of the concept. It also has some Datsun styling bits like a large single-piece front grille and ‘L’ shaped LED DRLs. Aside from that, the concept gets a crossover-like silhouette and strong body cladding all over, giving it an SUV-esque feel. Heading towards the rear, it gets split wraparound tail lamps with LED elements in them.

While the interiors of the Magnite haven’t been revealed yet, Nissan has given us a few tidbits of what to expect and we can safely say that it will be one of the more feature-loaded SUVs in its segment. Some of the features you could expect include an  8-inch touchscreen infotainment system, cruise control, a 360-degree camera as well as connected car tech. Expect more features such as  Android Auto and Apple CarPlay, connected car suite, climate control, a sunroof, as well as a digital instrument cluster. Safety kit could include around 4 airbags, ABS with EBD, and electronic stability control.

Under the hood, the new sub-4 metre SUV could share its powertrain options with the upcoming Renault HBC (Kiger). We expect it to be offered with the Renault Triber’s 72PS 1.0-litre naturally aspirated engine and a new 1.0-litre turbo-petrol unit that’s likely to deliver around 100PS. Transmission options may consist of a standard manual gearbox and a CVT option for the turbo-petrol motor.

Nissan is likely to launch its new sub-4m SUV (Magnite) at competitive prices starting from around Rs 5.5 lakh (ex-showroom). Once launched, it will take on the likes of the Tata Nexon, Ford EcoSport, Maruti Vitara Brezza, Hyundai Venue, the Mahindra XUV300 and the upcoming Renault Kiger.