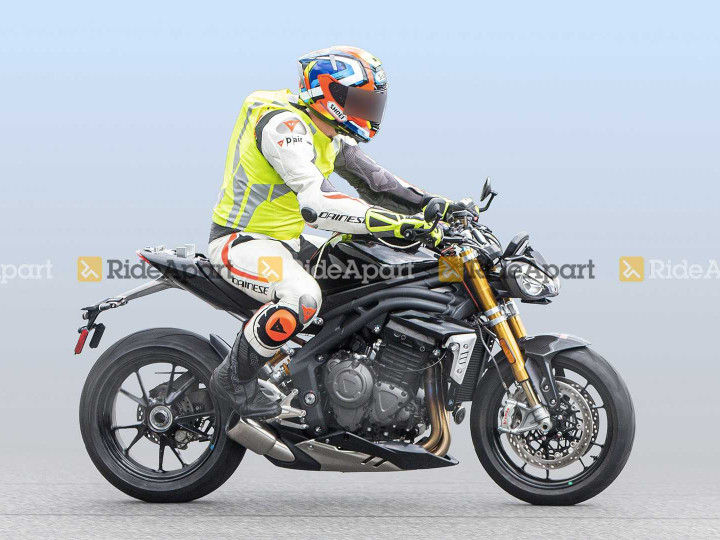 The BS6 storm has mostly blown over in India, but over in Europe, many manufacturers are still gearing up for the shift to Euro5 emission norms. Iconic British brand Triumph is no exception to this, and it’s using the opportunity to comprehensively overhaul its flagship naked roadster: the Speed Triple. The bike has been spotted testing ahead of an official launch next year, and the pictures make for some very interesting findings.

The Speed Triple was the original trendsetter for factory-built streetfighters when it first rolled off the lines in 1994, but the current bike has fallen behind its competition somewhat. While the likes of the MV Agusta Brutale 1000 and Ducati Streetfighter V4 are churning out upwards of 200PS, the Triple has to make do with a modest 150PS from its 1050cc motor. That’s all set to change very soon though, because the updated bike seems to be powered by a new engine.

Displacement is expected to go up to around 1160cc or even 1200cc, but this is more than just a simple boring-out job. The engine casings on the test bike are very different to those seen on the current bike, and the oil cooler/radiator has disappeared as well. The clutch is mounted higher up than before, leading us to believe that the bike will use a compact, vertically-stacked gearbox.

The end result should be a power output in the range of 175PS, which though not quite as high as some of the Italian competition, should equip the Speed well enough to take on the likes of the BMW S1000R (also recently spotted testing). Furthermore, the current Speed Triple’s healthy 117Nm torque figure is already on par with the Ducati offering, and this will only grow further with the updates, so real-world performance should be plenty quick on the new bike.

One change that might not go down so well with fans is the repositioning of the exhaust system: gone are the gargantuan underseat cans of the old bike. Stricter emission norms have compelled Triumph to upsize the catalytic converter and house it in the belly of the bike, meaning that the Speed Triple now has to use a stubby side-exit instead.

Also seen in the spy shots is a quickshifter which will almost certainly be of the bi-directional kind. And if its younger sibling the Street Triple is anything to go by, the new Speed will also get a whole host of electronic rider aids like IMU-assisted traction control and cornering ABS, wheelie control and launch control, in addition to the five riding modes that it already packs. Convenience will be taken care of by cruise control and backlit switchgear.

The test bike’s frame looks visually similar to the outgoing model’s, but we’re sure that Triumph has at least beefed it up if not completely redesigned it to handle all the extra firepower on tap. As before, we expect there to be a lower-spec ‘S’ variant suspended on Showa units, alongside a range-topping ‘RS’ (seen in these images) variant equipped with Ohlins suspension and perhaps even Brembo stylema calipers that are the crème de la crème of the braking world at the moment.

It would be a damn shame if we couldn’t tell the new bike apart after all these updates, so Triumph has also restyled the Speed Triple. The traditional bug-eyed headlights have made way for a slightly meaner-looking setup that’s more similar to the current Street Triple RS. Also resigned to the history books is the little ram air intake earlier seen between the two headlights.

We’re a little surprised that the test bike doesn’t seem to feature a flyscreen, but don’t worry, we’re quite sure the production bike will get one. On the upside, we can see that the Speed will retain its current TFT dash setup, and will quite likely gain Bluetooth connectivity, phone-based navigation, music playback and phone call functionality, GoPro control and a variety of different display formats.

With the Euro 5 deadline for bikes all set to kick in on January 1, 2021, we expect the updated Speed Triple to break cover sometime towards the end of this year. As the only triple-cylinder supernaked offering on the market, it’ll offer a unique experience somewhere in between twins like the manic KTM Super Duke R and inline 4-pots like the BMW S1000R. Triumph will most likely bring the new Speed Triple to India as a CBU a few months after its global launch.