Both models sport a crossover-like design, modern features and a variety of powertrain options 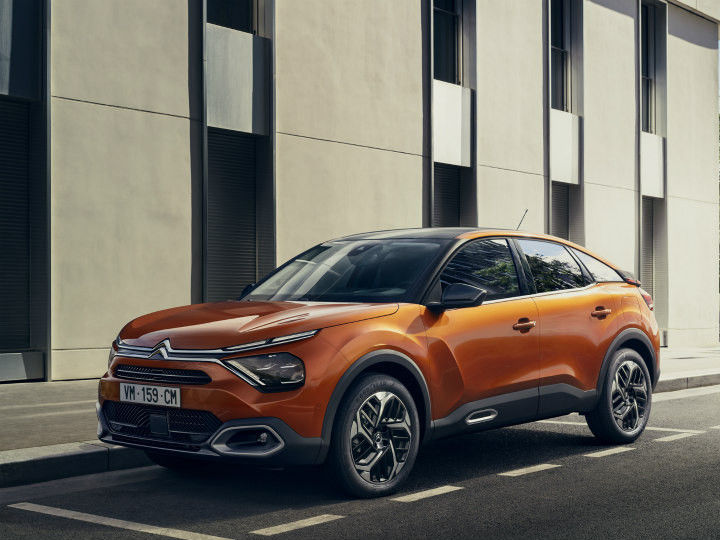 Shortly after Citroen partially revealed the next-gen C4 and e-C4 crossover, the carmaker has finally introduced the new models in the international market. Not only do they sport a funky design and modern features, one of them is an all-electric iteration alongside the petrol and diesel engines. Here’s more about it:

On the outside, the new C4 models sport a crossover-like design thanks due to bits like a sloping roofline, flared wheel arches as well as a butch stance despite Citroen calling it a hatchback. The front end features a slim grille, LED headlamps with LED DRLs and LED fog lamps that resemble its larger sibling, the India-bound C5 Aircross. Both models get a wide variety of wheels to choose from in the size range of 16-inches to 18-inches. One of the major design highlights at the rear is the unique V-shaped tail lamps to round off an aggressive design philosophy.

Heading inside, the C4’s cabin is relatively simplistic but sports a variety of modern features. Some of them include a digital instrument cluster, a panoramic sunroof, dual-zone climate control, a 10-inch floating touchscreen infotainment system with connected tech features, split AC vents as well as a head up display. Citroen has also introduced a nifty Smart Pad support on the dashboard that can act as a holder for your tablet.

The main talking point of the next-gen C4 is what’s under the hood. Not only does it come with petrol and diesel engines, but also an all-electric powertrain. The petrol mill is a PureTech 1.2-litre three-cylinder engine offered in three states of tune -- 100PS, 130PS and 155PS. The diesel engine on the other hand is a 1.5 litre mill offered in 110PS and 130PS state of tune. All variants will be offered in front-wheel drive with the lower end petrol and diesel variants paired to a 6-speed manual transmission and the higher end variants being paired to an 8-speed automatic gearbox.

The all-electric e-C4 is powered by a 50kW electric motor that produces 136PS of power and 260Nm of torque that propels the EV hatchback from 0-100kmph in 9.7 seconds and a top speed of 150kmph. Range figures are rated at 350km (WTLP claimed) on a full charge. It supports fast charging capabilities up to 100kW that gives the EV a charge from 0-80 per cent in 30 minutes. It also features technical wizardry in the form of regenerative braking to increase the EV’s range.

Offered in a total of 31 exterior combinations, the two C4 models will go on sale later this year, with deliveries slated to commence by the end of 2020. Will either one of them make it to Indian shores anytime soon? At the moment, the carmaker’s current focus in India is to launch the C5 Aircross midsize SUV by Q1 2021. In addition to this, their second car for India will be making its world debut in India in the same year. So don’t expect the C4 anytime soon.