The Polo facelift is here with differences so minor that spotting them would require multiple glances. So, we thought we’d help 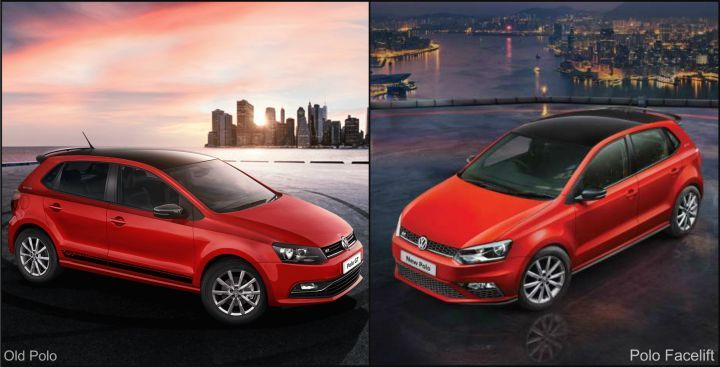 Volkswagen has taken the wraps off the facelifted version of the Polo and Vento in India today. Prices for the Polo start from Rs 5.82 lakh and go all the way up to Rs 9.76 lakh for the GT TSI. It’s no secret that Volkswagen has been milking the same car since its inception in 2009. It's been a long ten years and we still get the same car while markets abroad have got the MK6 since 2017. You don't have to be good with numbers to figure out that’s more than 2 years. Nevertheless, the Polo facelift is here with differences so minor that spotting them would require multiple glances. So, we thought we’d help:

To put things more clearly, these are the list of new changes in the new Polo:

The twin slat grille has given way for a honeycomb mesh grille finished in gloss black with various other bits that are inspired from the GTI hot hatch. Volkswagen has also introduced a new GT-Line variant, which is basically the GT TDI and GT TSI that was previously available. What’s offered in the GT-Line trim are new fender badges, a side decal strip, black mirror caps and a blacked-out roof. Apart from the above mentioned changes, the new Polo remains the exact same.

If you like the old Polo’s interiors, you’ll like the new one. Why? It's the exact same. No changes. None. Nada. Zilch. But we believe the new Polo will get a slightly different fabric option. That remains to be confirmed as the pictures we’ve seen so far don’t really tell much. What it now gets is Volkswagen Connect that comes with various features like service appointment through smartphone, fuel consumption monitoring, breakdown call, portability between other Volkswagen cars and more. It also alerts the dealer in case of an engine malfunction. Other notable features that are carried over are cooled glovebox, cruise control, height-adjustable driver’s seat and automatic climate control and the touchscreen infotainment system with Android Auto and Apple CarPlay. It also gets ESP (GT TSI), 16-inch alloy wheels, and hill-hold assist (GT TSI).

There are no mechanical changes to the new Polo whatsoever. That means it still continues to use the 1.0-litre MPI engine and the 1.5-litre TDI in the standard variants, while the new GT Line gets the 1.2-litre TSI coupled with the 7-speed DSG and the 1.5-litre TDI in a higher state of tune. The 1.0-litre unit puts out 76PS of power and 95Nm of torque while the 1.2-litre TSI turbo petrol is good for 104PS and 175Nm. The 1.5-litre motor, meanwhile, is available in two states of tune. The standard Polo gets 96PS and 230Nm while the GT TDI pushes out a solid 110PS and 250Nm of torque. A 5-speed manual is offered with the diesel engines and the 1.0-litre MPI petrol engine.

As you can see, Volkswagen is also charging a premium ranging from Rs 10,000 to Rs 16,000 for both the standard petrol and diesel Polo variants. The German brand is yet to release the detailed variant-wise price list, but we expect each variant to carry more or less the same premium. Meanwhile, the GT TDI and the GT TSI now commands a premium of around Rs 16,000. No doubt that the welcome changes are an addition, as the Polo now looks sharper with the GTI-inspired styling cues. But our question remains the same - How much longer will we have to wait for the New Polo?