Would You Rather: Buy A New Kawasaki Ninja 1000SX Or A Used 2011 Mercedes-Benz E-Class?

Can Japanese thrills outperform German luxury? We find out 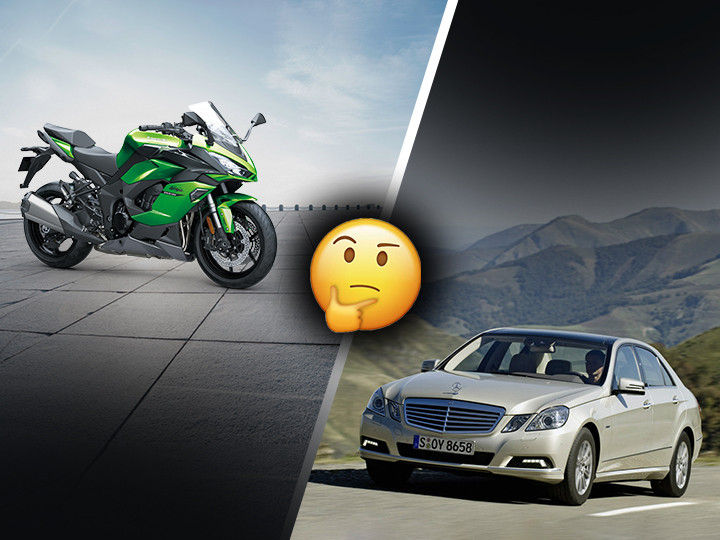 In our previous edition of ‘Would You Rather’ series, we pitched a new KTM 790 Duke against a used 2011 BMW 3 Series -- two extremely fast machines known for blazing their rear tyres.

This time, we are comparing the recently launched 2020 Kawasaki Ninja 1000SX with a used 2011 Mercedes-Benz E-Class 350. Both cost around Rs 11 lakh. Question is, which one of them is a worthwhile investment? Let’s find out:

Starting with the mechanicals of our competitors, the Kawasaki Ninja 1000SX features two cylinders less than the Benz. It’s powered by a 1043cc inline-four motor producing 142PS at 10,000rpm and 111Nm. The litre-class engine is paired to a 6-speed transmission and features a bi-directional quickshifter. Kawasaki claims the Ninja 1000 can clock an impressive top speed of above 250kmph and sprint to 100kmph in under 4 seconds, which is supercar territory.

Coming to the Mercedes-Benz E-Class 350d, it is powered by a six-cylinder 3.0-litre turbo-diesel engine. While it doesn’t boast mind-boggling power at 210PS it is quite torquey at 490Nm. Paired with a 7-speed automatic transmission that distributes power to the rear wheels, the 350d goes from 0-100kmph in 6.2 seconds and reaches a top speed of 250kmph. As you can see with respect to performance, the Ninja has the upper hand but the German isn’t out of the fight yet. The petrol counterpart is a bigger 3.5-litre six-cylinder naturally aspirated mill delivering 272PS and 355Nm. Both six-cylinder mills are a lot smoother than the four-pot engines of the current E-Class.

While the E 350d shows its age in this department, it does get some driver assists in the form of an ABS, brake assist, and electronic stability control. But if you look at it another way, it is old school and more of a driver’s car. That means you need to be more involved to get the best out of the E-Class and its 3.0-litre turbo-diesel and 3.5-litre petrol engines.

Getting away from outright performance and more towards creature comforts, the Kawasaki Ninja 1000SX now gets a thicker and wider pillion seat for better comfort. Aside from that, it sports some modern bits such as LED headlights and turn indicators, and a large 4.3-inch colour-TFT instrument console with Bluetooth connectivity. What’s more, it can be connected to your smartphone via the Kawasaki Rideology app.

While the E-Class is a little old fashioned, it still exuberates the premium luxury you get in a traditional Mercedes-Benz cabin. Stand out bits include heated front seats, adjustable steering wheel, rear AC vents, moonroof, electric folding rear view mirror, keyless entry, a 7-inch infotainment system at the front, as well as two infotainment screens at the rear. It also gets a host of safety kit including airbags at the front, sides and the rear.

If the competition was purely on cosmetics, the Ninja 1000SX would win hands down with its aggressive looks and funky colour options: Metallic Graphite Grey/Metallic Diablo Black, Emerald Blazed Green/Metallic Carbon and Grey/Metallic Graphite Grey. The E-Class feels a bit archaic and understated in comparison. In simpler terms, it is a big German sedan and high on snob value.

At the end of the day, both competitors have their strengths and weaknesses. If you’re up for a modern, aggressive offering with the bonus of BS6 compliancy, the Kawasaki Ninja 1000SX is the one to go for. On the other hand, if you prefer a more luxurious offering with six-cylinder diesel and petrol engines, you should pick the Mercedes-Benz E-Class. But keep in mind that maintaining the E-Class will be a difficult task if anything goes awry, whereas with the Ninja 1000SX, you’ll get the benefit of a warranty plan.

Being a car guy, I usually prefer a four-wheeler as I’m more comfortable pushing them to the limit over a two-wheeler. But in this case, I’d make an exception with the Ninja 1000SX as it's not only a heck of a looker but also got some performance and modern bits to back it up. The E-Class is a little too old school for my liking.