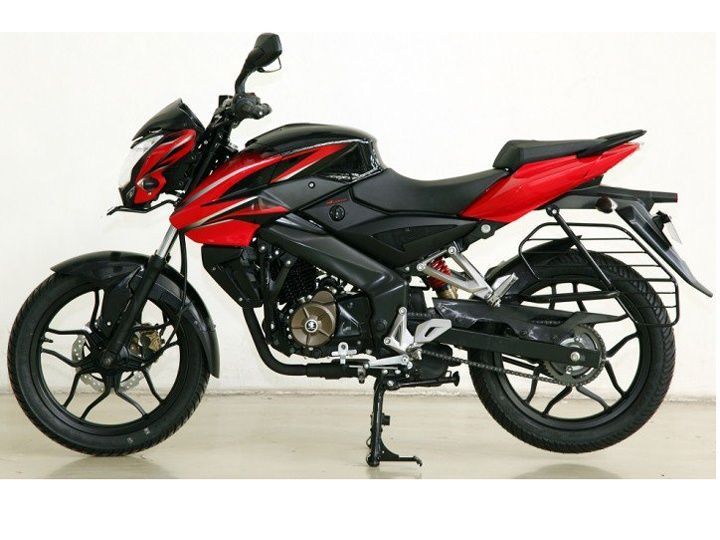 Competition in the 150cc segment has gotten tougher with a slew of new entrants. The Bajaj Pulsar 150 still remains the king of the 150cc segment but now has started to show its age cosmetically and mechanically. To address this issue, Bajaj will ride in the new Pulsar 150NS that was showcased in Turkey last year. From the pictures it is clear that the new Bajaj Pulsar 150NS will carry forward the same design language as seen on the Pulsar 200NS. The brute streetbike styling should enable it to stand out among its rivals and also appeal to youngsters. Switchgear and the part-analogue-part-digital instrument console have been carried forward from its 200cc sibling. The Bajaj Pulsar 150NS has a slimmer tail section; missing tyre hugger and skinnier rear tyre are the visual differences between the two Pulsar offerings. The air-cooled single cylinder unit will be sourced from the Pulsar AS150 which is good enough for 17PS power at 9500rpm and maximum torque of 13Nm at 7500rpm.

The latest Hero offering to get equipped with the i3S (idle Start Stop System) is the 125cc Super Splendor. The new Super Splendor iSmart will be showcased at the 2016 Auto Expo and make its debut by March 2016. Hero wouldn’t be stopping itself only on the mechanical front and expect the new Super Splendor iSmart to undergo cosmetic changes. Expect the body lines to be sleeker and sporty with restyled graphics on the lines of the Splendor iSmart. The instrument console will be a new three-pod unit with an i3S light and side stand indicator being new additions. The powerplant wouldn’t be most likely tinkered with, and the 124.7cc unit will still churn out 9.12PS of power and 10.35Nm of peak torque, mated to a 4-speed gearbox. The start/stop system should make the Super Splendor even more fuel efficient with a claimed mileage of around 85kmpl that should make it the most fuel efficient 125cc motorcycle on sale in the country. Expect the new Hero Super Splendor iSmart to be priced around a premium of Rs 3,000 higher than the standard variant.

The TVS Apache is among the most popular names in the Indian motorcycle space but it’s been a really long time since any new product has entered the Apache family. All that will change at the 2016 Auto Expo in Delhi as TVS will showcase the new Apache 200. The new motorcycle will be the flagship offering from the Hosur based manufacturer and will take design cues from the Draken concept that was showcased at the last years Auto Expo. The bike will be powered by a 200cc displacement single-cylinder motor that will be mated to a 6-speed gearbox. The TVS Apache 200 is expected to churn out around 25PS of max power and has kept the KTM 200 Duke as its benchmark in terms of performance. The bike will employ telescopic front forks and monoshock unit at the back to handle suspension duties. Braking will be done by petal disc brakes and ABS will be an optional extra.

With the new Star City+ and the Scooty Zest already on sale, TVS will not shift its focus to bring an updated version of its best-selling commuter, the Victor. The Chennai-based bike maker had revealed its plans of introducing the new Victor at the Star City+ launch but since then only test bikes have been spotted as the launch of the motorcycle got delayed. Even when the Victor was launched almost a decade back, it did well to bring the TVS brand back on the map. And now by re-launching the Victor nomenclature, the bike maker wants to capitalise on one of the biggest segments in the two-wheeler market. The new TVS Victor will sport the same 109cc EcoThrust engine that we have already experienced on the Star City+. In fact it will also be based on the same platform but will be placed above the Star City+. That said, exact details of the new Victor are still sketchy but considering its product placement, expect it to come with additional features. There is also a possibility that TVS might launch the Victor with a 125cc motor as the Phoenix isn’t performing well in the 125cc segment and could be phased out.

With the Bajaj Discover brand failing to garner the numbers expected, Bajaj Auto is planning to phase out the brand and introduce a new entry-level brand that would be positioned below the Pulsar range. Bajaj Auto is to be blamed themselves for the poor performance of the Discover brand as they introduced too many motorcycles with the Discover moniker that confused the buyers. Also the motorcycles were replaced with very short notices which affected the resale value of the bikes, and many prospective buyers chose to stay away from the brand given the uncertainty surrounding it. Our guess is that the first offering under this brand could be a 125cc motorcycle with a mature design that would appeal to the masses and will not be like any of the Bajaj offerings currently on sale.