New Bajaj Pulsar AS200: What to expect?

Bajaj is slated to launch a new motorcycle on April 14 and we are betting our money on the Pulsar AS200. Here's what you should expect from the new Bajaj Pulsar AS200 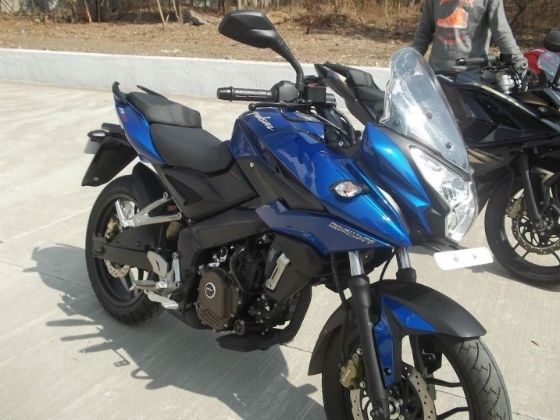 Looks: In the Pulsar AS200, Bajaj follows what they did with the Discover 150F recently – added a quarter fairing to an already established product. And surprisingly it does look quite good. The quarter fairing up front has been integrated well into the tank which gives it a sharp look. The large windscreen above the headlight is not just functional but adds to the overall charm of the bike too. The tank, the seats and the rear cowl is a straight lift from the naked 200NS, but by no means does it look disproportionate.

Engine and Performance: With Bajaj’s product portfolio in mind, the Pulsar AS200 is sure to be placed above the naked 200NS but below the recently launched RS200. Considering that the RS200’s fuel injected motor will affect the price of the AS200, to keep costs in check, the Chakan-based bike maker will plunk the same carburetted unit that works force on the 200NS. The 199.5cc unit of the naked Pulsar 200NS makes 23.5PS of power and 18.3Nm of torque and comes mated to a six-speed transmission. Yes, the added weight of the fairing and its frame will have a negative effect on the overall performance. But since it is a single piece unit like the Pulsar 220F, the increase in weight won’t really be substantial.

Features: With regards to features, the AS200 will have pretty much everything that we have seen on the 200NS including semi-digital instrument cluster with two trip meters, split seats and 10-spoke alloy wheels. Braking duties will be performed by a 280mm petal disc up front and a 230mm disc at the back. Talking about brakes, the AS200 will miss out on Anti-lock Braking System in order to keep costs in check.

Parts Sharing: Bajaj has always been smart in planning, developing and pricing its products. From the Pulsar 150 to the Pulsar 220F, all the variants have always shared a lot of the same parts, which has been one of the key factors to the brand’s success so far.  And the AS200 is not going to be any different. The tank, the headlight assembly, the rear panel, the seats are just some of the cosmetic part that are borrowed from the 200NS. In fact, the mechanicals too will remain the same for both the bikes which will ensure that the AS200 is priced competitively.

Price: Buyers of this segment of motorcycles are price sensitive and want value for money. With the kind of features and equipment the Pulsar AS200 has on offer, we expect it to be priced around Rs 10,000 more than the 200NS at around Rs 1 lakh. And at that price it will be quite an interesting offering. What’s more, considering that it falls in the same class as the Pulsar 220F, Bajaj might just discontinue the old quarter faired offering as it has started to age both cosmetically and mechanically. Although to fill the shoes of the Pulsar 220F might just be one helluva task for the AS200.